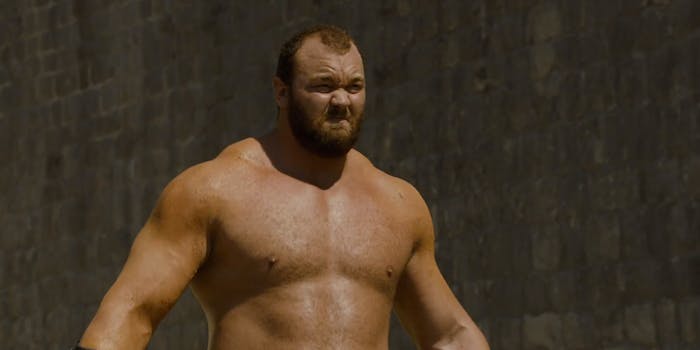 And he made it look easy.

The Mountain has proven that he’s fantastic at smashing heads and smashing records.

Just last month, Hafthór Júlíus “Thor” Björnsson, aka the latest actor to play the Mountain on Game of Thrones, broke a 1,000-year-old record and became the World’s Strongest Viking. This week, he broke another Guinness World Record at the Arnold Strongman Classic in Columbus, Ohio.

Björnsson and American competitor Mike Zolkiewicz faced off in a Weight Over Bar contest, which involves tossing a 56-pound kettlebell over a bar that increases in height—and hopefully not hitting the audience in the head.

Both men, dressed in kilts, valiantly attempted the feat as the bar grew ever higher. Although Björnsson was sore from a previous competition, he attempted the feat at a record-setting height of 19’3”. And he didn’t just hit it—he made it look easy.

The new level knocked Zolkiewicz out of the competition, and while the crowd thought that Björnsson would attempt throwing the kettlebell at 20 feet, he changed his mind.

“I want to save it till next year,” he told the Columbus Dispatch.

With this victory, Björnsson beat his own record of 19’2”, which he set at the Highland Games back in September. Before that, the record was held by Zolkiewicz.