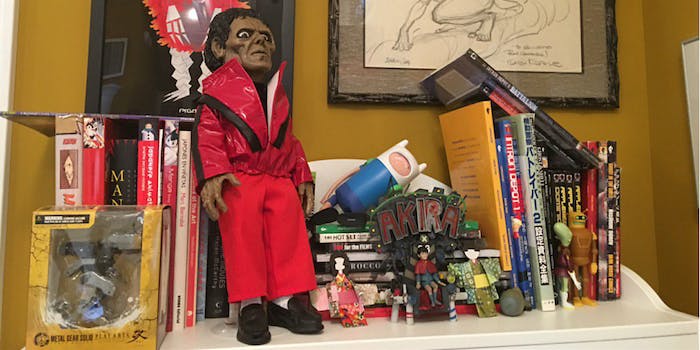 After years of gathering, purchasing, and perfecting their collections, many geeks are more than happy to show off everything they’ve obtained—and Oscar-winning director Guillermo del Toro is no exception as he shared his own collection with fans.

Del Toro posted several photos of what he dubbed his “Anime / Manga / Japan cabin” on Twitter, and it’s evident from the pictures he isn’t exaggerating about the “cabin” part. The room is easily stuffed with more books (in both English and Japanese), pieces of memorabilia, artwork, and statues than we can imagine.

From a glance, there are a few touches of del Toro’s work in the photos including a life-size Faun (from Pan’s Labyrinth) and his Nickelodeon Kids Choice Award for Puss in Boots. But much of the room is a dedication to what he loves.

And there’s a bit of everything. He has a bookshelf dedicated to Hayao Miyazaki films, several books and statues from Akira; figurines from My Neighbor Totoro, Adventure Time, Futurama, The Simpsons, and Angry Birds; and several completed manga series. We could spend hours trying to identify everything in that room.

It’s unclear if there’s any actual room to sit down and dive into any of those volumes in that room, but it still looks like quite the geek paradise for del Toro when he’s not working on films (and perhaps even when he is).

Some (not all) bookshelves from Manga / Anime / Japan cabin pt 6 pic.twitter.com/QREyKKoTJ9

It’s a vast enough collection to inspire its own potential movie spin-off.

This needs to be the focus of the heist in an all-nerd reboot of OCEAN’S 11. https://t.co/ZMElqxD4kt

So when can we all visit?