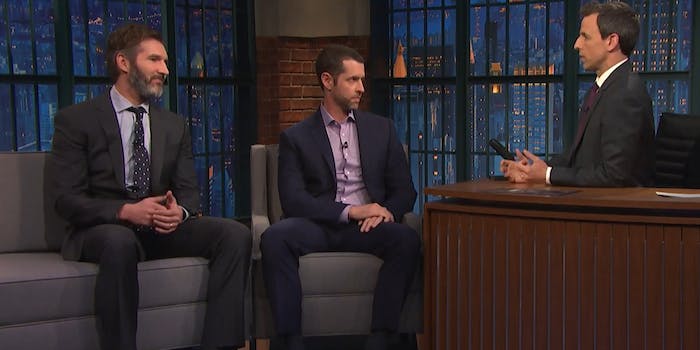 The 'Game of Thrones' creators might be making changes from the books, but they know their GoT trivia.

As Game of Thrones wears on, the show is veering further away from the original novels. The upcoming fifth season looks like an even bigger departure from A Song of Ice and Fire, leaving some fans wondering if the show’s writers are making too many changes.

On Wednesday night, Game of Thrones showrunners D.B. Weiss and David Benioff appeared on Late Night With Seth Meyers to put those worries to rest.

There are a lot of fans out there who want to quiz Benioff and Weiss about their A Song of Ice and Fire knowledge, but it sounds like George R. R. Martin did that already. Benioff describes the “evil glint in [Martin’s] eye” during their first meeting, when the author grilled the two aspiring showrunners on Game of Thrones trivia.

You can rest easy in the knowledge that these guys really do know A Song of Ice and Fire back to front—unlike actress Maisie Williams (Arya Stark), who has never read the books.

Weiss also mentions that among all the fans who regularly ask them about the future of the show, there is one guy who “nailed it” and predicted a major plot twist. So, somewhere out there is a Game of Thrones fan who knows exactly what happens next in the show. But as ever, Benioff and Weiss aren’t telling.