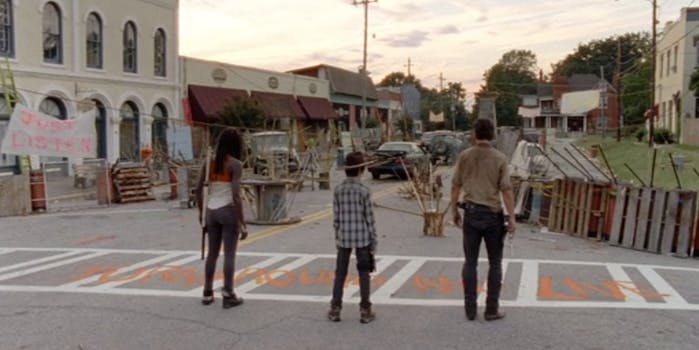 We might not live in the world of The Walking Dead—which is actually probably a good thing—but you can now own a part of it.

The town of Grantville, Ga., which is located south of Newnan in Metro Atlanta, is heavily featured in the Walking Dead season 3 episode “Clear” as Rick, Carl, and Michonne go on a weapons run in Rick’s hometown and run into a familiar face. Although the name of Grantville isn’t mentioned by name, some of the town’s defining features are noticeable in the background for those familiar with the area.

The entire town of Grantville isn’t on the market, but rather just the downtown section. Former Grantville Mayor Jim Sells purchased nine buildings out of foreclosure during the recession years ago, but after renovating them, he’s looking for new owners.

“The hard work has been done,” Sells told Atlanta news station WXIA. “We’re looking for somebody to put it all into action.”

The eBay advertisement for Grantville’s downtown stresses that it could ultimately be profitable for the next owners; Grantville is often scouted by the movie industry for shoots, and the seller claims that Grantville is great for someone “trying to invest in an area that’s about to burst.”

“Three movies just signed up to film in Grantville two very well known actors will be staring [sic] in the roles,” the seller wrote. “The other movie is a sequel to the very popular ‘The Ring.’ These movies are another source of income for the next owner.”

Along with the shoot, the new owners could jump on the biggest industry to hit Grantville: the tourists.

“We have people coming from all over the world because of the Walking Dead, that’s paying the bills downtown,” Sells said.