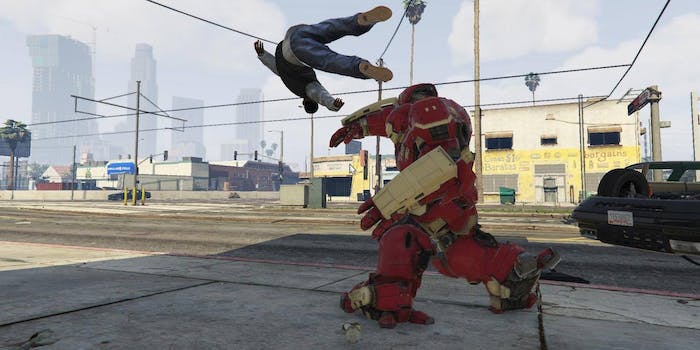 If you want a little extra help busting things up in the world of Grand Theft Auto V look no further than this mod. Created by Julio, the PC mod lets gamers don a mini version of the Iron Man Hulkbuster armor as they cause chaos in San Andreas.

As seen in the videos below, the armor looks pretty impressive in the Grand Theft Auto setting. While there’s no Hulk for the Hulkbuster to battle here, it still looks like a lot of fun throwing cars, flying around, and facing cops.

Julio has also created other mods for Grand Theft Auto, including another Iron Man suit. You can learn more about his mods on his Facebook page and see them in action on his YouTube channel. He also has a Patreon for his modding which currently lists what he plans to tackle next in Grand Theft Auto V.