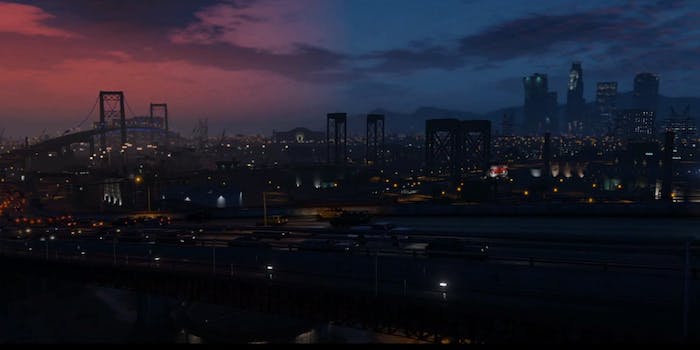 DigitalFoundry put together a video of the PlayStation 3 and PlayStation 4 versions of Grand Theft Auto V, and… just watch.

Finally there’s a game that shows off the power of next-gen game consoles.

When Grand Theft Auto V was released, it set a new standard for graphics quality on the Xbox 360 and PlayStation 3. The draw distances (the distance from the camera at which objects still appear on screen) and the quality of the lighting and water effects were particularly impressive.

Grand Theft Auto V looked so good that it made gamers wonder why they even needed an Xbox One or a PlayStation 4. Those next-gen consoles cost $500 and $400 each respectively, and at the time, hadn’t produced any games that were clearly leaps and bounds beyond what the Xbox 360 or PlayStation 3 had to offer.

It’s ironic that the game that effectively served as an argument for ignoring the next-gen consoles in the short term just became an argument for why the PlayStation 4, at least, is clearly superior to the old system. (This is the first time I’ve caught myself referring to a PlayStation 3 as an “old system,” for what that’s worth.)

DigitalFoundry, a premiere source of hardware performance comparisons, put together a video of the PlayStation 3 and PlayStation 4 versions of Grand Theft Auto V, and… just watch.

Grand Theft Auto V comes with a story-based mode, and a multiplayer version called Grand Theft Auto Online. There’s no story in GTA:O, and hence no ending. You run around, drive, fly, and boat around with your friends, robbing stores, murdering criminals, and causing mayhem while buying apartments, hot cars, new outfits, and bigger guns. In other words, all the stuff that typically passes for “fun” in a Grand Theft Auto game.

After seeing that graphics comparison video, if I’m still playing Grand Theft Auto Online this fall, I’m going to be very tempted to upgrade to the next-gen version of the game, even though I hate paying for the same game twice.