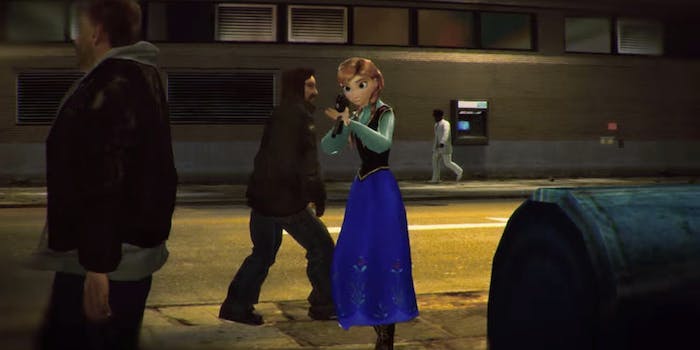 This is the closest we’ll get to ‘Grand Theft Auto: Frozen’

They can't hold it back anymore.

Frozen’s Anna and Elsa are two women you don’t want to mess around with, especially in Liberty City.

Despite coming out months ago, the Frozen love is still going on strong, and after too many covers to keep track of, someone found an even more creative way to parody the film’s two power heroines.

It’s a free downloadable mod for Grand Theft Auto IV, and you play as Anna as she and Elsa shoot up the city. There’s only a small preview of what it looks like, but it’s enough for a fresh spin on an old game, just like other notable mods like a time-traveling DeLorean and Toy Story’s Woody.

If you’d prefer to play as Elsa, the creator already has you covered. It’s small compensation for the Frozen merchandise not available in stores.