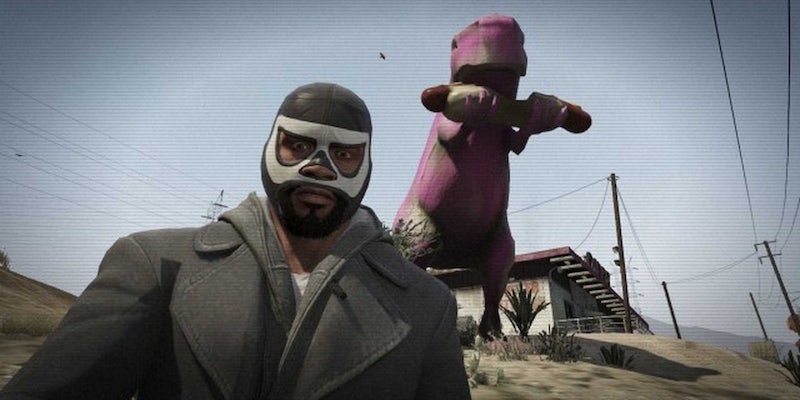 One Gamespot reviewer had the audacity to suggest that maybe Grand Theft Auto V could benefit from a little less mysoginy.

Grand Theft Auto V is kind of popular. As in, over a billion dollars’s worth of popular. Gamers love it, critics showered it with praise, and it’s the fastest-selling videogame of all time.

But for some GTA fans, that isn’t quite enough.

When gaming site Gamespot gave GTAV a mere 9 out of 10 in a YouTube review, many gamers were not pleased. Gamespot received so many negative comments for that they ended up filming a six-minute response video.

Angry gamers even started a petition to get the reviewer fired. After all, he had the temerity to give a popular game 9 out of 10, instead of a perfect score. As Gamespot presenter Johnny Chiodini points out in the response video, this kind of attitude indicates a fundamental misunderstanding of the relationship between professional criticism and being a fan of something.

Firstly, it shouldn’t be essential for everyone to like something for you to enjoy it. If you didn’t agree with the score, that’s fine. That shows you’re capable of having your own opinions. Second, nine out of ten is practically perfect.”

The original review took one point off the game’s final score, on the grounds that the reviewer found GTAV to be “politically muddled and profoundly misogynistic”—a comment that most GTA fans will surely not find very surprising. The franchise is already known for its sexist overtones, and this particular game features a graphic torture scene.

Of course, the comments make a little more sense once you know that the original reviewer was a woman. In Gamespot’s feedback response video, Chiodini makes it pretty clear that at least some of the negative comments seemed purely inspired by this fact.

Chiodini signs off with a rant about the negative impact these comments have on gaming culture.

The thing is, there were so many comments saying that political discourse has no place in game reviews, or that it’s just a game and we should just shut up and deal with it. Really though… what kind of attitude is that? How does that make the gaming community look?

If we ever want to see games being broadly accepted as an artform, or as anything more than a slightly quirky pastime, we have to include politics. We have to ask questions about gender, about the portrayal of characters, and about the limits of satire. Because satire isn’t satire if it doesn’t challenge the thing it copies. That’s just repetition.”

Perhaps Gamespot should just cut and paste that quote underneath every one of their future reviews. It might save a lot of time.