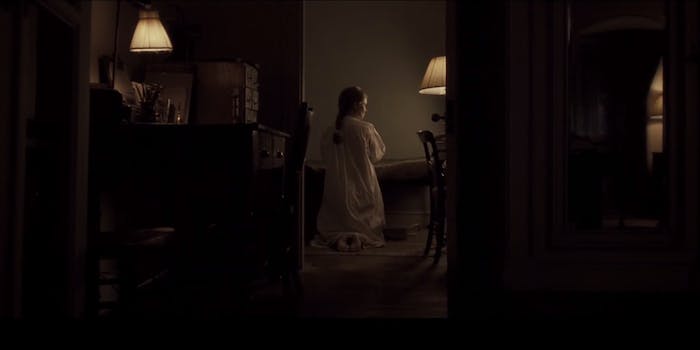 If you dug 'Woman in Black' and 'Crimson Peak,' you're in for seriously ghastly treats.

Looming mansions, figures in the shadows, remote estates in isolated locations… if this is the sort of thing that gets your spine tingling, you’re probably a fan of gothic horror.

If you were in line Thursday night for the premiere of Guillermo del Toro‘s highly anticipated Crimson Peak, you might be feeling bereft—the only other similar horror movie on the horizon is Victor Frankenstein, which isn’t exactly refreshing material. And Dreadpunk hasn’t exactly made its way into film yet.

But if you’re wanting more where Crimson Peak came from, you’re in luck—del Toro was obviously creating his film in the tradition of a long line of chilling haunted-house movies and British gothic suspense thrillers. Here’s a few of our favorite must-see gothic films—the perfect mix of melodrama and the macabre.

This film, a brazenly faithful adaptation of Henry James’ classic gothic horror The Turn of the Screw, is a beautiful, superbly acted thriller set on an isolated British estate. Debra Karr’s naive governess and her fraught relationship with her two deadpan young students shocked audiences when it debuted and still does today. (You’ll see why.) It’s also perhaps the quintessential horror version of “well, that escalated quickly.”

Rebecca not only directly influenced Crimson Peak but influenced other movies that also directly influenced Crimson Peak, like 1944’s The Uninvited and the 1946 melodrama Dragonwyck. Daphne DuMaurier’s iconic gothic romance, with its equally famous opening line, is perhaps the most supernatural story ever to have no supernatural elements at all. Alfred Hitchcock won his only Oscar for this film, his American debut that still stands as one of his best works. The phantom of the dead Rebecca looms over this suspense thriller, but all of its characters have become iconic—especially the pernicious Mrs. Danvers and the brooding house, Manderley.

Auteur director Alejandro Amenàbar was thinking of Hitchcock and The Innocents when he wrote, directed, and composed the chilling film score for this gothic Edwardian spook story. The plot is a surreal concept: a woman clings to her devolving sanity inside a house full of malevolent ghosts, all while trying to protect her highly light-sensitive children. Often overlooked and unfairly rated when it came out (due to its proximity to another very famous film with the same premise), The Others has nonetheless held up very well over time, in no little thanks due to great acting from Nicole Kidman and cast and pitch-perfect direction from Amenàbar.

Dario Argento’s beloved horror masterpiece succeeds on every possible level: as a modern gothic featuring a ballet school full of teachers more demented than the ones in Black Swan; as a trippy Italian melodrama whose iconic score routinely shouts “Witch!” at you; as a tour de force in over-the-top blood-red cinematic design; and, of course, as a scare-your-pants-off reminder not to mess with the occult.

Did someone say demented teachers and remote boarding schools and faint whiffs of the occult? If that perks your ears up, Picnic at Hanging Rock is a must-see—if only for the spectacular eerie titular Rock. Directed by the great Peter Weir, this is one of those films that never gives too much away, and perfectly combines elements of weird fiction, gothic horror, and classic Australian walkabout movies—if the outback explorers were dainty turn-of-the-century ladies at an all-girl boarding school.

The original 1989 BBC miniseries of this film (itself an adaptation of a bestselling gothic novel) utilized such a unique and unforgettable place setting—the remote Osea Island, regularly flooded by the sea—that it practically turned the causeway into a character unto itself. Though the the 2012 Hammer remake starring Daniel Radcliffe has its appeal, we prefer the original for a bunch of reasons: the sheer malevolence of the title character, the better, weirder story ending, and more lingering shots of that terrifying causeway. Shiver.

Though in recent years it’s become synonymous with a sexist technique used to undermine the knowledge and experience of women by questioning their mental capacity, the term “gaslight” is a hugely familiar trope in the annals of horror and suspense movies: the undermining of a character’s intuition by making them doubt their own reality. The concept comes from this trope-namer, the haunting film starring Ingrid Bergman, and it’s just as riveting today as it was in 1944.

This British film follows an affirmed ghost-debunker and skeptic in the ’20s, the height of 20th-century spiritualism. After agreeing to catch the “ghost” in an allegedly haunted boarding school—naturally on a remote estate in the wilds of rural England—she quickly finds herself in over her head. This is a surprisingly fun and tense flick, and who doesn’t love Dominic West in his native accent?

Based on “The Haunting of Hill House” by Shirley Jackson, Robert Wise’s psychological thriller/haunted house mystery stands atop the annals of the genre thanks to a master-class in acting from Julie Harris as she undergoes a full-on nervous breakdown.

This film is too-rarely included in horror roundups, probably because no one quite knows what to do with its macabre blend of fantasy, surrealism, and southern gothic elements—and, of course, its video-game origins. But as anyone who’s ever played Silent Hill knows, games give good horror—and so does this unforgettable derelict town full of coal dust and monsters.

In the ’60s, B-movie maestro Roger Corman did a series of acclaimed—and, you know, actually good—adaptations of Edgar Allen Poe works starring Vincent Price. Among the ones worth watching are The House of Usher and Masque of the Red Death, which also features cinematography by horror director Nicolas Roeg. But this one has a standout performance from Price and a truly over-the-top gothic flair that makes it our favorite of the bunch.

Among Jean Rollin’s surreal French horror films is this bizarre, delightfully overwrought gothic piece about a con man who chances upon a nest of sultry pansexual female vampires, who proceed to alternately toy with and torture him and each other. And that’s just the start.

Produced with lots of love by Guillermo del Toro, this Spanish horror film frequently makes appearances on decade best-of lists. As far as unconventional gothic narratives go, this one’s in top form. All the hallmarks are here—remote location, creepy mansion, creepy kids in an isolated boarding school, the presence of the sea for an extra-brooding atmosphere—but it’s the character-driven story and unusual conclusion that makes this one especially memorable.

Based on Peter Straub’s beloved horror novel by the same name, Ghost Story stars Fred Astaire—yes, Fred Astaire—and a host of other golden-age actors as old men trying to root out a generational evil from their tiny New England town. This film and its novel predecessor had a huge influence on Stephen King, who later collaborated with Straub, and a generation of writers in the ’80s.

No list of classic gothic films would be complete without a few works by the Italian masters of Giallo horror, and as Eli Roth discusses in this Trailer From Hell segment, Pupi Avati’s House of Laughing Windows is one of the best. Substitute “group of evil church rectors” for “group of evil ballet teachers” and “Christianity” for “occultism,” and you have the rural, artistic inverse of Suspiria, whacked out and irresistible.