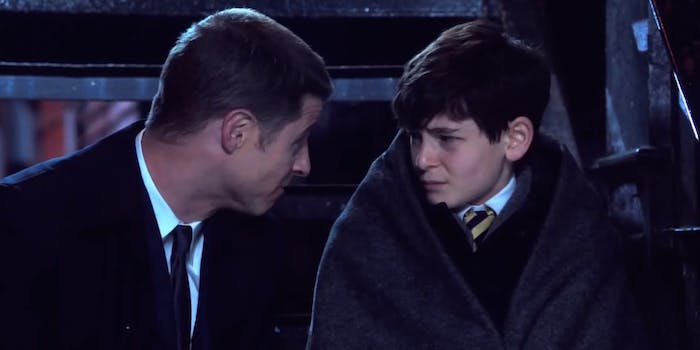 Batman returns to TV with the Comic-Con premiere of ‘Gotham’

The show begins rather predictably with the murder of Bruce Wayne’s parents, but it’s a refreshing spin on the classic story.

Those lucky enough to get into Hall H at San Diego Comic-Con Saturday night were treated to the world premiere of the new Batman origin story TV series Gotham, as part of the first-ever nighttime WBTV/DC Entertainment event. The highly anticipated new series played to a seemingly full room, after an airing of a pilot for The Flash.

While the tone of Gotham was quite different from its fellow freshman series, reactions from the crowd were overwhelmingly positive to the new take on the Dark Knight’s home. The show begins rather predictably with the murder of Bruce Wayne’s parents, but from then on it’s a refreshing spin on the classic story.

Viewers meet a young Jim Gordon and what follows is a unique mix of police procedural drama with hero and villain origins. As soon as the audience was caught up in Gordon’s investigation of the murders and navigating a corrupt police department, a familiar face would enter the scene and the crowd would cheer as they connected the dots to who these people would later become in Gotham. Even new characters like the enchanting Fish Mooney, played by Jada Pinkett Smith, were portrayed so well you couldn’t help but feel like they have always been a part of Gotham.

While the recent Batman films took the characters through a darker world, Gotham somehow manages to make the city feel grim while also making the tone somewhat fun and light. It manages to balance the dark world of Gotham by matching the seriousness of the situation with a sense of humor and hope. What helped the most was perhaps Ben McKenzie’s portrayal of Gordon as the only good and honest cop left in the city. The crowd literally cheered every time Gordon made the right decision instead of just agreeing to go along with the corruption. No doubt his moral compass will be tested as the series progresses.

The room started to empty once it was over, but the show wasn’t forgotten. Fans continued to share their thoughts on the screening via social media through the night.

Just gushed about the new and amazing show Gotham to some people from Fox! #FOXSDCC #Gotham

#Gotham premier at Comic Com…Totally Awesome!!! Visuals are stunning and the story incredible!!!

WBTV and DC can certainly call the world premiere a success. Now viewers just have to wait and see if the rest of the episodes follow this refreshing model.