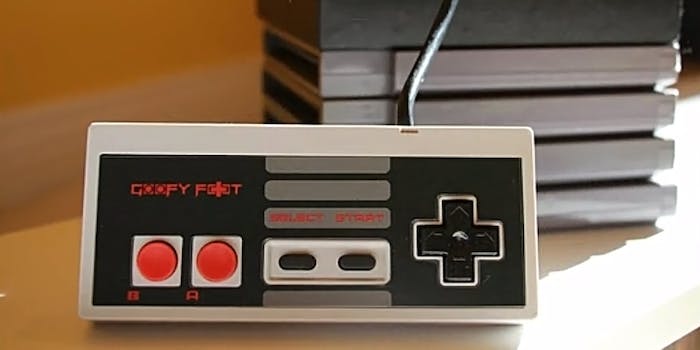 It's like the classic controller you already know—with one big change.

While game controllers have changed drastically over the years from system to system, the basic construction has stayed the same: arrows on the left, action buttons on the right. But one Kickstarter is aiming to make a game system’s controller more usable for the players who never felt quite at home with the classic setup.

Goofy Foot, which takes its name from a boardsport stance where the rider leads with the right foot instead of the left, recreates the iconic Nintendo Entertainment System game controller with one notable change. The arrows and buttons on the controller are now on opposite sides, making it easier to use for some left-handed gamers. Created by Steve DeLuca, he got the idea of making a mirrored NES controller after attending a Classic Tetris tournament and soon found himself with other requests, although his original design just rewired the NES controller so that the cord came out of the bottom of the controller.

It doesn’t take much to rework an existing controller, but DeLuca wanted to make a proper version, and raising the funds means more can be produced. The current version of Goofy Foot is compatible with the NES, Hyperkin’s Retron line, retroUSB’s AVS, and other NES clones.

With 27 days to go Goofy Foot has raised more than $1,700 of his $12,000 goal, and given the revived interest in NES after the release of the NES Classic Mini some gamers might be booting up their old systems again while they wait for the new one.