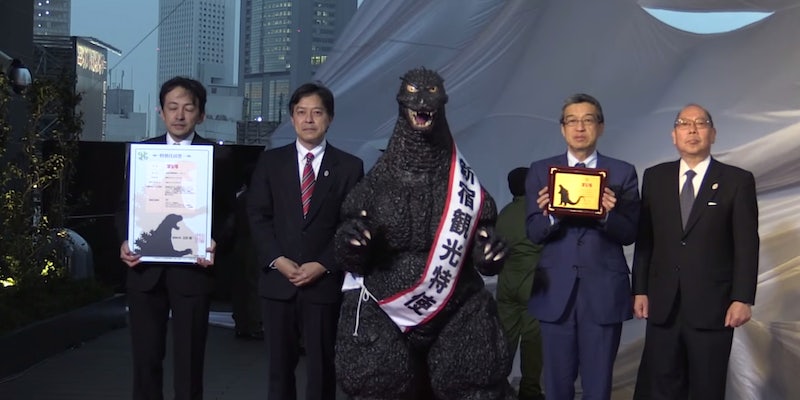 Japan finally recognizes Godzilla as a resident and tourism ambassador

Now if only Japan would stop threatening to deport Mothra.

We all know that Godzilla is the mighty monster upon which six decades of kaiju entertainment has been based, but what has he ever gotten for his pains? Endless insurance claims, felony charges of terrorism for destroying major sections of Tokyo, and most likely considerable difficulty finding a job outside the odd monster eviction.

But all of that’s finally changing thanks to a new decree from the Tokyo ward of Shinjuku making Godzilla an official resident of Japan.

The move comes after the King of Monsters, or at least his head, ascended to the top of the Toho cinema complex in a special ceremony naming him a tourism ambassador to the area:

There’s no word on whether the role of tourism ambassador pays Godzilla a living wage, but hopefully it’s enough to allow him to get his feet under him—without crushing anyone in the process, that is.

In gratitude for ‘Zilla’s contribution to Japanese society, Shinjuku Prefecture awarded him this cool new plaque of appreciation: 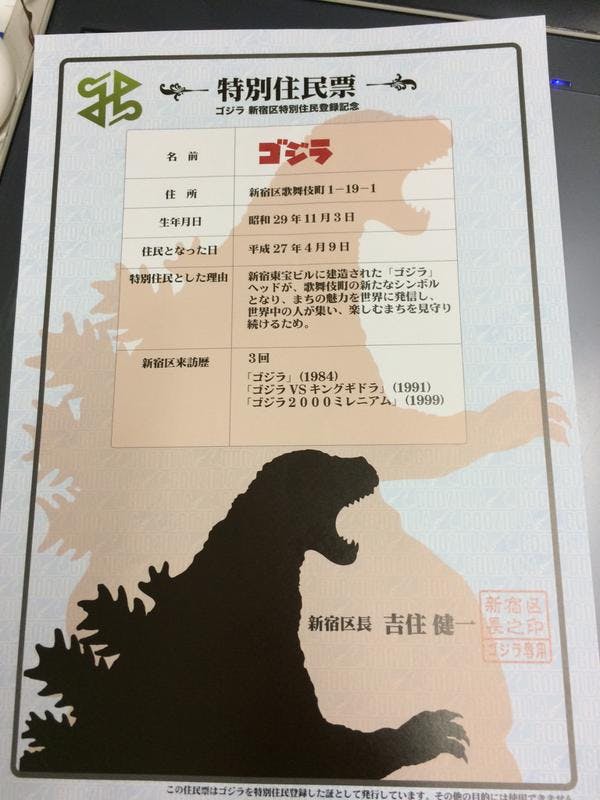 According to Anime News Network, the plaque reads:

Date of birth: April 9, 1954 (the year of the release of the very first Godzilla film)

Reason for special residency: Promoting the entertainment of and watching over the Kabuki-cho neighborhood and drawing visitors from around the globe in the form of the Godzilla head built atop the Shinjuku TOHO Building.

Although the official ceremony took place in April, Shinjuku just recently made certificate copies of Godzilla’s plaque available to the first 3,000 Japanese fans who request proof of his residency status.

Meanwhile, on the studio side of Toho Co., creators including Neon Genesis Evangelion‘s Hideaki Anno are hard at work producing the latest addition to the Godzilla franchise. Hopefully, they’ll hire Godzilla himself as a consultant, if he can tear himself away from telling confused tourists outside Shinjuku Station how to get to Shibuya.

Now if only Japan would stop threatening to deport Mothra.