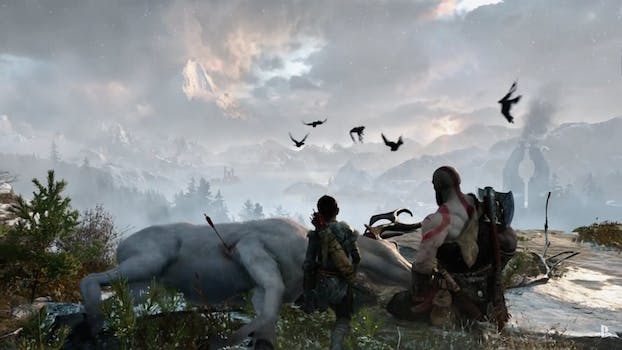 Kratos brings years of emotional baggage and violence to the Norse realm of Midgard.

Kratos, God of War’s titular star, has been seen as a monster, a god, and most of all, a man. The ash-covered, brawny protagonist we’ve followed for 13 years moved in a familiar way, spoke like one of us, and boiled with a feral rage so indistinguishably human. But the newest installment wants you to believe this couldn’t be farther from the truth. It wants you to believe something entirely new about the character.

That Kratos was a machine.

Set on a singular purpose, he cut down his foes with efficiency that could only be driven by design. God of War has been held as a high point of the character action genre, thanks to the bloody combat mechanics of its muscular leading man. But there are no combo counters or score bonuses for dismemberment to be found in this new installment.

Now a relic of a bygone era, the latest God of War finds Kratos trying to live a new life. Rather than the bombastic, bloody openings often attributed to the franchise, the eighth entry introduces a solemn Kratos alone in the woods. He’s still the same hyper-masculine demigod, now aged, bearded, and more soft-spoken. Though the game opens on an intimate moment, implying that everything has changed, it pulls no punches quickly illustrating that its trademark violence will come.

My first victim was a tree. The lumber-chopping opening is meant to acclimate players with Kratos’ new axe, but also introduces a shift in tone. Meeting the Ghost of Sparta again, he’s alone by a cabin in the woods, preparing to say his final goodbyes to the mother of his child. PS4’s God of War picks up far away in space and time from the rest of the franchise and just asks you to go along with it.

Transitioning from Greek to Norse mythology could have been disastrous, considering Kratos’ deeply personal reasons for destroying the pantheon of Mount Olympus. Thankfully, God of War aims to be much more than a violent tour of Asgard. Players’ main objective is to honor the last wish of a dying woman, to reach the realm of Midgard’s highest mountain summit and spread her ashes. With his innocent son Atreus, Kratos sets out on his journey in a remarkably well-paced story packed with genuinely surprising moments.

One of my favorite encounters involved a man who comes knocking shortly after the sober opening. Rambling and ranting, the stranger challenges Kratos without knowing anything about his neighbor’s true nature. Where I expected the game to take the opportunity to show off Kratos’ sheer strength at the expense of this generic story beat, the sequence turned into one of the series’ most impressive enemy encounters.

God of War has always showcased absurdly large creatures and intense, fast-paced boss battles, and this entry preserves the ludicrous scale of everything presented. Every single cutscene feels as if a quick-time event or combat could cut in at any moment. Brilliantly rendered character faces and evocative voice acting drive the emotional narrative, but the game’s overall direction is the real star.

Put simply, this is one of the most cinematic games I’ve ever played. The camera blends seamlessly between cutscenes and gameplay, often so well that I didn’t realize when control had been taken away or given back to me. I saw loading screens only upon death. Several scenes track from combat to a conversation and back to exploration without changing the angle or perspective. This “single shot” style of presentation lends a dramatic tension that perfectly compliments the nuanced, more mature side of Kratos the game aims to portray.

From the moment this soft reboot was introduced in 2016, comparisons to The Last of Us were unavoidable. You travel an unknown land full of dangers with a young companion, teaching them lessons about the world and reflecting on the nature of violence. But, like that story, God of War is so strong because it really belongs to Atreus, framing the main protagonist as an abhorrent, ugly character.

Kratos is a bad father. Atreus’ introduction could have taken a different direction, full of trite cliches and blatant attempts to pull on the player’s heartstrings. Thankfully, this game wastes no time in making the dynamic between Kratos and his son a compelling back-and-forth with real layers. Rather than attempt to absolve the former of any wrongdoing because he cares for his boy, God of War gives both characters plenty of room to grow.

It starts early with a hunting lesson, where Atreus is eager to impress Kratos but can’t quite commit to finishing off a deer he managed to incapacitate. The demigod silently steps in and digs his knife into the writhing animal’s neck, demonstrating the hard reality of their journey as well as his natural thirst for blood.

Through Atreus’ eyes, we see a new side of God of War. The first act of killing in the game is viewed through a lens of hesitation and regret, as if to ask the player if they are ready for the 30 hours of violence to follow. It’s an interesting narrative thread to watch the young boy come to grips with the nature of his heritage, but the game is quick to lose some of the commentary on over-the-top violence. Contending with the fact that your son is traumatized by killing one animal is tough to stomach while also chasing after a combat upgrade that requires you to cut down over a hundred enemies.

Switching to Kratos’ bare fists to pummel an unarmed minion while my axe was holding a tougher enemy in place felt empowering, as was the simple manner in which I could command Atreus to launch off a blast of arrows to stun stragglers. Each new area brings in diverse additions to the bestiary, making those encounters actually exciting and tense.

Whenever my plan of attack was starting to feel mindless or repetitive, the combat system introduced some new mechanic. Whether it was an enhancement to my axe’s range, a new piece of equipment for Atreus, or an enemy resistance to account for, there was always something forcing me to get creative with how I was playing. There is a skill tree and light RPG elements at work with customizable armor, but nothing too overwhelming to choose from. Carefully exploring for chests and hidden treasures grants enough currency and points to fully upgrade everything you’d want to benefit from.

While the main story pushes forward with good momentum, there are plenty of side stories to keep you entertained, including the rivalry between a foul-mouthed dwarf and his germaphobic brother. Likewise, there are plenty of smaller quests and favors to take care of during travel that open up new challenges and net some impressive rewards.

If anything about this God of War is frustrating, it would be the reliance on distracting puzzle rooms and played out backtracking. The fast travel system is needlessly complicated, and while the world isn’t massive, it starts to get grating to be heading between the same destinations multiple times. Too often, Kratos and Atreus reach their goal only to be told that they need to retreat, find some new magical object, and return if they want to press on. These consistent diversions and distractions are particularly off-putting because of how compelling the main narrative is. Most of the Uncharted-inspired climbing and puzzle rooms feel like extra padding to bolster the game’s playtime, eventually undercutting the story’s urgency.

My time with God of War saw the credits roll after about 30 hours of gratuitous violence, plot twists, and authentically earned emotional resonance. I was spit back out into Midgard with a new checklist of challenges to track down after beating the game, and I wanted to rush off to chase them down. But I can’t help but feel that some of my enthusiasm was whittled down over time by the number of nonsensical gameplay sequences I had to endure. Fixing elevator lifts, scaling mountain peaks, and decoding Norse runes constantly kept me from the thrilling combat encounters and tantalizing story clues I wanted to see.

Still, I can’t wait to see where these characters go next. God of War ends on a promising, chilling tease that opens up the series for something wholly unexpected. Bringing Kratos back to think about the terrible things he’s done, and to ask if he can change, has ensured that future God of War games will be more interesting than they ever were before. While this game offers plenty of callbacks and references to the mythology of the past, it is better when boldly blazing a new direction for our heroes.

Opening with the promise of a changed Kratos certainly sets grand expectations for the new God of War. Under the game’s focused direction, the story manages to provide a thoughtful meditation on its hero’s legacy, the nature of his gratuitous violence, and what it means to engage in such senseless killing. And though it isn’t perfect, the game excels at nearly everything it sets out to do. Full of genuine surprises, thrilling action, and emotionally grounded in almost every moment, this God of War is easily the best entry in a long series that had no right to reinvent itself so well.

God of War will be available for PS4 on April 20.

Disclosure: This review was written based on a standard PS4 copy of the game provided by the publisher.