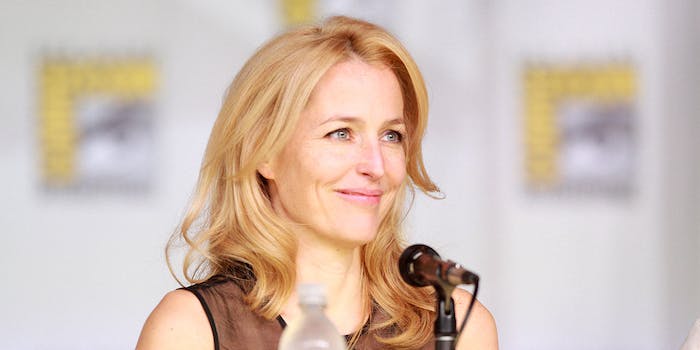 Gillian Anderson is leaving ‘The X-Files’

After 11 seasons, she's done with the show.

After this year’s 11th season, Gillian Anderson is leaving The X-Files.

“It’s time for me to hang up Scully’s hat. It just is,” Anderson said during a press event this week. “I’m finished, and that’s the end of that.”

With Scully out of the picture, that seems like a definitive end to the show. Whether the show ends or continues without Scully, David Duchovny said he’s “good either way,” but let’s be real here: What’s the point of The X-Files without that central partnership?

Anderson said that she was already planning to leave. “I arrived at the decision before we did the previous six [episodes], but I was really curious,” she said. “I felt that the previous six was going to be it. It was dipping our toe back in again… and getting to play these wonderful characters again.”

Anderson has appeared in over 200 episodes of The X-Files, and with two movies out this year and several high-profile TV roles in recent memory, you can see why she might want to move on. Last week she also confirmed that she was quitting her role as Media on American Gods, leaving her schedule open for new projects.