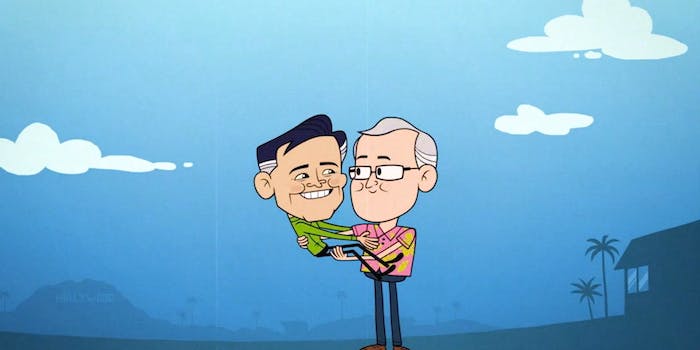 This 'reality' series will offer a glimpse inside the lives of the Takeis.

Star Trek actor and social-media star George Takei has debuted a teaser trailer for his brand-new webseries “It Takeis Two,” starring Takei and his husband Brad.

“In this ‘reality’-series, actor and activist George Takei (Star Trek’s Sulu) and husband Brad Takei navigate their daily lives, from the Internet and Broadway to jetpacks and human hamster balls,” the series’ YouTube description reads. “With a recipe that is one part optimism and one part pragmatism, this dynamic duo overcomes life’s obstacles, reminding us that any great enterprise Takeis Two.”

The fun teaser offers a look at the first episode, titled “Seriously?!”, as well as the adorable animated title sequence that pays homage to Bewitched.

“After the release of To Be Takei, fans clamored for more from Brad and me,” Takei told Entertainment Weekly. “The web series It Takeis Two gives Brad a place in the spotlight and a platform on which to complain. That alone makes it worth it to me. So while we won’t be taking fans into ‘outer space’, we will be ‘spacing out’ our lives for the fans through these webisodes. We hope many fans tune in regularly.”

Episodes of It Takeis Two will be released on Takei’s YouTube channel. The show is set to premiere April 7.