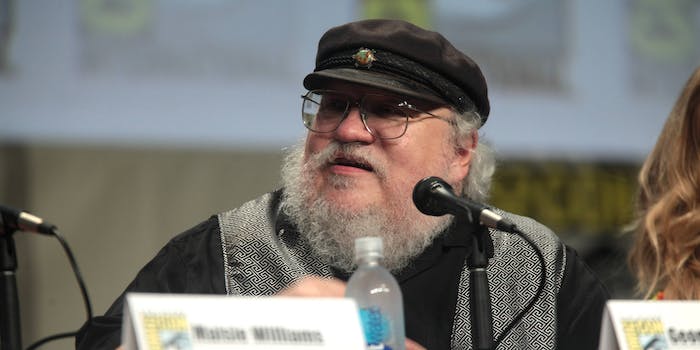 George R.R. Martin reacts to his publisher’s comments on ‘The Winds of Winter’

There's a reason why 'The Winds of Winter' isn't on HarperCollins' publication schedule.

Last week, Game of Thrones and A Song of Ice and Fire fans erupted after George R.R. Martin’s U.K. publisher Jane Johnson confirmed that The Winds of Winter wasn’t on HarperCollins’ publishing schedule for 2015. Martin has finally responded, demonstrating that the world of book publishing is more complicated than it seems.

Speculation about when TWOW would be released started a few weeks ago, after fans began asking Johnson about the book’s progress. It’s been close to four years since the last book was released, and with a new year came new questions. After all, Martin turned down his option to write one episode of Game of Thrones in the upcoming fifth season in order “to finish the book The Winds of Winter.”

This was Johnson’s initial response to the flurry of questions.

@bonefish914 It's not in our 2015 publishing schedule as it stands – I know no more than that at the moment.

Johnson then spoke to The Guardian and explained that TWOW wasn’t on the 2015 schedule and that she had no information on when the book would be finished.

Martin has largely ignored the news for the past week, instead using his LiveJournal to promote the new HBO trailer, alert fans to the newest chapter of Telltale’s Game of Thrones, and express excitement over Milla Jovovich’s casting in the movie version of one of his short stories.

However, after making a post on how his movie theater in Santa Fe will host screenings of Game of Thrones season 4 episodes leading up to the season 5 premiere, one commenter asked him about the reports of TWOW‘s delay.

Martin’s response to the commenter is both frank and to the point. It demonstrates both his frustration with the current state of publishing and his desire not to hype up the fans more than they already are. Publishers set up schedules for when books will come out far ahead of time, but things can change—leading to books potentially coming out sooner than planned or later than people had hoped.

“I certainly hope that THE WINDS OF WINTER is not on the schedule of ANY of my publishers,” Martin wrote. “I have spent years trying to persuade them all not to schedule my books until they are completed and delivered. Scheduling, and then having to reschedule and postpone, just pisses people off. I’d rather not schedule at all until the date is real and certain.”

While TWOW isn’t currently on any publishing schedules for 2015, that doesn’t rule out a 2015 publication date. As Martin has said before, we’ll find out the release date for the sixth ASOIAF book from him—and not a moment sooner. Eager book fans, take your watch.