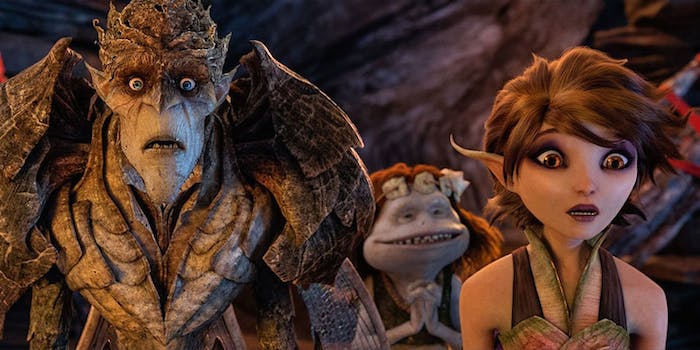 When you think of who might be behind the story of an upcoming animated fairy tale musical, you’d probably guess just about anyone but George Lucas. But in the case of Strange Magic, you’d be wrong.

Strange Magic, a film set for release early next year from Lucasfilm and Touchstone Pictures, has a story by Lucas. The synopsis describes the film as “a madcap fairy tale musical inspired by A Midsummer Night’s Dream. Popular songs from the past six decades help tell the tale of a colorful cast of goblins, elves, fairies and imps, and their hilarious misadventures sparked by the battle over a powerful potion. Lucasfilm Animation Singapore and Industrial Light & Magic, which created the CGI animation for 2011’s Academy Award-winning film Rango, bring to life the fanciful forest turned upside down with world-class animation and visual effects.”

Lucas will also executive produce and will be joined by director Gary Rydstrom, who also wrote the screenplay with David Berenbaum and Irene Mecchi. According to Hero Complex, before Strange Magic was revealed, rumors swirled that what was in the works was actually a Frozen sequel, but instead this musical was announced.

Fans took to Twitter to share their thoughts on the interesting venture, mostly commenting on Lucas’ involvement.

im so ready for the new george lucas’ new movie strange magic. like, so ready. ✨

Pretty excited about a new animated film from George Lucas.

Is strange magic technically disney since it’s Lucas? I do not like the look of it at all …. Too epic-y. And epic was terrible.

We won’t have long to wait to see what comes of this Lucas story as Strange Magic is scheduled to be released on Jan. 23, 2015.