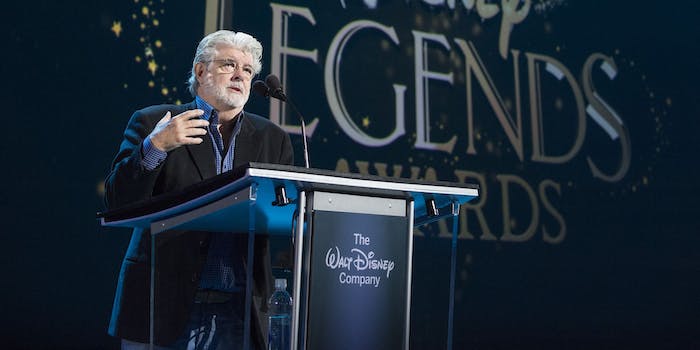 Gawrsh, the Force is strong with this one.

The union of Disney and Star Wars may have brought balance to the Force, but one of them may have influenced the other years before the two came together if you take George Lucas at his word.

Lucas was honored with a Disney Legends Award at the D23 Expo over the weekend after being escorted onstage by R2-D2 and C-3PO. In his acceptance speech he revealed the major Disney character who ended up influencing one of the most polarizing characters in the Star Wars universe. Yes, it’s the very one you’ve imagined.

“I can’t even begin to tell you how much of an influence Disney has had on me,” Lucas said. “I will say one secret that nobody knows: Not many people realize that Goofy was the inspiration for Jar Jar Binks. I know that you will look at him differently now. It’s pretty obvious, actually, but, um, I love Goofy and I love Jar Jar.”

Goofy might’ve influenced Jar Jar Binks (or not, if you take the belief that Lucas is trolling his fans), but Disney already has its own Star Wars canon—which isn’t part of official Star Wars canon—that instead casts him as Darth Vader.

This one is pretty much a given, considering that Mickey has already attempted magic as the Sorcerer’s Apprentice in Fantasia. It only makes sense that the Force is strong with him as well—and if anybody can stop the Galactic Empire it’s him.

Who else would be able to be a diplomat, help plan the destruction of the Death Star, not be intimidated by threats from Darth Vader, and put down both Luke and Han Solo when they’re acting like complete idiots? (Mickey and Minnie’s real-life romance could also fuel the accidental incestual relationship from The Empire Strikes Back.)

Mickey and Donald often clash when it comes to leadership, but at the end of the day they’ll do whatever they need to in order to get the job done. Occasionally his hotheadedness will get in the way—particularly with Minnie.

Goofy is a trusting fellow, so we can’t really blame him for being tricked into turning to the dark side by the Emperor when he was younger. Expect some “Gawrshes” to get in the way of his dialogue.

He’s got plenty of spunk and personality but most of us can’t understand a word or sound he’s making. But you still better let him win at Dejarik.

No one alive knows more about magic and the Force (besides Yoda) than Yen Sid, making him the perfect fit to teach the Chosen One the ways of the Force. He’s wise and powerful, but he’d also know when to stand down.

He’s big, he’s bad, but Pete would also be able to play the cunning politician who managed to convince one of the most powerful Jedi knights to turn against everything he’s known for most of his life. At least until his temper gets in the way.

We never see Boba Fett’s face during the original Star Wars trilogy, so who’s to say that the character has to be played by a male? Injecting some much-needed lady presence in Star Wars, Daisy is not one to be messed with. Who else could take down Donald as Han Solo?

9) Scrooge McDuck as Jabba the Hutt

Scrooge McDuck knows exactly where his money is and where it’s going at all times. We can only imagine how he’d react if one of his smugglers dumped his load at the first sign of the Galactic Empire and lost him thousands—even if it is his own nephew.