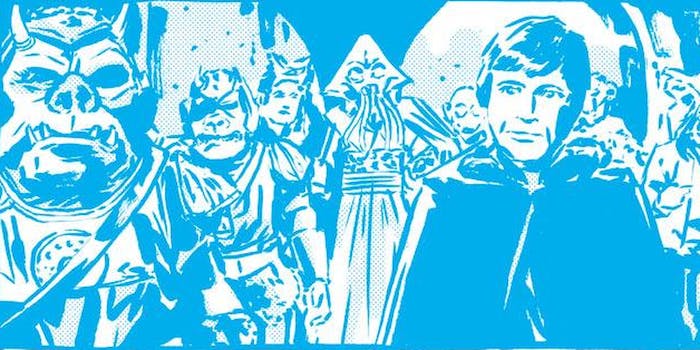 The dog days may be over, but the #darthdays are just beginning.

George Folz is starting off the year with what may be the best resolution ever: He’s drawing a Star Wars comic for every in 2015.

Folz is a comics artist who collaborated with noted writer Seth Kushner on last year’s critically acclaimed, Kickstarter-backed Schmuck. While working with Kushner on a new project called The Roman Nose, Folz found himself rekindling an old love for Star Wars.

To celebrate, and help keep his artistic skills from stagnating, Folz decided to create a daily regimen—of fanart. On his Tumblr, he wrote:

Having re-discovered my love of Star Wars, and in anticipation of Episode VII, for every day in 2015, I’m going to sit down and translate a scene from episodes IV, V, and VI into a stand-alone comic panel in 90 minutes or less.

I’m treating this as my warm-up exercise for the year— a way for me to have fun, and do something on a daily basis that is completely removed stylistically from The Roman Nose.

As part of the year-long celebration, Folz is also doing giveaways of many of his black-and-white drawings once a week. Interested fans can message him on Twitter, Tumblr, or Instagram to receive their own personal copy of a sketch he’s done.

The project has already attracted fan and media attention, with Folz gaining a steady trickle of new followers on Twitter and Tumblr.

And it’s easy to see why. With the force (re)-awakening in Star Wars fans the world over, it’s a good time to be a fan. And it’s clear the nostalgia is strong with this one, since Folz has said he’s only going to be homaging the original Star Wars trilogy.

That means we can hopefully look forward to an entire year’s worth of beloved scenes made new again: 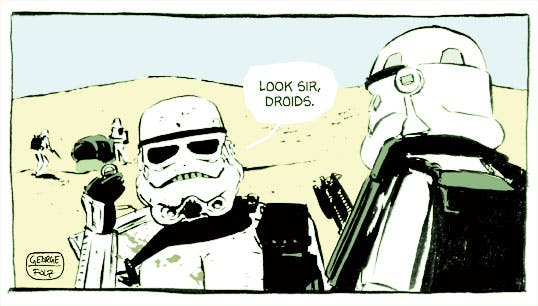 Though the drawings are small, Folz has still undertaken a huge challenge.

But at least he knows the Force will be with him.