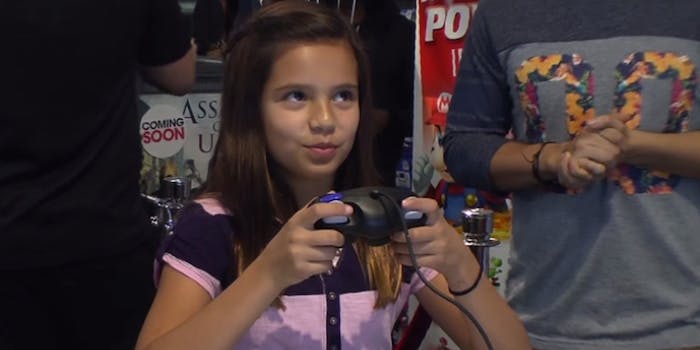 With better execution by GameStop, this stunt could have been a success.

On Nov. 9, we reported on Karissa Bannister, a.k.a. Karissa the Destroyer, a 10-year-old girl who wrecked shop at a local Smash Bros. for Wii U tournament at a West Hollywood GameStop. She even managed to take down some professional players while trash-talking them into submission.

It seemed like GameStop had the makings of a truly viral video: interesting premise, video game personalities tweeting the event like wildfire, and one of the best players in the world.

When such an insane event takes place, people film it and post it on the Internet. Last week, before GameStop released this video, eagle-eyed viewers noticed inconsistencies between Bannister’s finger movements and what was happening on screen. Some started calling the event a hoax. More evidence came to light, showing that the girl was an aspiring actress and that GameStop put out a casting call for for a young girl to simulate playing a game.

The person actually playing for Bannister was none other than Daniel “KDJ” Jung, a professional Smasher from Team Liquid. Users on /r/smashbros have been discussing the hoax, and Jung himself linked to this rather appropriate video.

Though this ended up being a marketing stunt to further the GameStop brand, the fervor around the video seems to have calmed down now that the community knows Jung and Smash Bros. commentator D’Ron “D1” Maingrette were in on it.

With better execution, it would have been possible for GameStop to pull this off. Bannister’s fun, in-your-face, and knows her angles when taking photos. Depending on how you look at it, that’s kind of unbecoming of a professional-level Smash Bros. player. Someone playing at her level would have to spend a significant portion of her childhood honing her skills. Asking if your opponent is crying just screams ‘80s movie cliche.

On YouTube, the video has gained quite a few views. Right now it’s sitting at more than 660,000 with 2,500-plus likes and more than 600 dislikes, which we assume is something GameStop wasn’t hoping for. The YouTube comment section is much more hostile to GameStop than r/smashbros. It’s even a little too hostile for YouTube’s standards.

If this video came to light before it was debunked, would this conversation be completely different? Most likely.