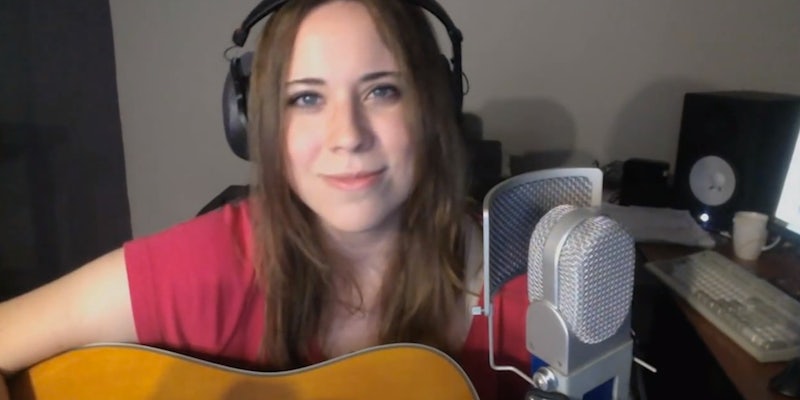 This gamer unites fans across the globe with her beautiful song covers.

Music is just as important to a video game as its graphics and storyline, and sometimes it’s so memorable that it inspires professional musicians to travel the world and unite fans with these sounds, as professional orchestras have done with The Legend of Zelda and Final Fantasy. But this inspiration doesn’t extend only to professionals, fans have also broadcast their own attempts via YouTube.

One fan in particular has made a name for herself thanks to her video game inspired music videos. The life of Judith de los Santos, also known as Malukah, changed forever when she posted a cover of “The Dragonborn Comes” from Bethesda’s The Elder Scrolls V: Skyrim on Nov. 29, 2011. The video went viral and was shared on numerous gaming websites including IGN, Kotaku, and The Escapist.

Two years later, that first video has more than 11 million views. Santos told the Daily Dot she was surprised by all the attention and scared at first.

“I’m very shy when it comes to sharing music, so when ‘The Dragonborn Comes’ went viral, I almost had a panic attack,” she says. “But, people have been wonderful and they’ve made me feel at ease and more confident. It’s still hard to believe that any of this has happened.”

A gamer since childhood, Santos has always loved consoles like the classic NES and Super Nintendo. Her other love? Music. She started writing songs and singing as early as 15. She first combined her interests when a group of friends who started an indie game company in Monterrey, Mexico invited her to compose music for some of their mobile games—an experience she found transformative. For her, games were a more dynamic medium than the films and songs she’d worked on before.

As a freelance composer and musician Santos works on various projects but, continues to share her love of video game music by posting videos on YouTube that earn her millions of views. Santos said she chooses songs based on her emotional response to a game.

“Sometimes, there are songs that follow me as they are. When I find myself singing them over and over, I know that I want to try to cover them; like the Skyrim bard songs and soundtrack. I don’t think I could ever get tired of those melodies, and I love trying to weave several of them together into each cover,” she says.

The process isn’t a terribly complex one, though her attention to details is evident in the results. Once she’s chosen a song, Santos first works out the guitar and vocal arrangements. Santos says she tries to keep it simple so she can play it without struggling too much and then records a demo. After that, she experiments with background vocals and other instruments she can possibly include.

“I try to get an overall sense of the arc I would like the cover to have. Start softly, build, drop, build again. A sense of structure,” she says. “I pick the ideas I like the most in this demo and then start recording the final one. I love getting the guitar and main vocals done in one take—on video—if possible. This can sometimes take a very long time, to be honest.”

Santos says it can take up to eight attempts to get it right depending on the difficulty. Eventually, though, she gets to the fun: Recording all the other vocals, and creating the video. Each additional set of vocals is shown on Santos’ videos in a smaller box, so you can see her sing and play every part of the song—making her hard work even more obvious.

Santos sometimes accepts requests from fans, who unwittingly challenge her to take on projects she might not otherwise. For example, her most recent cover: “Leliana’s Song” from Bioware’s Dragon Age: Origins. Originally she thought the song would be too difficult to sing but as the suggestions and requests for it poured in, Santo’s was encouraged to try.

Part of the difficulty with this cover is that the lyrics are in the fake Elven language used in the Dragon Age world—though this isn’t the first time she’s sang in a game-created tongue. Some of the “The Dragonborn Comes” is in Skyrim’s language of dragons. Santos admits it takes extra time to sing these songs as she listens to them repeatedly to nail the pronunciations, but she thrills to his particular challenge… and clearly, rises to the occasion.

“I even write down the lyrics in a way I can read them easily, in a mixture of Spanish and English syllables. This helps me memorize them quicker. It’s fun trying,” Santos says. “Someday, I would love to work with someone who speaks a language well (whether made up, or foreign to me) that can teach me directly and accurately!”

She’s also ventured outside of covers, composing her own original music and lyrics based on video games. She said the inspiration for these tribute songs often starts while she’s playing a game. One of her most popular original songs, “Reignite,” was inspired by the release of Mass Effect 3 last year and has over 2 million views. Her second most popular tribute song with over 1 million views is for Halo 4.

“As I was playing Mass Effect 3, the experience was so intense that I knew I wanted to try to find the words to describe it. Not just the third game, but a way to summarize my appreciation for the entire series. With ‘Frozen Sleep’ for Halo, I was moved by the thought of Cortana sitting on a ship deteriorating for years and years between Halo 3 and 4,” she says.

Her songs have received attention from the developers behind the games. Santos was invited to perform “Frozen Sleep” at Microsoft’s Halo 4 Global Championship during this year’s video game convention PAX Prime in Seattle, and Bioware shared “Reignite” as well as her cover of “Leliana’s Song” on their Twitter and Facebook profiles. Companies have also asked her to sing professionally for them: she provided vocals for two songs each on a different DLC (downloadable content) for Activision’s Call of Duty: Black Ops 2 and was asked by Zenimax Online Studios to write a song based on the story of their massively multiplayer game The Elder Scrolls Online, which will be released in 2014. They asked her to perform the song at a live event at South by Southwest in March.

“I love knowing there’s a possibility that the people who inspired you to make something may get to see it. And if they do, and they support it, it’s a rush of encouragement! I can’t thank them enough for the support they’ve shown. I never dreamed of it!” Santos says. 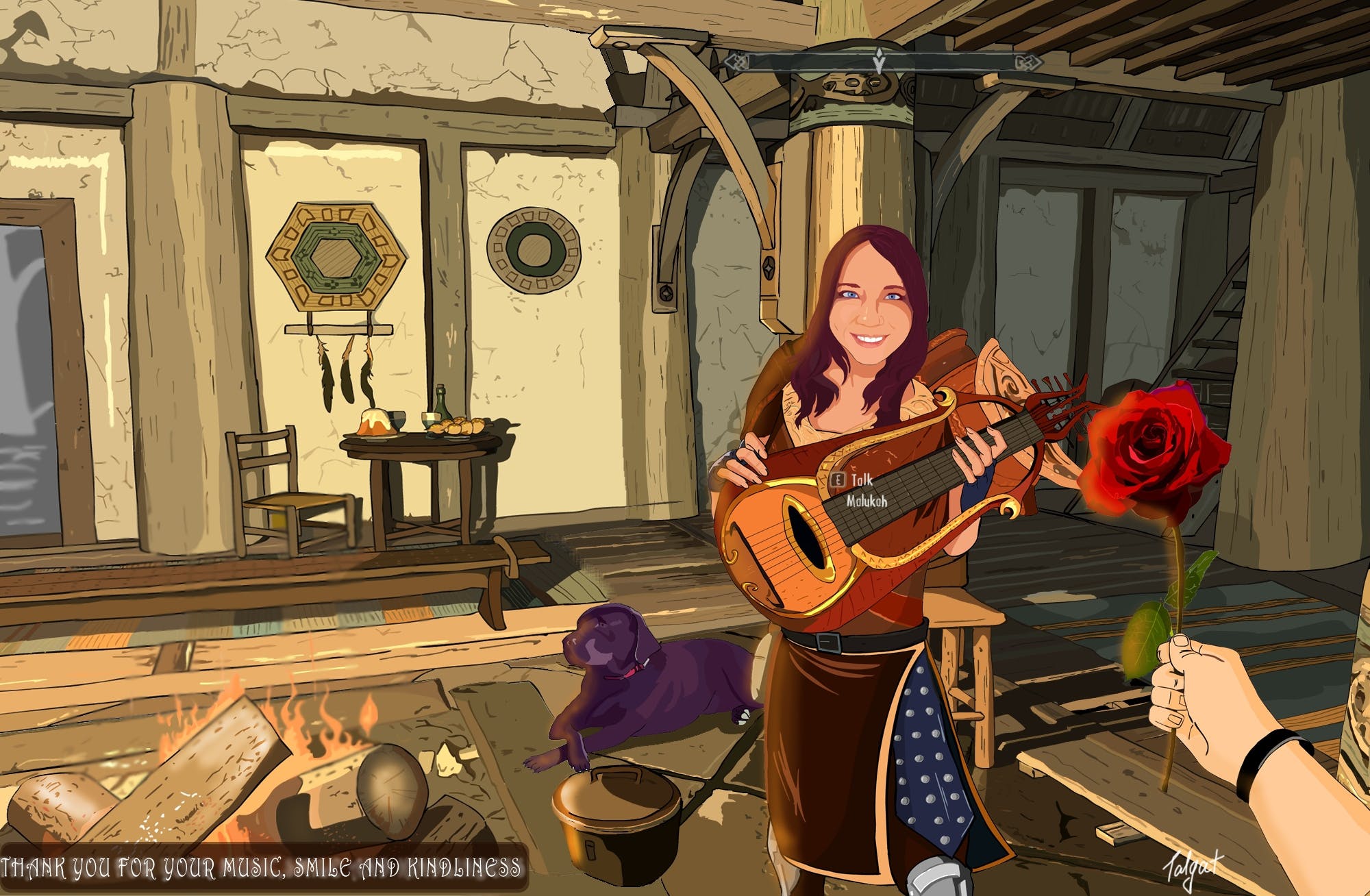 She has plenty of fans outside of developers, too. Her beautiful renditions have earned her YouTube channel over 270,000 subscribers and she has over 127,000 likes on Facebook. Some of her most dedicated followers send her fan art illustrating Santos herself in the worlds of the games she lends her songs to. They’re a visable reminder for how poignantly she’s touched fellow video game fans around the world with her music.

“The art that some people have made makes me feel very happy and fortunate to have been able to meet them even though we often live in different countries,” she said. “Music and games bring us all together.”