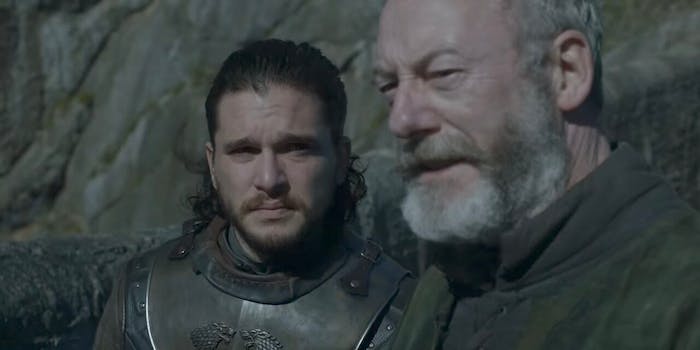 Although it’s the Summer Solstice in our world, HBO marked the occasion by releasing the latest trailer for Game of Thrones, where it is very much winter in Westeros. And for just about every character still alive, it’s a terrible thing to behold.

While the first trailer introduced us to the puzzle pieces of season 7, this one is shaped around a monologue from Littlefinger and “Light of the Seven,” the haunting piece from composer Ramin Djawadi. It’s the same soundtrack that set up and saw through Cersei Lannister’s coup to take the throne in King’s Landing. Daenerys Targaryen removes the banners flown by Stannis Baratheon at Dragonstone, Jon Snow is heard proposing an alliance to fight a bigger enemy while we catch glimpses of just where the war will take them, and Cersei is locked away in King’s Landing.

Old characters—and their notorious weapons—are back, while others have made big moves. We’re shown even more of the battles that will take place on land by armies fighting each other and White Walkers, in the air with Daenerys’ dragons, and by sea from Euron Greyjoy. As much as Jon and others try to unite, it won’t work out for everyone. That note strikes even more poignantly with an ominous callback to something Arya Stark remembered her father Ned saying to her in A Song of Ice and Fire, repeated here by Sansa Stark.

“When the snows fall and the white winds blow, the lone wolf dies but the pack survives,” Sansa said as one rider in the far north is seen