All men must use coasters.

Looking for a fun DIY project over the holidays? Take a page out of these Game of Thrones fans’ book—their very thick, George R.R. Martin-sized book.

Redditors spikesplayfood and erinnnnx are a couple who wanted to inject some Game of Thrones love into their living room. So the two fans built an impressive coffee table using refurbished wood, a detailed map of Westeros, and a little ingenuity. 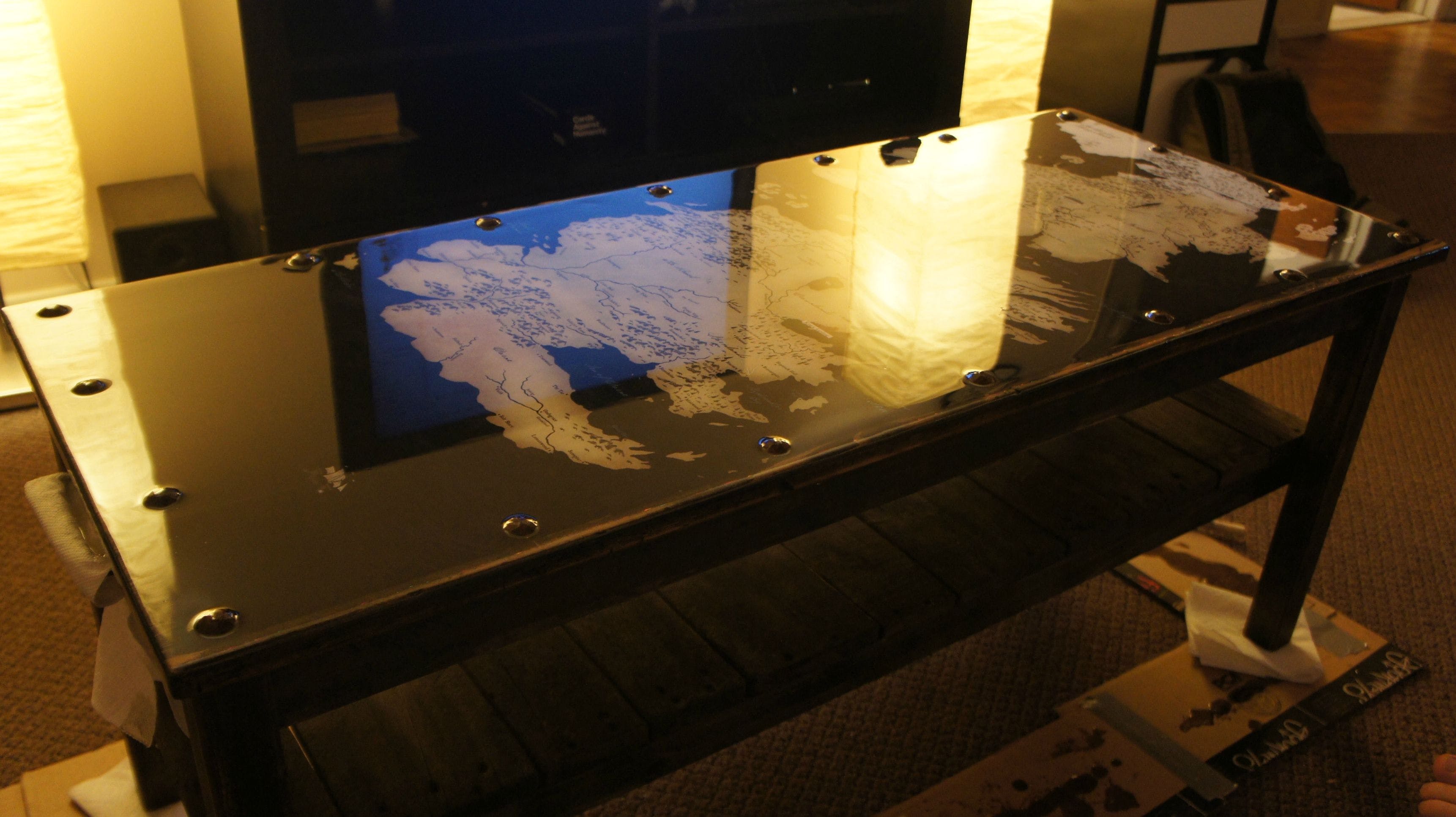 The best part? The completed table cost less than $200 to make.

The two shared all steps of their building process with Reddit’s r/gameofthrones community and with Imgur.

After deciding they’d rather have a Westeros map as their coffee table theme instead of a regular old-world map, the two looked for a high-resolution Westeros map online to use. It looks like this version is the map they ultimately chose.

From there, they assembled the coffee table using an old refurbished college-era table, and a wood pallet for the new shelf they added in. They created a wood stain finish by combining steel wool and vinegar. Then they threw in a few rustic elements like weathered nail heads: 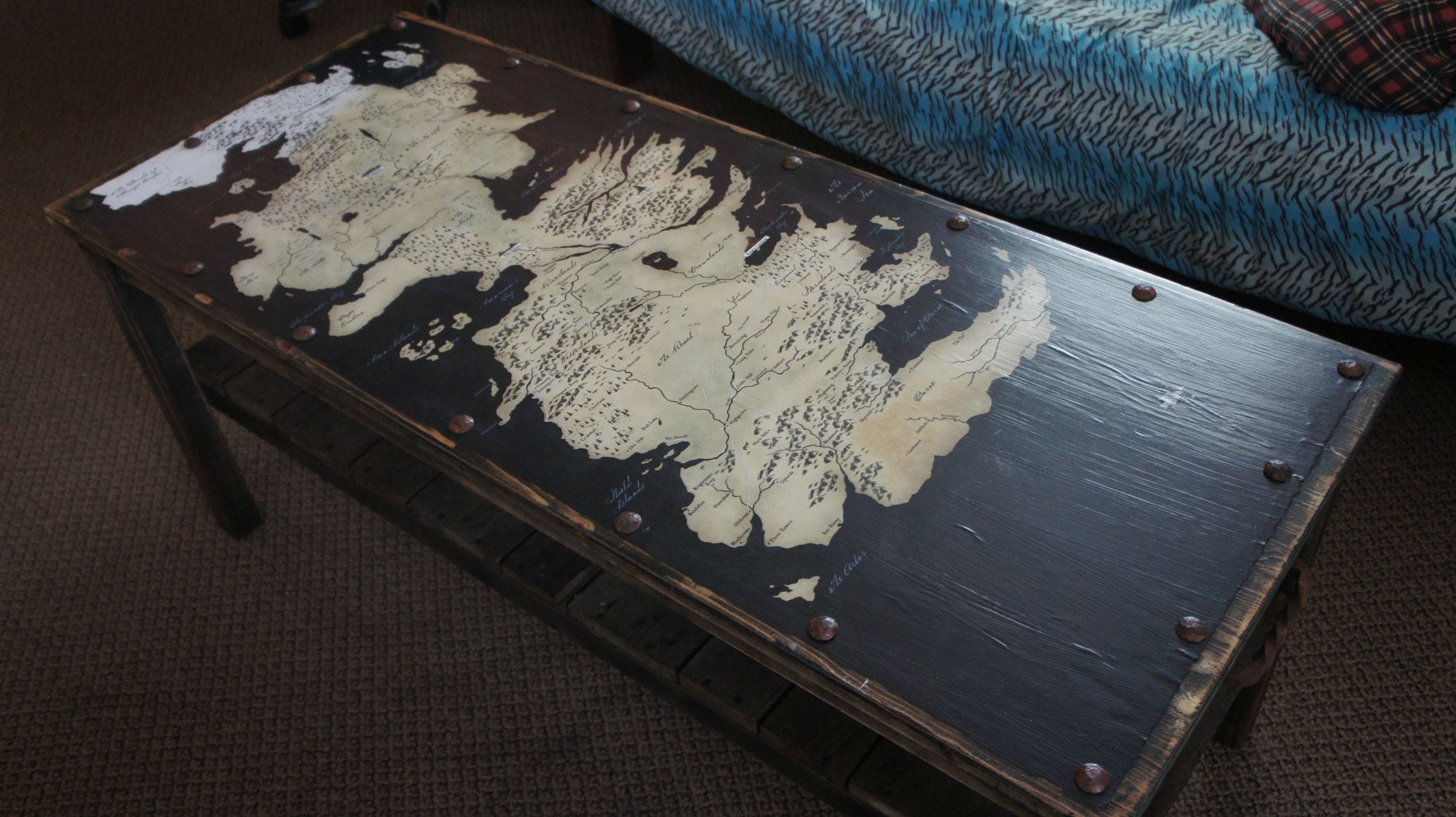 Spikesplayfood enumerated the supplies they used, including:

The rest, including the table, the wood pallet, and the Mod Podge they used for the glue/sealant finish came free, according to a comment from spikesplayfood.

He also elaborated about the process of creating the map:

I created a Photoshop canvas the size of the table (minus an inch on each side so the edge of the wood could show) and cropped the image just so that one continent would fit. I had to move a couple labels/names on the map so they wouldn’t be cut off, and took it to my local Kinkos to be printed on a plain/matte card stock. The first test print was terrible, the background was mostly black, it was just the way the ink set on the paper from their printer. To account for the way the printer read/printed color, I brightened the background a LOT and increased the saturation of the land just slightly. After about 4-5 test prints I was finally happy and got a full print out. The Modge Podge we used secured the poster to the table and made sure there were no air pockets that would affect the epoxy seal layer. We picked that up from Michaels (or any craft store really). 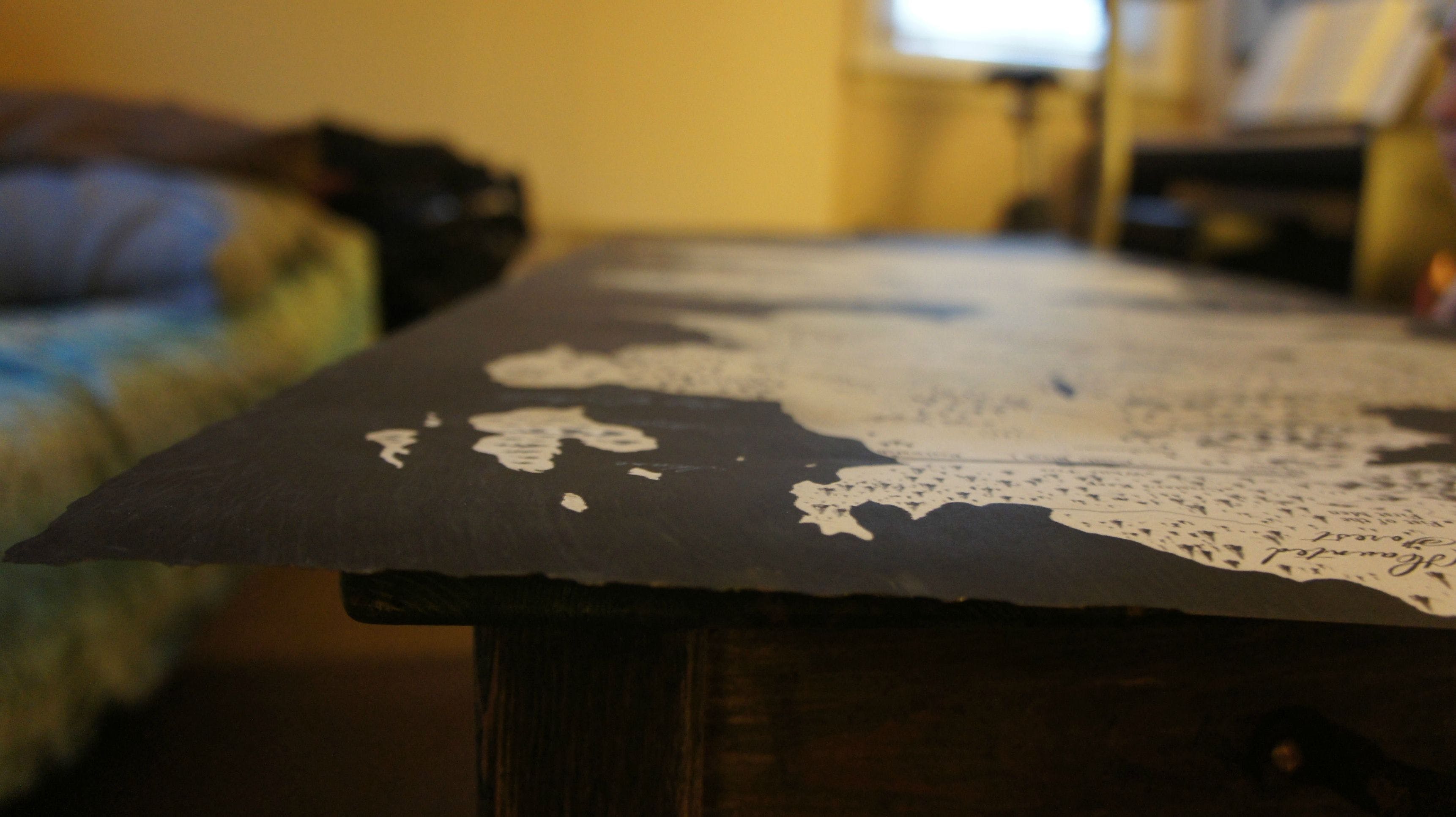 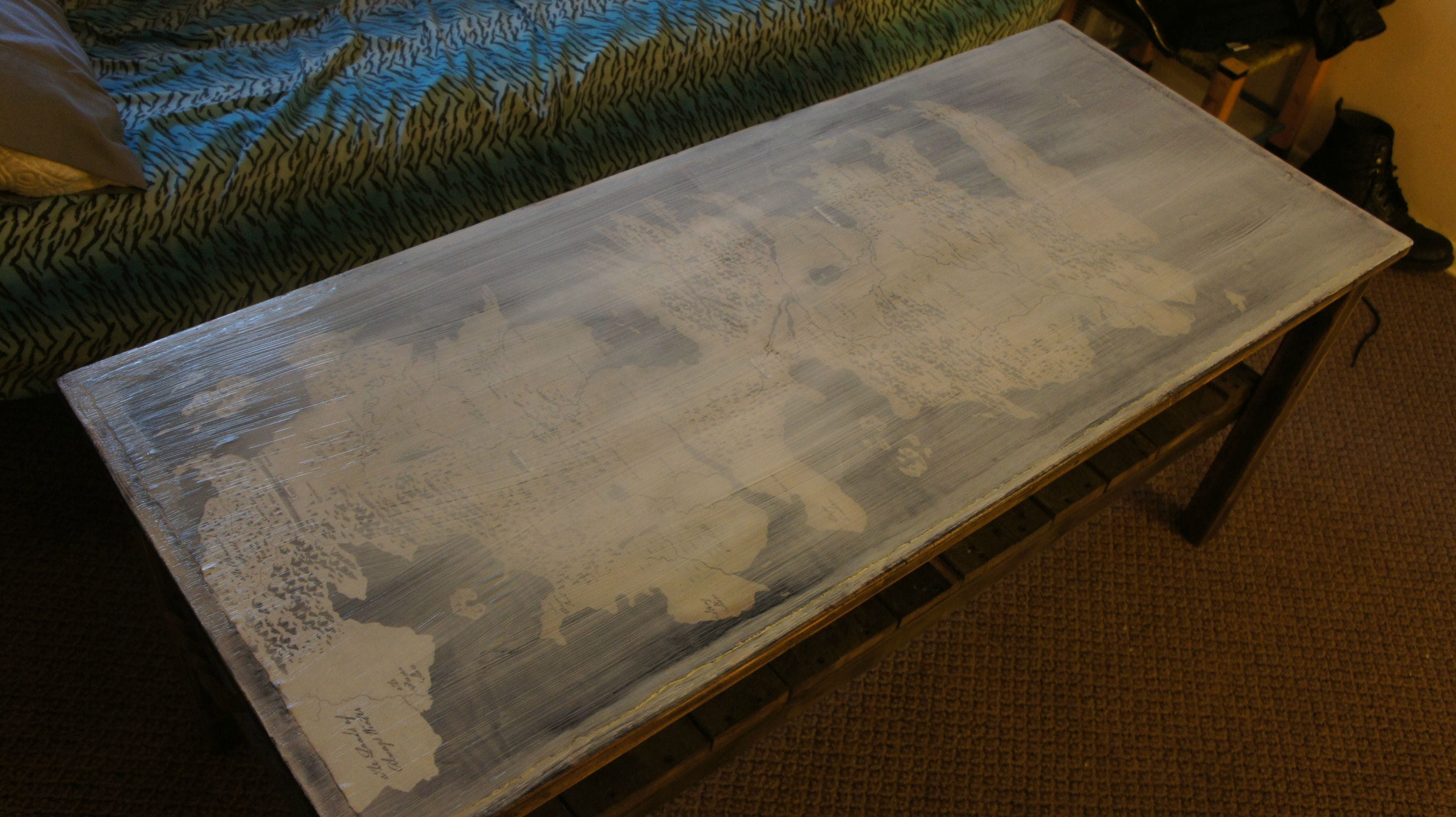 When the whole thing was done, they did what any Song of Ice and Fire fans would do—they played a modified Game of Risk using the table as the board. 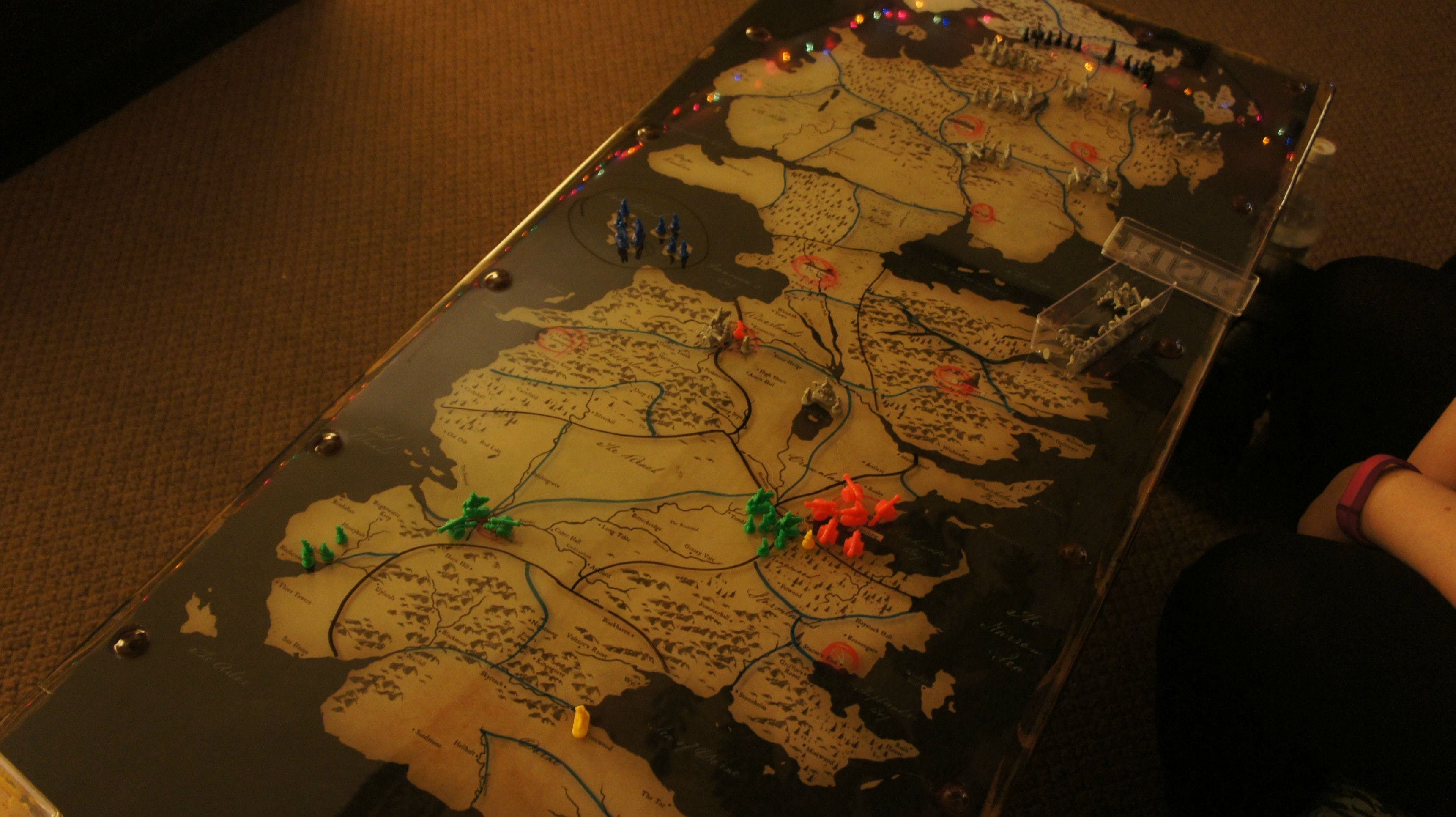 The whole process took about five months, given that the two were busy with work and grad school.

But it will all be worth it when season 5 airs, and the couple can throw their Game of Thrones party complete with the perfect centerpiece.