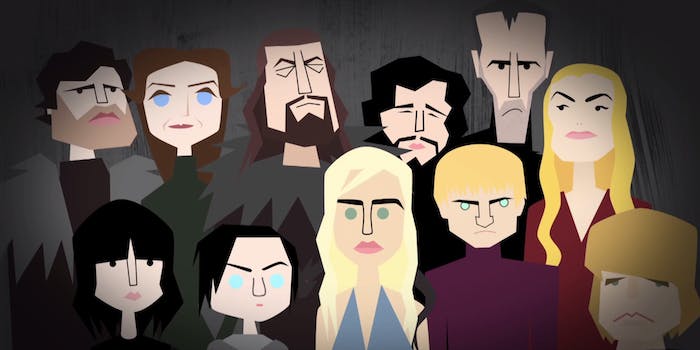 The real-life historic power struggle that inspired ‘Game of Thrones’

The true-to-life story behind 'Game of Thrones,' explained.

Game of Thrones may have plenty of twists and turns, but as Snoop Dogg helped remind us last weekend, it pales in comparison to real history.

We already know that much of the series is based on the Wars of the Roses, a power struggle between two major families vying for the English throne that spanned generations. Let TED-Ed explain in the video below.

With plenty of bloodshed—and even more political intrigue—the English throne changed hands way more often than the Iron Throne does in the show. The changing of who’s winning, seemingly at the drop of a hat? That we recognize from both. There’s even flashes of Cersei Lannister, Ned and Robb Stark, and Daenerys Targaryen as two families—Lancaster and York—battle for control.

If the game of thrones plays out the same way the Wars of the Roses did? A Targaryen restoration will be in the books, but don’t expect George R.R. Martin to necessarily stay true to history.

We can only hope that the turn of events doesn’t take more than a century to play out.