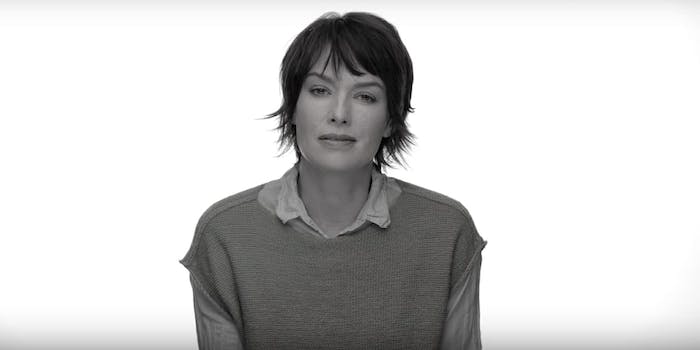 It's displaced half of Syria's population alone.

The cast of Game of Thrones is uniting on one front for a worthy cause.

The stars of HBO’s hit fantasy series teamed up with the International Rescue Committee and Omaze to bring awareness to and raise funds for the millions of people affected by the Syrian refugee crisis.

Ten current and former cast members appeared in the first PSA for the Rescue Has No Bounds Campaign, including Lena Headey, Maisie Williams, Sophie Turner, and Nikolaj Coster-Waldau. The campaign coincides with the fifth anniversary of the Syrian refugee crisis on March 15.

“We are currently facing the worst humanitarian crisis since World War II,” David Miliband, president and CEO of the International Rescue Committee, said in a statement. “Our partnership with HBO and Game of Thrones—which premiered around the same time the war in Syria began—hopes to galvanize the general public to take action and rise up for refugees.”

Around 250,000 people have died during the five-year crisis, which has also left 60 million people displaced worldwide, including half of Syria’s population. As Headey notes in the PSA, that’s close to the combined populations of London and Paris. All of those people badly need help.

People can donate through the IRC’s website or Omaze. The latter site offers a variety of prizes, from clothing and memorabilia to the chance to win a trip to the Los Angeles Game of Thrones premiere and hang out with the cast in April. (The minimum donation for that is $10.)

Omaze is a frequent partner in charity campaigns with once-in-a-lifetime prizes. The casts of Star Wars: The Force Awakens, Star Trek Beyond, and Avengers: Age of Ultron have also teamed up with the site and have raised millions for various charities.

Given how much secrecy surrounds Game of Thrones this year, the top prize of a premiere ticket is even more alluring to fans who don’t want to wait until April 24 to see how it unfolds. The bonus, in this case, is that if you win, you’ll also have helped a good cause along the way.