Jon Snow’s death and resurrection on Game of Thrones this season has opened the gates for some fans to hold out hope for other characters who have met their demise.

They once believed Stannis Baratheon survived his death by Brienne of Tarth’s sword Oathkeeper, some were in denial about the nature of Roose Bolton’s death (while playing along with Ramsay’s official stance on the matter), and now some people are holding onto hope that one of the sadder Game of Thrones deaths to date is only a ruse.

In “Oathbreaker,” Ramsay is seen in Winterfell meeting with Smalljon Umber, who wants the Boltons’ help with the wildlings who have settled south of the Wall after Jon let them pass. In return, Ramsay wants Smalljon to bend the knee and swear his loyalty—something he refuses to do. Instead, he brings Ramsay a gift in the form of the wildling Osha, Rickon Stark (who hasn’t been seen since the end of season 3), and Rickon’s direwolf Shaggydog.

It’s that last one that particularly gutted fans because Smalljon Umber brings Shaggydog’s severed head to Ramsay when he asks for proof that Rickon Stark is legitimate. 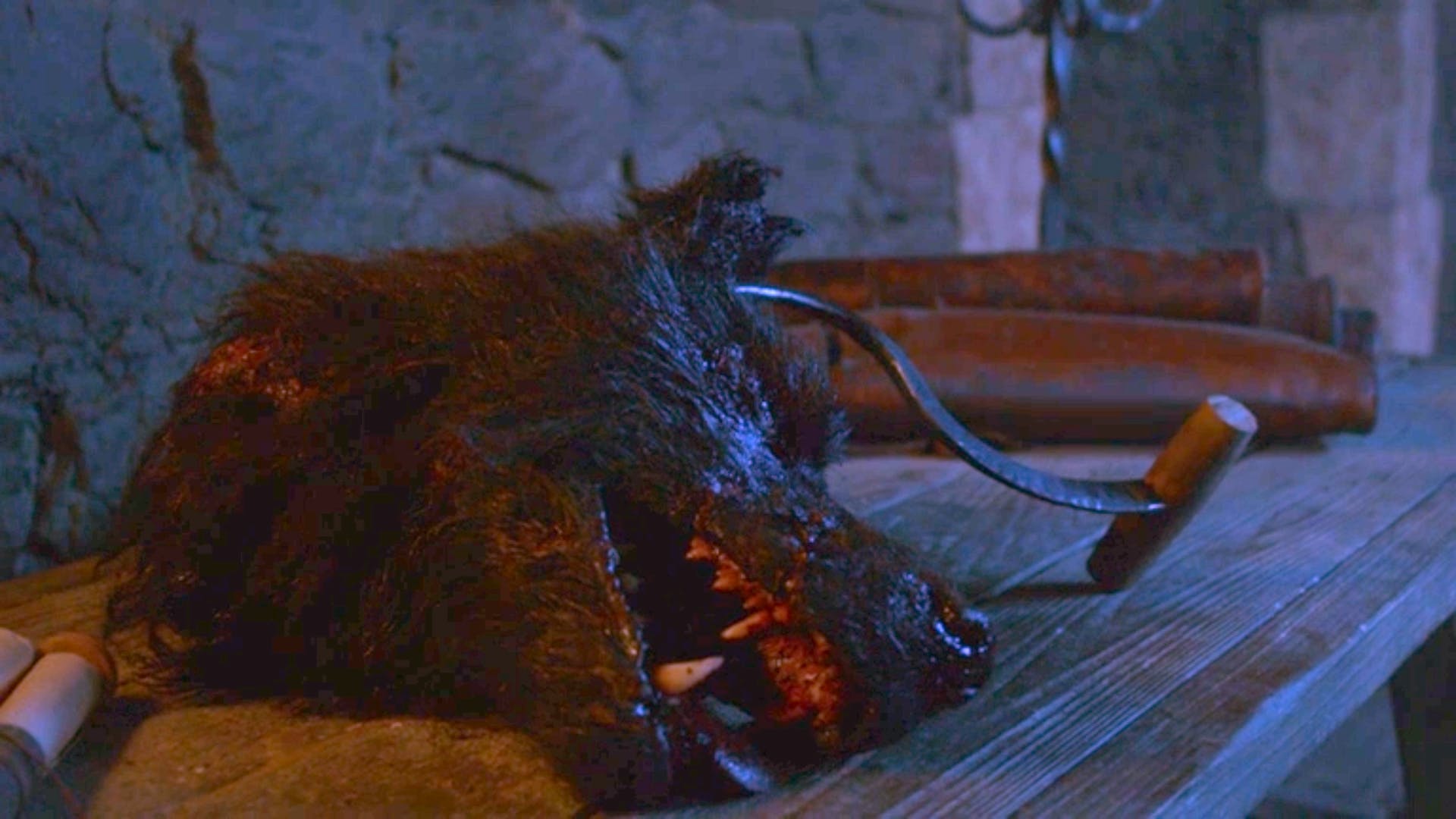 On the surface, the betrayal by House Umber seems out of character, especially to book readers. House Umber was fiercely loyal to the Starks—so loyal that Bran instructed Rickon and Osha to seek them out at the Last Hearth—so the idea of giving Rickon up after likely housing him for so long seemed a bit out of character. And something seemed off about the size of Shaggydog’s head, especially compared to Grey Wind’s after the Red Wedding. Soon enough, the Shaggydog truthers began to step out of the woodwork. Could Shaggydog still be alive in a classic switcheroo?

It’s a theory that, Art Parkinson, who is reprising his role as Rickon after being away for three years, has debunked.

“Uh, yeah, I’d say so,” Parkinson told The Huffington Post on Monday when asked if the dead wolf’s head on the table was actually Shaggydog. “It was a little bit disappointing because, you know, looking at the dogs we had on set … and that you’d never really get to hang out with them again. When I read that Shaggydog was dead, I was definitely a little upset.”

Confirmation of Shaggydog’s death from Rickon himself will likely not sway the people hoping for some grander conspiracy, and the interaction between Ramsay Bolton and Smalljon Umber might be enough to start planting some seeds. If the Umbers are secretly conspiring against the Boltons, it could be a setup for a hell of a twist.

“The North Remembers” is the name of a season 2 episode and an often-uttered phrase by people in the North; an older woman at a Bolton-led Winterfell uttered it to Sansa early in Game of Thrones’s fifth season, and Ramsay said it to Sansa when he explained his reasons for turning Theon Greyjoy into Reek. It essentially boils down to, “We don’t forgive or forget the injustices done to us and those we’re loyal to,” although one theory suggests it could’ve originally referred to the weirwood trees located across the North.

For one, it explains why, three seasons later, Harald Karstark is still unforgiving of the Starks for killing his father, who disobeyed Robb’s order to not kill their Lannister prisoners. And it might also explain how some fans believe that practically every other major Northern house is conspiring against the Boltons (despite any outward appearance of loyalty) to ultimately put a Stark back in Winterfell.

It’s all part of the Grand Northern Conspiracy, a multi-part examination of A Song of Ice and Fire and intertwining all of the Northern families’ ambitions together to unite under one banner, that of their liege lord to whom they’ve always been loyal.

The largest part of the theory rests on a book plot that never made it into the show: shortly before his death, Robb Stark—under the impression that Bran and Rickon were dead, Arya missing, and Sansa married off to Tyrion Lannister—planned to legitimize Jon Snow and name him his heir if he didn’t have any children. He held a council meeting about it with witnesses, and it’s believed that the proclamation ended up in the hands of someone loyal to the Starks.

Since Robb’s legitimization of Jon never occurred in the show, the Northern lords might rally behind Rickon, who some know is definitely alive—or maybe even Sansa, who is seen arriving at Castle Black in next week’s previews and almost definitely has something to do with the upcoming Battle of the Bastards.

(On the other hand, it’s hard not to notice the colors Jon wears in battle later on in the season.)

“The mummer’s farce is almost done”

Right now, with the Boltons being the most powerful family in the North, other families are bending the knee or pledging their loyalty. Smalljon Umber even brought in Shaggydog’s head along with his gift of Rickon Stark. But part of the Grand Northern Conspiracy includes a giant ruse by a Northern lord who pledges his loyalty but doesn’t actually mean it.

Wyman Manderly, the head of House Manderly, is one such man motivated by fear and revenge. The Lannisters hold his son and heir, Ser Wylis, as prisoner, so Wyman is essentially blackmailed to serve the Boltons and play nice. But his other son, Ser Wendel, was with Robb Stark and killed at the Red Wedding by the Freys and Boltons. Ser Davos Seaworth seeks Wyman out to join Stannis’s cause in A Dance With Dragons.

At one point, Wyman has a man who looks similar to Davos executed and displays his head and hands (including one with fingers cut down to look like Davos’s hand) in order to prove his loyalty and have his son released. But he also reveals that he’s just biding his time until he can strike against the Boltons. (For instance, it’s widely believed Wyman killed three Freys, baked them into pies, and served them at Ramsay Bolton’s wedding to the Boltons and Freys as revenge for the Red Wedding and for violating guest right.)

And that time is coming soon. Wyman says he will raise his banners for Stannis (and many northern houses will follow) if Davos recovers his true liege lord, Rickon Stark.

For some fans, Smalljon Umber bringing in the head of “Shaggydog’” might be the show’s equivalent of killing a fake Davos to prove their loyalty. Bringing Rickon along is certainly a big risk, and even with Shaggydog’s head, Umber’s refusal to kneel looks suspicious for some fans.

And some even believe that Ramsay holding Rickon hostage will become Game of Thrones’s version of the Pink Letter, the taunting letter from Ramsay that threatens to “cut out [Jon’s] bastard’s heart and eat it” if he doesn’t meet his long list of demands—some that include returning his wife (Jeyne Poole in the books, Sansa in the show) and Reek, turning over Selyse and Shireen Baratheon, Melisandre, and Mance Rayder’s wife and baby. If Ramsay threatens Jon’s half-brother, that might be the set-up to pin bastard against bastard since Jon’s watch has ended.

But will Wyman Manderly show up? House Manderly was namedropped by Harald Karstark as one of the other Northern houses on the Boltons’ side; Karstark and Umber were the other two, and we saw how House Umber showed their loyalty to Ramsay.

Even if House Manderly and Umber remain loyal to the Boltons, there is still at least one major house that could pull some of this off: House Mormont.

Located on Bear Island, an island located far northwest of Winterfell and separated by water from the rest of Westeros, the Mormonts are an old and proud family loyal to the Starks. They’re also quite bold. Look what Lyanna Mormont, the 10-year-old Lady of Bear Island, sent Stannis Baratheon when he asked for their support. 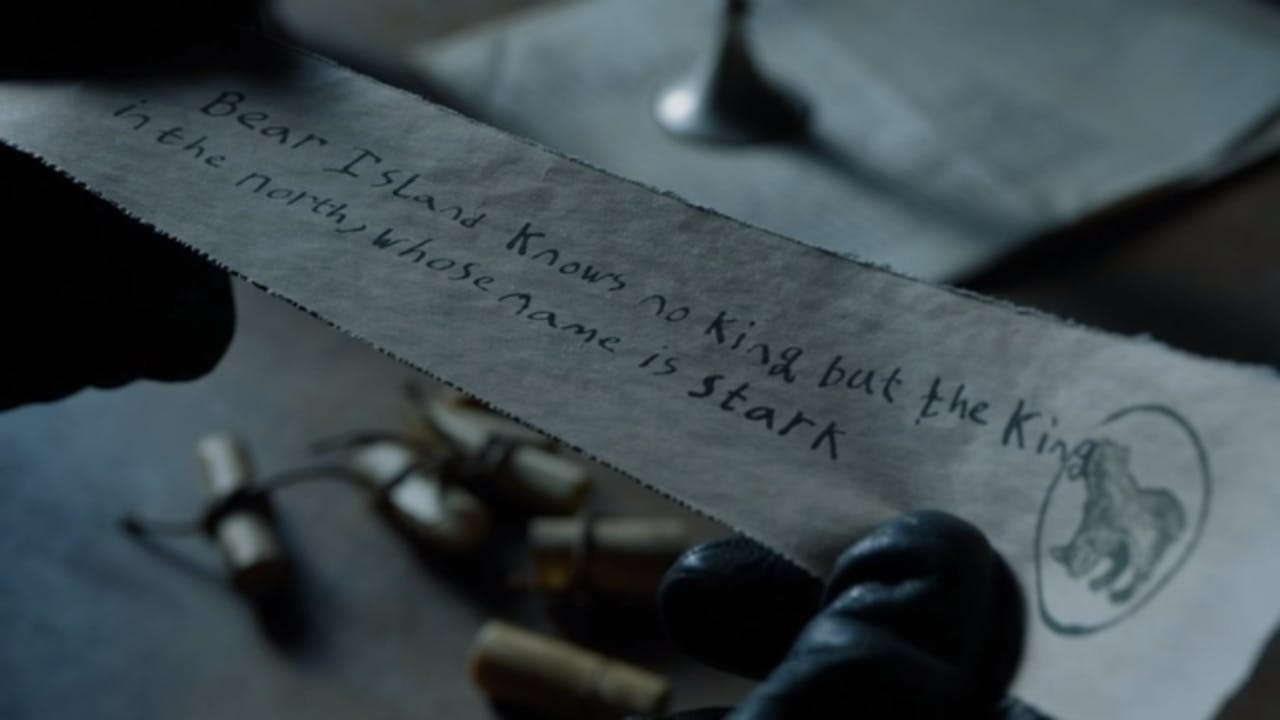 We also know House Mormont through Jeor, the one-time Lord Commander whom Jon served as a steward in past seasons (Jeor also gave Jon his Valyrian steel sword, Longclaw), and Jeor’s banished son Ser Jorah, who’s still looking for Daenerys Targaryen and hiding a worsening case of greyscale. House Mormont as a key ally instead of House Manderly, a family TV fans haven’t really met, would give viewers a recognizable family to root for, one that’s being led by a badass who’s still loyal to the Starks even though all of the Stark boys are dead according to public knowledge.

Parkinson’s debunking is reason enough to let go of the notion of a Grand Northern Conspiracy—that’s if you don’t think he’s lying. But there may be another reason for it: Even though Game of Thrones is doing the Greyjoys’ kingsmoot plot in season 6, tying in something as big as the Grand Northern Conspiracy might be too much of a task, even for a show of this grandiose nature.

It involves Northern houses we barely know and are asked to trust (yes, even the Mormonts), bringing back the least-familiar Stark who’s been absent for three seasons, and with numerous storylines being told this season, there simply isn’t enough time to develop the Umbers or another Northern family to lead the Grand Northern Conspiracy like there is in the books.

“The show has reached a point where excess characters are getting killed off in droves,” one redditor wrote. “Even big characters are dying a lot, see Roose Bolton or Alliser Thorne. Rickon, while he is still alive, is a loose end that hurts other storylines (because he is a living, male, legitimate heir to Winterfell who is known to be alive), and has no storyline of his own. He needs to die, and he will die this season.”

And if Art Parkinson is right and Shaggydog is dead after all?

We should probably be very, very worried about Rickon.