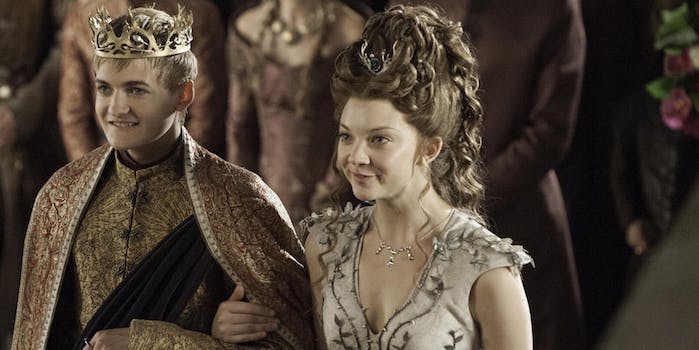 How much would ‘Game of Thrones’ weddings actually cost?

A real-life wedding planner tells us how to set up our own Purple Wedding—regicide and all.

Warning: This article contains spoilers for A Song of Ice and Fire and Game of Thrones.

Game of Thrones is now officially the most-watched HBO show of all time, and it has a fanbase with a ferocity to match. People name their kids after the show. They get tattoos. They build the most elaborate cosplay costumes imaginable. Some people even set up Westerosi weddings.

But even the most determined (and wealthy) fan would find it extremely difficult to accurately replicate the decadence and bloody excesses of the weddings of Game of Thrones—whether that’s a regal ceremony backed by the two most powerful families in the land, or the “barbaric splendor” of a Dothraki marriage, with 40,000 unruly tribesmen in attendance.

But we started to wonder: What if you could? How much would a bird-filled cake, a five-dwarf joust, and a rare poison necklace actually cost, in modern-day USD?

What if you were truly determined to host one of Game of Thrones’ infamous weddings in real life, and had the resources to do it? What challenges would you face, and just how much would it set you back?

Even with our copious infographic experience, we couldn’t calculate this one alone. So we roped in the help of Sarah Haywood, described by Time as “Britain’s most sought-after wedding planner and an authority on multimillion-dollar weddings.” Haywood has dozens of high-end nuptials under her belt, and she agreed to lend us her professional perspective.

The good news: Not one of the weddings in Game of Thrones is out of the question. “Absolutely everything is possible if you get the right people in,” Sarah says, and, of course, “if you’ve got the money.” With the largest, most ostentatious weddings, it’s just a case of having sufficient infrastructure, and planning and logistical costs can—and do—run into the millions.

Using Sarah’s expertise, we’ve put a figure to every one of the five weddings seen in Game of Thrones thus far. Read on, and find out just how much it’d cost to host your own Red Wedding.

First however, here’s the headline figure* for each Westerosi wedding—ranked up against some of the most high-profile and lavish celebrity weddings in recent memory. We used E Online’s wedding breakdown for Kim Kardashian and Kanye West. For Michael Jordan’s vows and the Royal Wedding, we deferred to the good people at BuzzFeed.

If the scrollable image above doesn’t work with your browser, open the entire image here.

The legendary status of Game of Thrones’ weddings was cemented in the show’s very first episode, when Daenerys Targaryen was forcibly wed to the tribal chief Khal Drogo, arranged by Dany’s impressively creepy brother Viserys in exchange for an army.

If you wanted to tie the knot Dothraki-style, the total proceedings would cost you more than a whopping $8 million. Here are some of the key costs:

Coordination and production costs: $1,617,977—The logistics of a wedding involving 40,000 unruly guests is seriously pricy. Accommodation for them all is a staggering 4 million dollars for two nights—the single biggest cost of the wedding—but the planning alone is going to set you back another 1.5 million.

Considering this was the marriage that effectively lost Robb Stark his head, you’d think it might be a bit more ostentatious. But no, these vows were as low-key as you can get and held in a forest by torchlight. The only cost here would be the officiant’s fees (around $500) to make it “official.”

Ceremony and venue: $41,113—With enough money, and the right bribe—sorry, donation—any place can be rented, Sarah says. For a major religious venue like the Great Sept of Baelor, $16,000 in hiring costs along with another $4,000 donation to grease the wheels should would do nicely. A castle hall for the subsequent evening feast is a little more than $20,000 for the night.

Likewise, the health and safety checks will be a steal at just $900, and coordination costs fall just short of the $21,000 mark.

Ah, this one. The wedding that has gone down in television infamy. The Red Wedding. Robb Stark hoped by marrying off his uncle Edmure to one of Walder Frey’s daughters, he could win back the lord to his cause. Lord Frey had different ideas. I worry for your partner—and your sanity—if you intend to base your marriage off this one, but here we go anyway.

Food and drink: The books tell us that Robb Stark’s soldiers weren’t catered for, but for the dual feasts held in each tower of the Twins, it’ll cost around $63,000—or $126 per high-born guest. The booze bill is more expensive, at a cumulative $340,000 for all 3,500, noble and low-born alike.

At the dawn of a new century, King Joffrey of the Houses Baratheon and Lannister was joined in wedlock with Margaery of House Tyrell. From a several-dozen-course feast to jousting dwarfs, the proceedings are epic in every sense of the word, and they have a pricetag to match.

The green room, furniture, props, and sound and lighting equipment to support all of this comes to a cumulative $148,750.

Another logistical issue, flagged by Haywood, is the sheer number of courses: bizarrely, one of the most difficult aspects of the entire wedding would be finding enough plates and cutlery of a high enough quality for them all. That single aspect would ring up an unbelievable $1,400,000 bill—just the luxury glassware would be $640,000.

Infographic and illustrations by Max Fleishman.

A very special thanks to Sarah Haywood Luxury Wedding Planners & Event Designers for providing the statistics that made this article possible.

*Due to a degree of uncertainty over Westerosi taxation and economic policy, none of the prices quoted include tax.