Warning: This article contains possible spoilers and speculation for Game of Thrones’s season 6 and A Song of Ice and Fire.

Game of Thrones dropped its first massive information dump of season 6 on Thursday with the release of more than 20 new photos of the cast, and fans have been pouring over them ever since. But once the pure excitement wore off, questions started to pop up: What’s next?

The photos tease some of the season’s biggest players and their respective locations and are mostly presented to be as vague as possible. The amount of information we could feasibly take from these is little-to-none, except that many of these characters are a little worse for wear—and that’s probably not going to improve because they live in Westeros and Essos.

There are still breadcrumbs for fans to pick up and follow, and with more than two months until a new episode and who knows how long until the next book, fans will surely put every piece together during the rest of the hiatus before the show likely crumbles them.

1) Is Game of Thrones going to make Sansa’s life even worse than it already is?

Sansa Stark has been through so much shit since the beginning of the series, within her own plot from the book and when she was forced to suffer another character’s misfortunes. She lost her direwolf, witnessed her father’s beheading, was held in King’s Landing against her will, beaten by Joffrey Baratheon’s guards whenever he ordered, nearly raped in King’s Landing, stripped down in the throne room, psychologically toyed with by Cersei Lannister, forced to marry Tyrion Lannister, nearly killed by her aunt Lysa Arryn before then witnessing Lysa’s death, raped on her wedding night, tortured and locked up by her husband Ramsay Bolton, and nearly killed by his lover before she jumped off the walls of Winterfell. By the end of last season, it seemed that Sansa was done with being kicked around, and fans couldn’t be more ready to see her unleash her fury.

But when this photo of Sansa came out, some fans wondered if the show had delivered yet another devastating blow: Is she pregnant with the appalling Ramsay’s child? 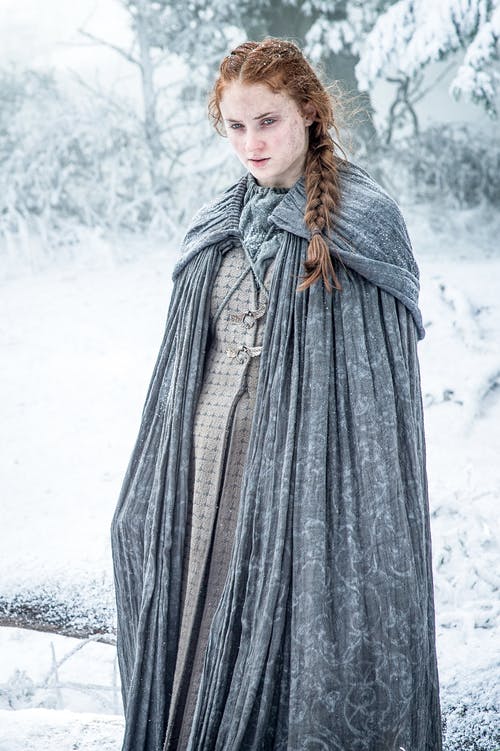 This is a terrible, horrible, no good, very bad idea, and one that, if it happened, would likely get even more of a backlash than the one that followed the end of “Unbowed, Unbent, Unbroken”—especially after we were told that the showrunners had been “influenced” by the controversies from other controversial scenes in Game of Thrones.

From what we can tell, it just looks like an odd angle and the bump some people perceive is just some bunching in her heavy overcoat or her hands. Before she and Theon made that jump, she planned to leave. She was dressed for the occasion, and being a Stark from Winterfell, she prepared for treacherous frozen weather. (Whereas Theon, who joined her at the last minute, not so much.) It’s not clear what happens next for Sansa, we do know it’s going to be big.

“I mean this season is a really, really big one for Sansa,” Turner told Entertainment Weekly. “It’s probably her best season yet. It’s her really coming into her own. She, this season, really commands the respect that she deserves and she grabs hold of it and she runs with it and it’s really good.”

2) Who’s that person in the photo with Melisandre?

In our look at Melisandre, the red priestess, she appears to be leaving Castle Black after she arrived there at the end of last season, unable to tell Davos Seaworth, Hand of the King to Stannis Baratheon, what had happened to Stannis’s daughter Shireen. But what people noticed instead of Melisandre is the person located on the horse to the left 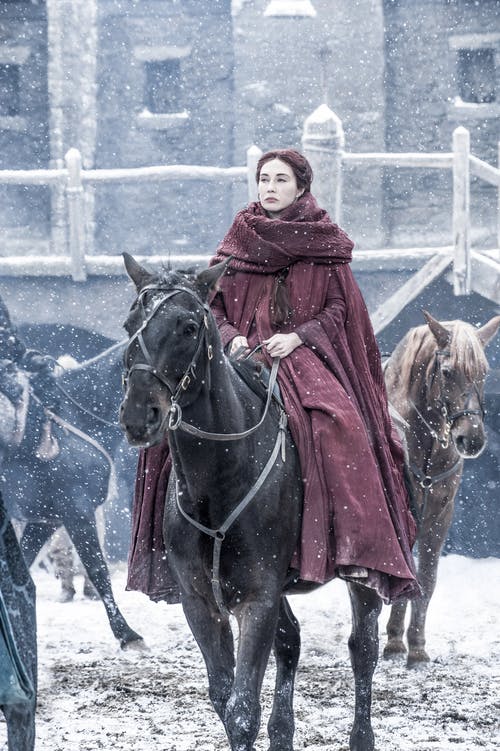 Based on who we know is at Castle Black (and who could be nearby), we have a few options. While we don’t know where Sansa is exactly headed, it’s probable that she’s going north to the only place where she knows she still has family: the Wall to her half-brother Jon Snow. It would likely take her at least a couple episodes to get there—and that’s if she doesn’t run into anyone along the way.

Davos is also a candidate, but he already doesn’t trust Melisandre, and whatever faith he had in Stannis’s faith in her may turn to anger once he learns of the deaths of the Baratheons.

The person appears to be wearing black, and who do we know who wears a lot of black and is located at Castle Black?

For most of the Night’s Watch, leaving Castle Black without direct orders would be punishable by death. But Jon, if he is alive, might defy that.

One interpretation of Night’s Watch oath would allow Jon to be free from his oath if he died and was resurrected (one of the more popular theories). Plus, given how his fellow brothers just tried to kill him, would he even be welcome there anymore?

3) Where are Bran and the Three-Eyed Raven? 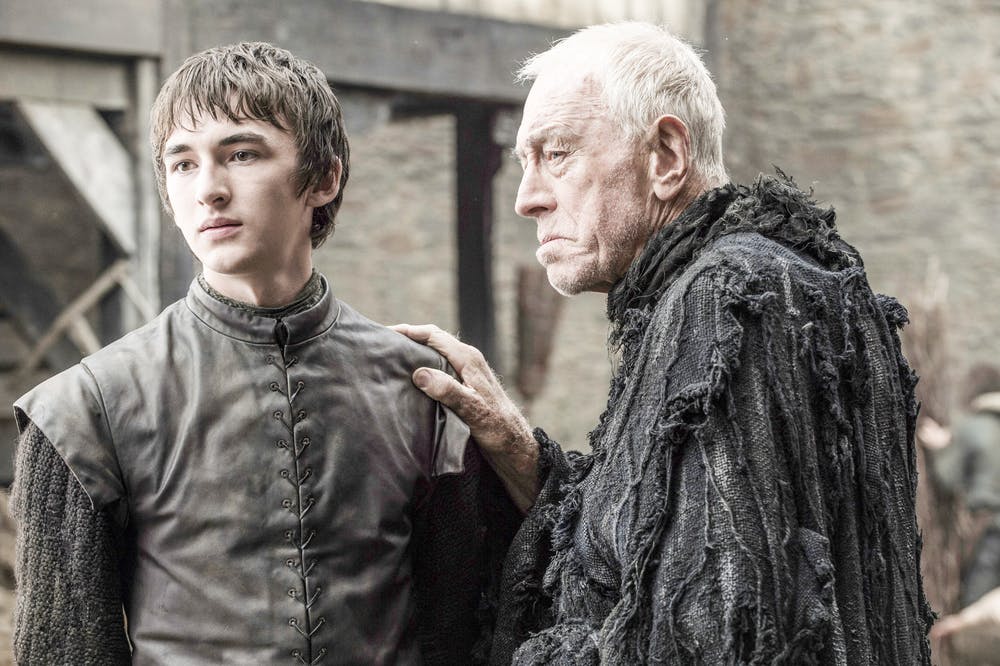 While we still don’t know the when, we do have an idea of the where, thanks to some keen eyes from fans. It’s probably Winterfell.

In A Dance With Dragons, we get a little insight into Bran’s training and he does have many dreams and visions through the weirwood tree in Winterfell. He sees many scenes from the past, including that of his father as a younger man, and at one point he may have even contacted Theon through it. (This is no longer possible, since he’s escaped Winterfell.) The place where he grew up could still offer a wealth of information.

At first glance, nothing seems too out of the ordinary from the photo of Arya Stark. She’s still afflicted by blindness, thanks to the Faceless Men, and she’s on the streets. If the show follows the book she’s still in the midst of her training, but it’s certainly not a walk in the park. 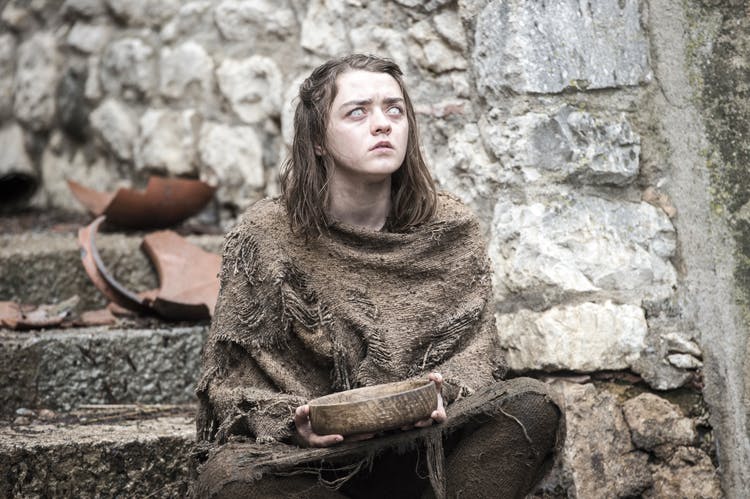 She’s not warging into Nymeria (who’s still probably roaming somewhere in Westeros) or skinchanging into another animal in the photo—a gift all of the Starks possess in the books but has exclusively been Bran’s thing throughout the show. That act has a different effect on the eyes. (Here’s an example of how that looks.) But Arya is nearing a point in her book story where her warging isn’t just limited to wolf dreams anymore, and it’s an essential part of how she eventually regains her sight. With Bran’s abilities being front and center, could we see some of the other Starks finally learning to warg?

5) What’s with the smoke near Davos?

Whatever Davos is watching below in Castle Black, it completely has his attention. 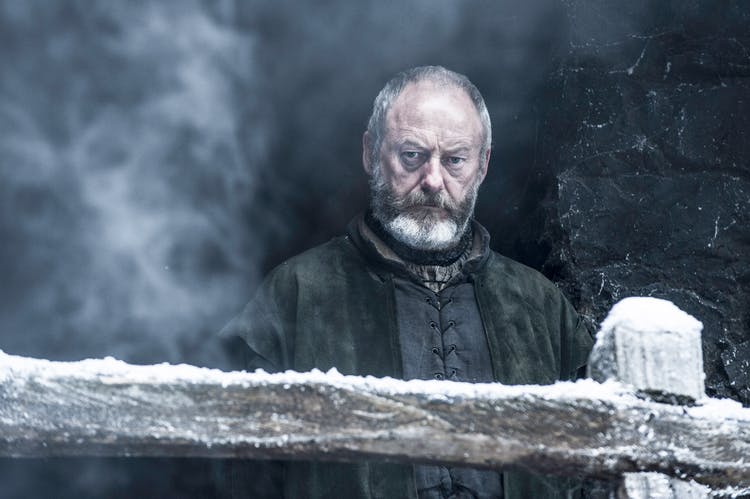 However, the left side of the photo offers a more intriguing teaser. Many fans think it’s smoke rising from the ground, and short of a regular fire (which probably wouldn’t make as much smoke), there are a couple of other options for the source. The Night’s Watch could be burning Jon on a pyre, to dispose of his body, or Melisandre could have something to do with it.

If he wasn’t shocked by everything that he’s seen before, he probably will be now—just like the rest of us.

Photo via Game of Thrones/Facebook