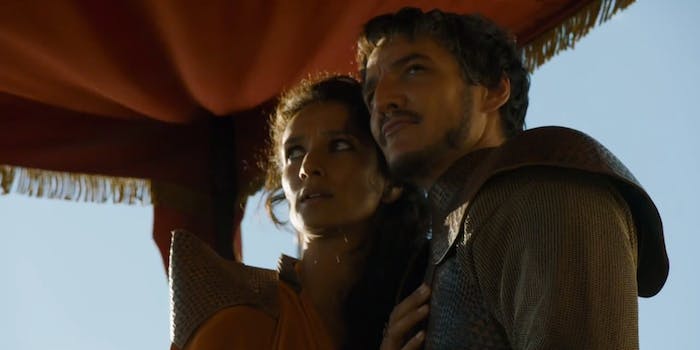 Here’s the Viper-Mountain fight reimagined as ‘The Princess Bride’

OK, we get it, Oberyn Martell is totally Inigo Montoya.

Warning: This article contains spoilers for Sunday’s Game of Thrones episode, “The Mountain and the Viper.”

OK, OK, we get it. Oberyn Martell went full-on Inigo Montoya on Game of Thrones.

If you didn’t already notice the similarities between the Dornish prince wanting to avenge his sister’s death and the Spaniard set on killing the man who killed his father, Twitter was apt to remind you of that fact during the final minutes of “The Mountain and the Viper.”

Game of Thrones tonight was like watching Inigo Montoya in an extremely violent alternate universe. #GoT

Hello. My name is Inigo Montoya. Prepare to…no, keep your fingers away from my eyes…

While watching the end of tonight’s Game of Thrones who else thought Oberyn of Dorne was doing a damn good Inigo Montoya impersonation. Haha

I don’t think it’s inconceivable to say that Oberyn sounded an awful lot like Inigo Montoya during that fight. #GoT

And when everyone on Twitter makes the same pop culture realization, it tends to kill the joke. Slowly but surely.

If we could all just make a loving pact right now to spare the world a million Inigo Montoya/Oberyn Martell jokes, that would be rad.

Last night, even at 2 a.m., there was a tweet per minute comparing Oberyn to Inigo Montoya

“My name is God. You made the millionth joke about Oberyn Martell and Inigo Montoya. Prepare to die.” #GameOfThrones

It’s definitely an accurate comparison; George R.R. Martin himself said that Oberyn was an homage to Inigo after seeing The Princess Bride. But it’s also something people have figured out eight weeks ago when he first told Tyrion Lannister why he had really come to King’s Landing.

So we decided to give you the ultimate Oberyn-Inigo crossover tribute with some help from GRRM and William Goldman* in hopes that people will stop making the comparison. Because yes, we get it.

It’d be nice to imagine Oberyn retiring to sunny Dorne with nothing left to do except visit more brothels with Ellaria Sand now that he got his revenge, but just remember. If you thought this story had a happy ending, you haven’t been paying attention—nor did you remember correctly.

“This isn’t how I imagined it, but it’ll do,” Oberyn thought as he looked at the crowd. Ellaria seemed worried that he was to fight that, but he had nothing to fear. His day had come, and he was going to kill that.

Oberyn had been dreaming of this night for years. He told this to almost anyone who would listen that he planned to enact revenge on the Mountain, Ser Gregor Clegane, for raping and murdering his sister Elia and killing her children 18 years ago. He’s seen the Unsullied fight in Astapor in his youth and he’s learned plenty about the art of poisons. He hadn’t gained the nickname of the Red Viper for nothing.

Finding him hadn’t been hard. Finding the opportune moment to kill him, however, was a different story.

Tywin Lannister promised him a meeting with the Mountain. Volunteering as Tyrion’s champion gave him the only opportunity to kill the Mountain and get away with it—and in front of a crowd, no less. He knew that Tywin had ordered the killings, but he could deal with him another day.

Tyrion shook slightly as he stood by Ellaria’s side. He promised to fight for the Imp’s freedom, but he also had his own agenda to worry about.

“I’m… sorry… Elia…” he whispered before grabbing his spear and spinning it for the crowd.

The Mountain heard him, but nothing connected at first.

“Who?” the Mountain asked. He carried a sword that was almost as tall as Oberyn himself and towered over almost any man living in Westeros.

“Hello, my name is Oberyn Martell. You raped her, you murdered her, you killed her children. Prepare to die,” Oberyn said.

“Who?” the Mountain asked again.

“My sister,” Oberyn said. “Princess Elia. And do you know why I’ve come all the way to this stinking shitpile of a city?”

“So you’re that Dornish brat I’ve heard about. But no matter. I will kill you just the same. Did you come here to talk or fight?”

“Hello,” he said again. “My name is Oberyn Martell. You raped her, you murdered her, you killed her children. Prepare to die.”

The two exchanged blows, neither making any hard marks. The Mountain was big, but Oberyn could move fast enough to avoid being hit. It reminded Tyrion of Bronn tiring out his opponent during his only other trial by combat.

Oberyn put all of his focus on the Mountain, who tried going for the easy kill; but Oberyn was just a little too fast for him to make his mark.

“Hello,” he said, “my name is Oberyn Martell. You raped her, you murdered her, you killed her children. Prepare to die.”

“STOP SAYING THAT!” the Mountain roared as he knocked Oberyn on the ground and broke his spear.

“Hello, my name is Oberyn Martell. You raped her, you murdered her, you killed her children. Prepare to die.”

The Red Viper finally hit his mark. One stab in the stomach. Another in the back of the leg.

“HELLO, MY NAME IS OBERYN MARTELL. YOU RAPED HER! YOU MURDERED HER! YOU KILLED HER CHILDREN! PREPARE TO DIE!”

And as the Mountain fell to the ground, Oberyn lept up and stabbed him again in the gut. Tywin and Cersei looked worried while Tyrion and Ellaria seemed hopeful that victory was imminent.

“Offer me anything I ask for,” Oberyn said.

“Anything,” the Mountain answered.

“I want my sister back, you son of a bitch. SAY HER NAME.”

The Mountain slammed Oberyn to the ground and knocked most of his teeth out. He then pressed his eyes into his skull. The crowd looked on, horrified.

“Elia Martell,” he said over Oberyn’s screams. “I killed her children. Then I raped her. Then I smashed her head in—like this!”

As Oberyn’s head made a terrifying crunching sound and Ellaria’s shrieks carried over everyone’s reaction, the grandfather closed his book with the smallest of smirks on his face.

“Jesus, Grandpa, what did you read me this thing for?” the boy, who may now need years of therapy, asked. 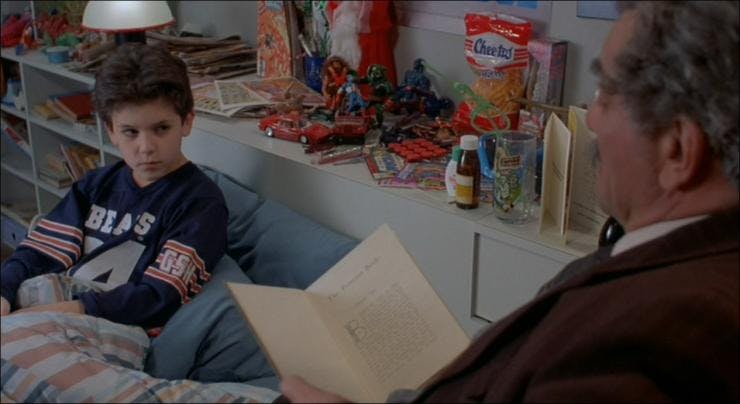 The credits rolled, largely in silence.

*With our sincerest apologies to GRRM and William Goldman.

Photo via Game of Thrones/YouTube