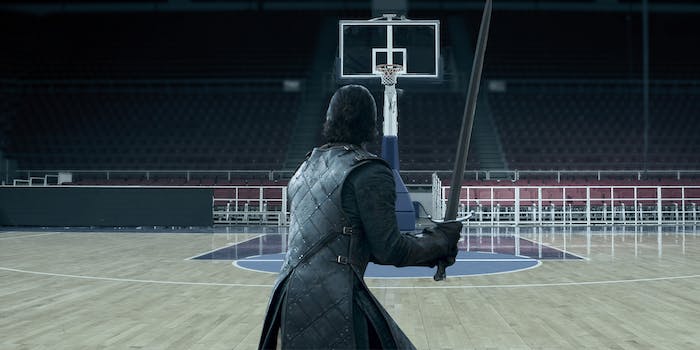 Photo via prophoto14/Shutterstock.com Screengrab via Game of Thrones/HBO | Remix by Jason Reed

Can LeBron James overtake the ‘Throne’ on Sunday night?

Last week, the intersection of theater nerds and Game of Thrones fans found themselves between having to choose between the Tony Awards and the hit HBO fantasy drama. Now sports fans are facing a similarly impossible choice of their own.

The Cleveland Cavaliers won Game 6 of the NBA Finals against the Golden State Warriors Thursday night, forcing a Game 7 Sunday night. It’s already been a nail-biter of a series as the Cavaliers came back from a 3-1 deficit to even the stakes, and it’s even inspired a conspiracy theory or two.

Meanwhile Game of Thrones will air its penultimate episode, “Battle of the Bastards,” Sunday night, pitting Jon Snow and Ramsay Bolton against each other in the show’s biggest battle to date. The episode has so many characters we love involved in the conflict that likely at least one of them won’t make it out alive. And the stakes are enormous: the entire North—not just Winterfell—is at stake.

The only problem? The two big television events air at the same time. Game 7 starts at 8pm ET while Game of Thrones begins at 9pm ET with a runtime of 60 minutes.

With a big intersection between NBA and Game of Thrones fans, they quickly realized the kind of choice they would soon have to make.

Hahaha. Sunday is going to be hectic… (Via @_MarcusD_)

I wonder if the NBA will hear me out and change game 7. Sunday nights are for Game Of Thrones.

NBA. Game of Thrones. This is all sorts of messed up.

HBO executives when they see that Game 7 of the NBA Finals is happening during the Game of Thrones time slot pic.twitter.com/8Vyc7RV3Wg

Between the NBA Finals Game 7 and the ninth episode of Game of Thrones on Sunday Night Twitter is going to be a new level of lit.

The easy answer to this would, of course, be “Why don’t we have both?” It’s 2016, many of us have multiple devices on which to stream one or both of these on WatchESPN or HBO Now, so why not keep an eye on one while paying attention to the other? But if you aren’t able to multitask or don’t have devices that can handle that kind of power, then it becomes much more difficult.

If you’re a major Cavaliers/Warriors/NBA/sports fan, go with your heart

Your pathway is clear: Go forth and watch Steph Curry and LeBron James duke it out for the NBA Championship, records to break, and any other acolytes up for grabs. Excluding possible delays or overtime, the game and the post-game ceremonies should be over by 11, so you could potentially watch Game of Thrones after on your DVR or HBO Go/Now, which has the episode right when it starts.

Just mute or temporarily unfollow anyone who live-tweets Game of Thrones on Twitter while you watch. (Hi.)

If you’re more of a Thrones person, you can still have your cake and eat it

The North Remembers, and so will you if you catch “Battle of the Bastards” live; there’s nothing like the pure excitement around watching a Game of Thrones with the rest of the internet. You can catch the first hour of the NBA Finals too so you can get a bit of both worlds, and besides, Twitter will more than have your back with sports fans and reporters Vining epic shots and fails straight from their TVs (in all their grainy glory).

By the time the dust settles from the battle, you’ll be able to tune back into the last half hour (or more) of the NBA Finals.

It’s not as dire as it seems, but NBA? Let’s not do this again next year.