Unpacking the fan theories about Hodor on ‘Game of Thrones’

Warning: This article contains minor spoilers for the latest episode of Game of Thrones and A Song of Ice and Fire.

“Home” provided Game of Thrones fans with one big answer and plenty of questions, but it also gave a beloved (and often underappreciated) character a moment in the spotlight.

During Bran Stark’s flashback vision in Winterfell, he saw younger versions of his father Ned, Uncle Benjen, and Aunt Lyanna, but he also saw a younger version of a boy named Wylis, who he knows better as Hodor. And Hodor could talk.

At the time, Wylis was a young stable boy at Winterfell, and while he didn’t know a thing about fighting, he had the size for it. Lyanna tried to rope him into sparring with Benjen—with his size and Benjen’s skills, she thought it would be a fair fight—and even gave him some pointers, but it was a fight that was never meant to be. Nan, much younger than when we first met her in season 1, put a stop to it, and Ned’s protest about how Wylis could be unstoppable if he learned to fight didn’t sway her.

“Well, he’s never going to learn to fight because he’s a stable boy,” Nan said. “So leave him be.” 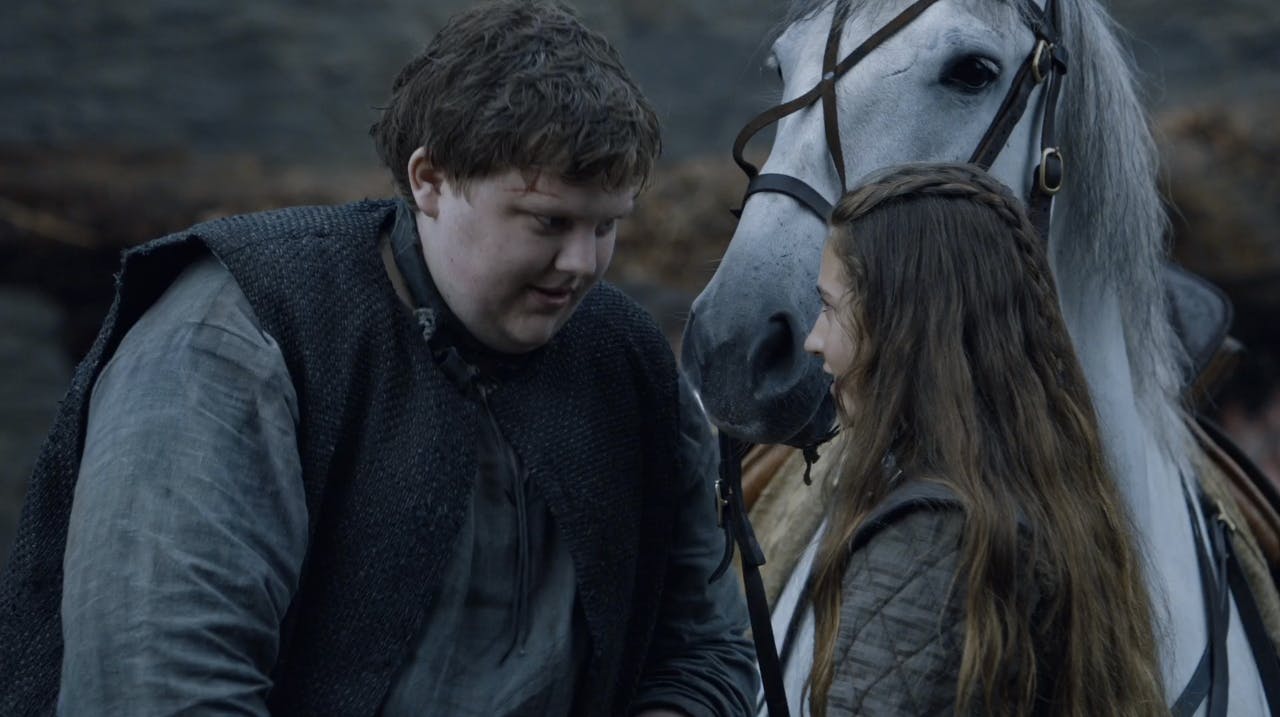 We’re probably going to be spending a lot more time in the Starks’ past this season, particularly with the fight at the Tower of Joy. Will we learn more about Hodor, though? That remains to be seen, although it’s probably not a coincidence that he was included in the original flashback.

Not much is known about Hodor, who’s been Bran’s constant companion since Jaime Lannister pushed him out of a window and was a loyal servant to the Starks long before that.

He was once called Walder in the books (which was likely changed to Wylis in the show so as to not confuse him with Walder Frey); he’s Old Nan’s great-grandson; he’s believed to be a descendant of Ser Duncan the Tall; Bran is able to warg into him at will (although he can’t enter one part of Hodor’s mind); and at some point in his life, he lost the ability to say anything except for “Hodor.”

We don’t even know his age, although Bran’s vision suggests that he’s at least somewhat close in age to Ned and Lyanna.

So what happened? Some fans have their suspicions; theories about Hodor have been churning online since long before we were introduced to his younger self. And from the looks of it, we might end up regretting some of those “Hodor” jokes before the end.

What happens when a skinchanger or warg goes in too deep?

We all know that Bran is a warg and has the greensight, but is it possible that he’s not the only warg up at the weirwood tree?

These fans believe that, if Hodor were a skinchanger, he would probably be able to enter the minds of horses, since he spent a lot of time with them as the stable boy. (Entering the minds of elk and deer—which are prey and will eventually turn brave men into cowards, according to knowledgeable wildling skinchangers—might also be potential options.)

Lyanna showed Hodor kindness and offered him advice on how to defeat her brother, so he might have skinchanged into Lyanna’s horse in order to spend more time with her. Lyanna’s white horse may also serve as another symbolic indicator that she is Jon Snow’s mother by way of Rhiannon, a figure in Celtic mythology who owns a white horse, flees an arranged marriage, and gives birth to a son who mysteriously disappears that very night.

Perhaps, at some point, the horse died while Hodor’s mind was inside of it, which would have major ramifications like his fear of lightning and his inability to say anything other than “Hodor.” The wildling warg Varamyr Sixskins has experienced multiple deaths while his mind was inside of his animals, but it wasn’t until his eagle’s death (taken from Orell) that he went insane for a brief period—and things quickly went downhill from there.

Is that even possible? The Three-Eyed Raven revealed in season 4 that he’s been watching Bran, Hodor, and Meera Reed for all of their lives—not just Bran. So if anyone would know about it, it would certainly be him.

Hodor could take his cues from Norse mythology

George R.R. Martin used real-life conflicts as the basis for some of A Song of Ice and Fire, so what’s to say that he didn’t do the same thing with mythology?

Some fans have noticed that Hodor sounds very similar to Höðr, the Norse god of winter. (Remember that; it’ll be important later.) He’s a son of Odin who’s blind and mostly keeps to himself, but he is tricked by the mischievous god Loki into throwing mistletoe, which kills his brother Baldr and triggers Ragnarok, aka the end of the world. Bran has already made Hodor fight and kill against his will, but how much more will he force him to do?

Kristian Nairn, who’s played Hodor since the beginning of the series, has become aware of the possible connection between Hodor and Höðr, although he appears to be as out of the loop as the rest of us, at least according to an interview with Vulture last month.

“Hodr, the god of winter. [Chuckles.] Yeah, yeah, yeah,” he said. “It’s cool, and it’s what helps make it all relatable, because their universe is not too far away from some things in ours. It’s just slightly different. They’re just a little bit off center.  And I’ve thought about that one, like, ‘Is that going to become relevant?’ Who knows? I know as much as you do, unfortunately.”

This wouldn’t directly explain why Hodor only says “Hodor,” but it could be a key piece in the bigger Hodor puzzle.

Hodor is the Great Other

We know plenty about R’hllor, the Lord of Light, and we’ve even seen what he can do, but we have even less information about his enemy, who is known as the Great Other because his name is never spoken. R’hllor and the Great Other have waged an eternal war for the fate of the world, and any creature of darkness (such as the White Walkers and wights) is a creature in the Great Other’s service.

According to one fan theory, Winterfell and the crypts beneath were originally built by Bran the Builder (who also constructed the Wall after the Long Night) thousands of years ago in order to contain the Great Other. The Starks have been buried in the crypts ever since to keep the Great Other at bay, which would give another meaning to the quote, “There must always be a Stark in Winterfell.”

Only the Starks are allowed in the crypts, but what if that were more than a rule?

This theory posits that Hodor—who once was too afraid to enter the crypts—ended up there as a boy and saw something that traumatized him or even took over his body. That body is now with Bran far beyond the Wall, in the weirwood tree with the Three-Eyed Raven—and there’s a part of his mind that Bran can never penetrate.

All he can say is “Hodor.” Perhaps that could be the Great Other’s name.

And even if Hodor isn’t being directly possessed by the Great Other, there may be a connection between the two. In A Dance With Dragons, Melisandre looks into the flames and sees a white, wooden face, a thousand red eyes, and a boy with a wolf’s face who howls. It’s suggested that Melisandre sees the Three-Eyed Raven and Bran, who she believes are champions of the Great Other. But what if she sees another person in the weirwood tree?

Nairn is completely onboard with this idea, but if that’s the case, we’ll never look at Hodor—either his name or his face—the same way again.