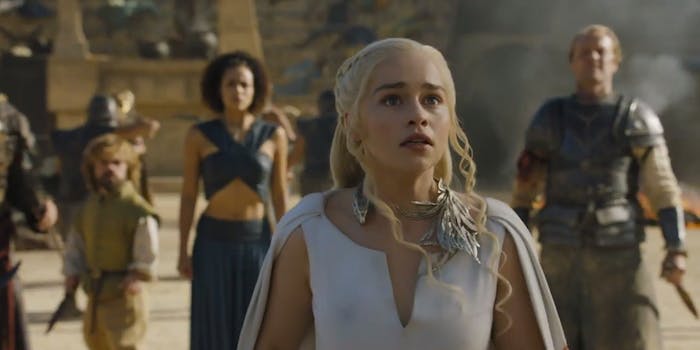 A king might have fallen to a new low in the latest episode of Game of Thrones, but a queen is finally taking flight.

In the final minutes of “The Dance of Dragons,” Daenerys Targaryen barely escapes with her life after the Sons of the Harpy stage a revolt. As she flies away on the back of her teenage dragon Drogon, the scene looks almost exactly how we imagined it when reading A Dance With Dragons. There’s just one difference: the HBO show’s flight with Drogon looked like something straight out of The Neverending Story.

Fans were thrilled to see the moment play out on screen, but as they instantly took to Twitter to make the inevitable comparison, they saw that they weren’t alone. In fact, plenty of fans saw the connection between Daenerys’ first flight and Atreyu riding Falkor. While danger preceded the queen’s flight, the connection is still valid. And now, thanks to the Internet, there’s a video to prove it.

Like many Game of Thrones fans, we were quick to see the connection between Dany and Atreyu’s dragon rides. While we weren’t the first to make a mashup, our take on her great escape is in HD. Take a look below.

So, does this mean that Jorah is slowly turning into the Rockbiter?