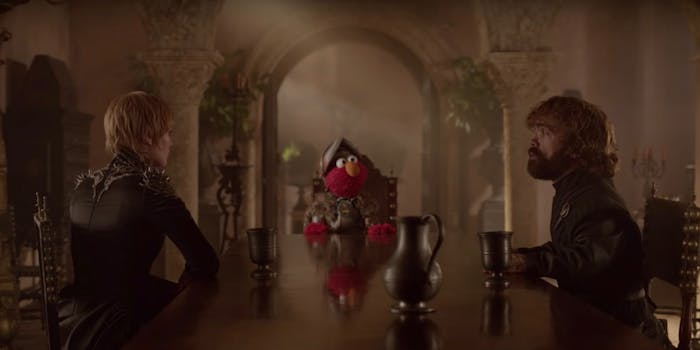 Cersei and Tyrion Lannister learned about respect from Elmo

'Game of Thrones' meets 'Sesame Street' in this important PSA.

In the Game of Thrones season 7 finale, Tyrion Lannister somehow convinced his sister Cersei to send the Lannister army up to Winterfell after she learned that Jon Snow pledged to help Daenerys Targaryen take the Iron Throne. We don’t know how he did it—although there are certainly theories about it—but perhaps we now have an answer.

Sesame Street’s latest mashup brings us back to a tense Tyrion and Cersei conversation with one red and furry new addition to the negotiating table: Elmo, who’s clad in armor with a fur lining on the shoulders and depiction of a yellow rubber duck attached around the collar. He’s got a very important message for Cersei and Tyrion, sworn enemies who’ve hated each other for most of their lives about treating one another with respect.

The PSA is part of the “Respect Brings Us Together” campaign from Sesame Street, which aims to highlight the importance of respecting one another. (Sesame Street, which is also owned by HBO, also released a pretty great Westworld PSA.) Although far more family-friendly than just about every other Tyrion/Cersei verbal smackdown we’ve seen on the show, it balances the two shows well.

Elmo’s efforts are all well and good, of course. He gets Tyrion and Cersei to agree to try to listen. We’re hopeful, but given Cersei’s track record, that hope only goes too far.