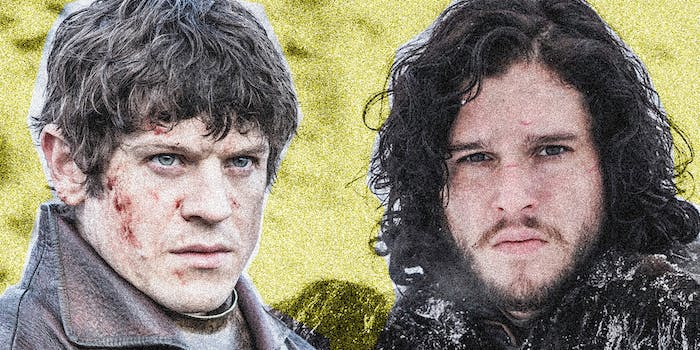 Photo via Game of Thrones/HBO Remix by Jason Reed

The Battle of the Bastards is coming on ‘Game of Thrones’

Two bastards walk onto a battlefield.

Warning: This article contains spoilers and speculation for future Game of Thrones episodes.

A battle is brewing up in the North, and we’ve nearly arrived at the first blows.

HBO this week released the names of the final two Game of Thrones episodes this season after they appeared on HBO’s schedule. Confirming earlier reveals translated from Sky Germany, episode 9 is “Battle of the Bastards” and episode 10 is “The Winds of Winter.” The name of the season finale—which is the same as George R.R. Martin’s next book in the A Song of Ice and Fire series—could mean anything, but the rumble for Winterfell is already building hype with fans. Our suspicious were confirmed Sunday night with the episode 9 preview.

The ninth episode of every Game of Thrones season to date has more than delivered. They can be devastating—Ned Stark’s death, the Red Wedding, and Shireen Baratheon’s sacrifice were all ninth episodes. They’ve also depicted battles of epic proportions, like season 2’s Battle of the Blackwater or season 4’s Battle of Castle Black. On the surface, “Battle of the Bastards” will likely fall in line with an epic battle more than soul-crushing death, but we’re not ruling out the latter just yet.

“It’s definitely the biggest [action sequence yet],” Game of Thrones writer-producer Bryan Cogman told Entertainment Weekly of the then-unnamed battle in March. “We’ve always wanted to get to a place—story-wise and budget-wise and time-wise and resource-wise—where we would be able to do a proper battle, with one army on one side, one army on another side.”

The name “Battle of the Bastards” first appeared in fandom from initial set reports, although some have referred to it as “BastardBowl” in part to callback to often theorized Cleganebowl. Either way, it has a lot to live up to.

We have yet to see an official episode description and we don’t yet know if the upcoming Battle of the Bastards will take up the whole thing—like with “Blackwater” and “Watchers on the Wall”—or just be a significant part of it such as season 5’s “Hardhome.” But the battle (and its ultimate outcome) will have a crucial effect on the real war, as Davos Seaworth told Lyanna Mormont: the one between the living and the dead.

But first, the fight for the North. 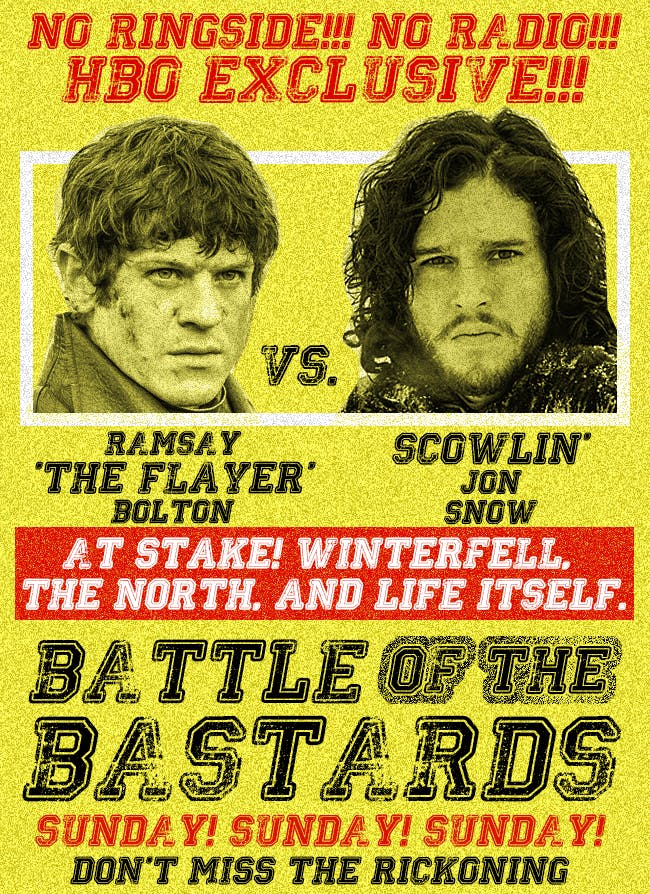 A tale of two bastards

Westeros is full of bastards of all shapes and sizes—there’s even one sitting on the Iron Throne right now—but the titular bastards in the Battle of the Bastards are easy enough to identify: Jon Snow and Ramsay Bolton. They couldn’t be more different from each other, but they both have worn one of the lowest shrouds you can in Westeros, that of a bastard. And while they’ve never met, they have every reason to want to kill each other. 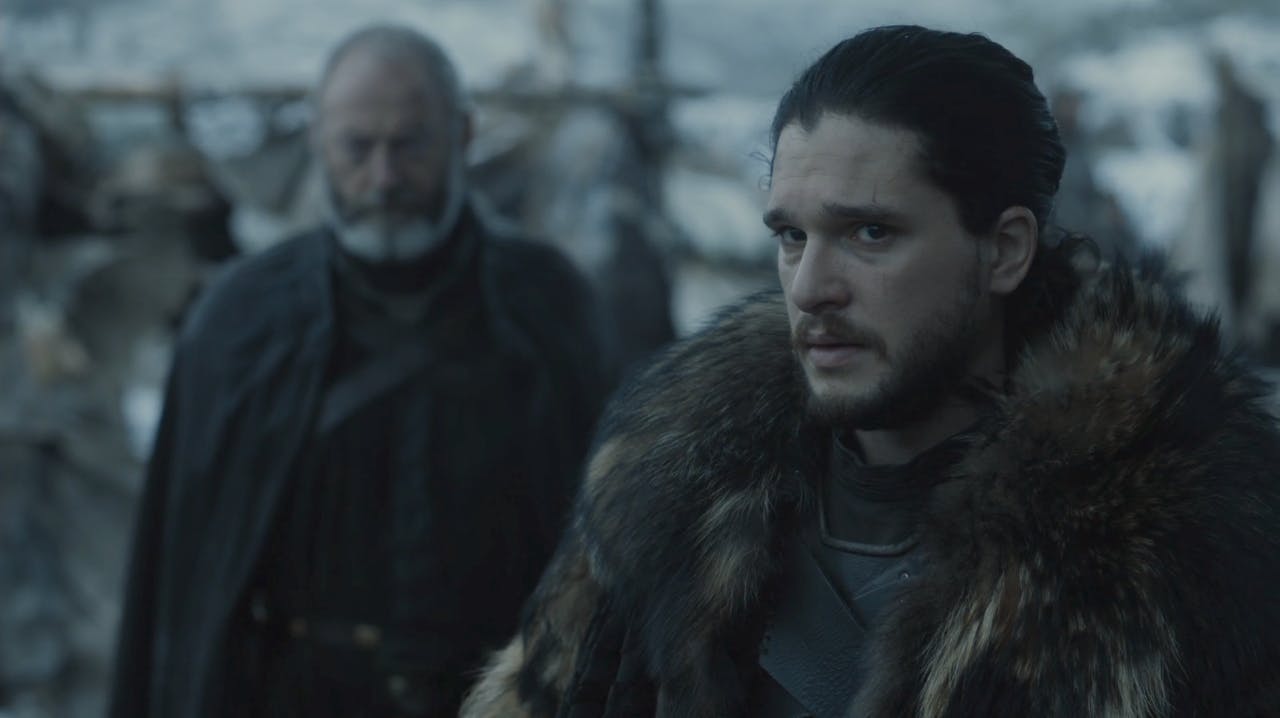 According to public knowledge in Westeros, Jon is the product of Ned being unfaithful to his wife Catelyn while away at war, although the belief that Jon’s parents are Rhaegar Targaryen and Lyanna Stark, also known as R+L=J, is one of the most popular and best known fan theories Game of Thrones has to offer. He was raised alongside his Stark siblings, although he sometimes felt alienated due to his bastard status before joining the Night’s Watch.

Jon has made enemies, but he’s respected by many of his brothers and wildlings alike. He became the Lord Commander by popular vote and elected to let the wildlings pass through the gates before he’s killed in a mutiny by a faction of the Night’s Watch. 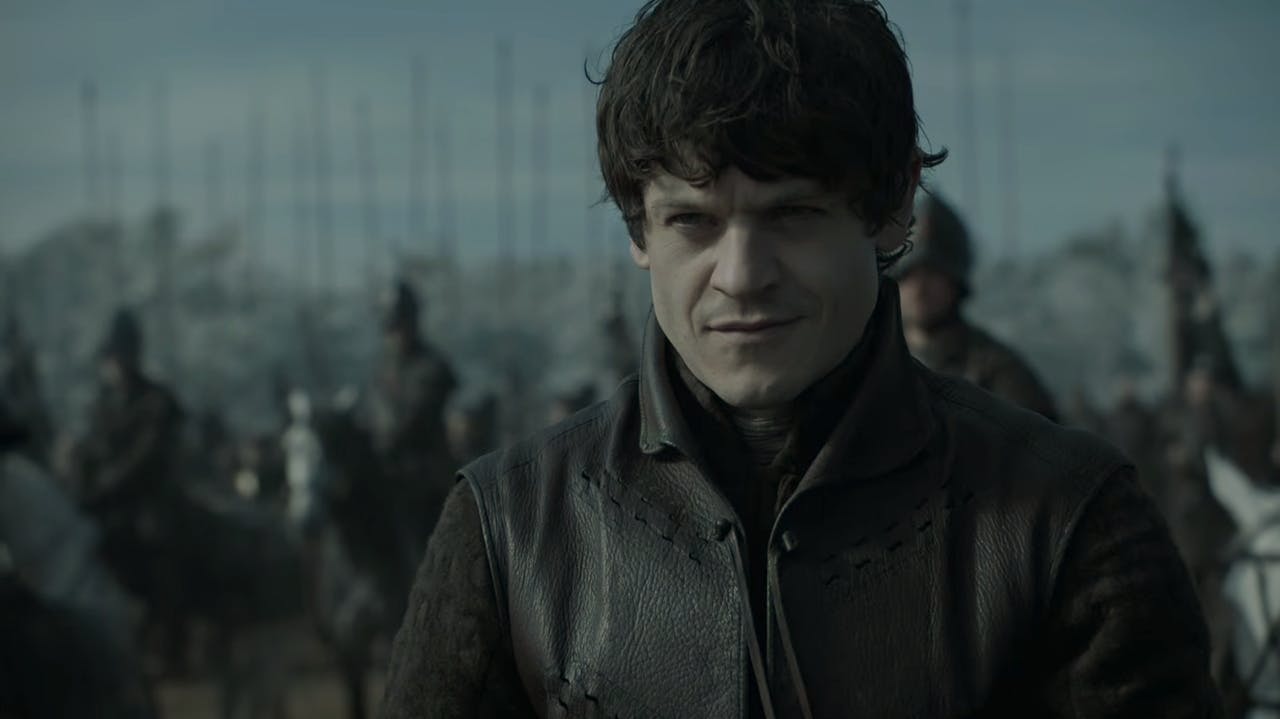 Ramsay on the other hand, was conceived when Roose Bolton raped a woman for marrying a miller without Roose’s consent beneath the tree where he had hanged her new husband. Ramsay’s mother came to visit Roose a year later with a baby in her arms. Roose could tell the boy was his son and let him live.

Indeed, Ramsay is a Bolton through and through. He’s manipulative and cruel, he has openly tortured and flayed his enemies (including removing Theon Greyjoy’s penis), raped and beat Sansa Stark, and he’s not below kin-slaying. He may have been legitimized by Tommen Baratheon, but the moniker of “bastard” still haunts him; Sansa reminding him of his former status is one of the few times someone’s gotten to him.

Now Ramsay is the lord of Winterfell, which was given to the Boltons after the Red Wedding, while Jon abandoned the Night’s Watch after executing the men who killed him. They both have men willing to fight for them.

There will be a “Rickoning”

Looking back, the matchup between the Starks and the Boltons seemed inevitable. Their rivalry dates back to just after the Long Night, according to The World of Ice and Fire, and since Game of Thrones began, the Boltons betrayed the Starks at the Red Wedding (Roose killed Robb himself), Ramsay raped, beat, and tortured Sansa, and they’renow holding the last legitimate male Stark south of the Wall as prisoner.

Any of those grievances are enough for the Starks to want revenge, but it’s the last one that’s led brought them to where they are now.

In “Book of the Stranger,” shortly after the happy Stark reunion we’ve been waiting for, Jon receives a strongly worded letter from Winterfell. The letter is crass and a little repetitive, but Ramsay’s demands are clear. He’s holding Rickon hostage and he wants Sansa back. If he doesn’t get her back he’ll kill every single person under Jon’s protection, feed Rickon to his dogs, and force Jon to watch as all of his men rape Sansa before killing him too.

Any hesitation Jon, still newly risen, had about going to war once again after a lifetime of fighting and death was gone. Now it was personal.

The Stark side may have more people we know and care about—Jon, Sansa, Davos, Melisandre, Tormund Giantsbane, and new fan favorite Lyanna Mormont to name a few—but that matters little when the Boltons have more men.

When Ramsay proposes marching to Castle Black and murdering Jon (not knowing Alliser Thorne got to him first), Roose dismisses him because that’s essentially crazy talk. But, as Ramsay points out, they have the forces of the Karstarks, the Umbers, and the Manderlys behind them, and that’s more men than the rest of the Northern forces combined. And they have control of the North; according to Sansa, Ramsay has about 5,000 men who were prepared to march on Stannis.

Meanwhile, Tormund figures he has about 2,000 (and a giant) who could march and fight, which isn’t nearly enough to match Ramsay’s numbers, and Brienne of Tarth is sent to Riverrun to try and recruit Sansa’s great-uncle Brynden “Blackfish” Tully for aid.

They need more men, which leads to Jon and Sansa’s trek to parlay with the Northern lords. Jon and Sansa may have the Mormonts (and their 62 men) on their side, but in some cases like the Glovers, Robb’s follies have run too deep for them.

And of course, Melisandre, who believes Jon is the Prince That Was Promised and saw “the great victory in the flames,” will follow Jon to the end.

But more men may come in the form of the knights of the Vale. Littlefinger offered them at one point to Sansa, who refused after he left her with Ramsay, but according to the analyzation of the letter she wrote in “The Broken Man,” she might try to get them back.

Winter is coming—and the dead with it

We’ll have to wait until “Battle of the Bastards” airs to see how it truly plays out, but given the size and scope of the battle it was impossible for Game of Thrones film it without some details getting out.

The biggest one? Easily Kit Harington in Stark colors on-set in Belfast seven months before the show revealed his resurrection; a shot of what appeared to be Jon in the first trailer also fueled that speculation.

The set reports revealed some of the players involved and even more evidence of Ramsay’s cruelty: the burning, flayed men shown in the trailer looks to occur around the Battle of the Bastards.

Ramsay needs to die; that’s not really up for debate. But will he?

We don’t have the answer to that just yet. What’s more likely is some of the people we know and love will die. Jon, as the subject of a giant prophecy who has a red priestess by his side, is probably safe—and he probably didn’t come back just to die so soon at Winterfell (although we could be wrong). Sansa hasn’t been shown fighting just yet so she might be on the sidelines or stay at the camp. Everyone else? Good luck.

And while Ramsay has his men and cruelty, Jon’s got destiny (and hopefully six seasons of reasons to avenge the Starks) on his side.

“I saw him in the flames, fighting at Winterfell,” Melisandre, deep in her crisis of faith, said of Jon before she resurrected him. An episode later, she called it “the great victory.”

We sure hope she’s right.