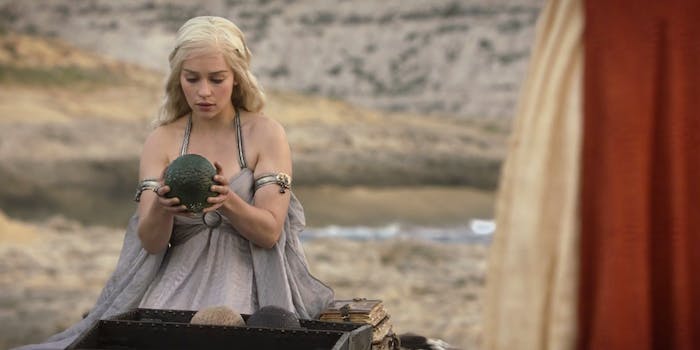 Someone figured out how often rape occurs in ‘Game of Thrones’

The results are staggering no matter how you look at them.

In the aftermath of the controversy surrounding Sansa Stark’s marriage to Ramsay Bolton on Game of Thrones, fans have complained loudly about how the show deals with violence against women. But does the show feature rape more often than the books it’s based on?

It’s a criticism the showrunners have gotten since the show began. As of the latest episode, “The Gift,” numerous major female characters have been the victims of rape or attempted rape, including Sansa, Cersei Lannister, Daenerys Targaryen, Meera Reed, and most recently the wildling Gilly.

When someone suggested to Tumblr user Tafkar that the show leaned more heavily on rape than the books, she looked back at A Song of Ice and Fire and Game of Thrones to see whether the claim had any merit.

Here are her findings:

Tafkar’s blog post goes into more detail about the gruesome scenes of rape and attempted rape, to the point where it may even shock book fans who have read and interpreted George R.R. Martin’s novels. Readers may remember the major scenes such as Ramsay’s wedding to Jeyne Poole, but they might forget all of Gregor Clegane’s exploits, including the gang rape of a 13-year-old girl after the Tourney of the Hand; what Ramsay did to Lady Donella Hornwood; and even the instances of marital rape involving Jeyne, Cersei, and Daenerys, something that wasn’t seen as a crime until the late 1970s.

In some cases, people simply forgot about those scenes from the books. In other cases, they experience it more acutely on TV. It depends on the person. Either way, io9’s Charlie Jane Anders found herself wondering why people see the TV show as more sexually violent than the books.

As Tafkar says, it’s not an exact science. In scenes that featured group rapes and scenes that didn’t give a number of victims, she rounded the number to 10, though she admitted it could be higher. Her numbers from ASOIAF are only from the first five books and don’t include any chapters from The Winds of Winter, with two more as-yet-unpublished books that will likely feature even more rape and attempted-rape scenes.

In almost every instance of rape or attempted rape, the experience is shown from a man’s perspective. Most of the time, the story is told by viewpoint characters who are rapists: Theon is ordered by Ramsay to participate in the rape of Jeyne, Cersei forces herself on Taena Merryweather, and Tyrion rapes a slave girl who doesn’t even get a name. Oftentimes, the rape is meant to advance a male character’s storyline.

“George R. R. Martin uses nameless women’s bodies as character development for male antagonists in A Song of Ice and Fire,” Tafkar wrote in a follow-up post. “Rape victims serve as props and set decoration to illustrate a man’s depravity. Social class does not protect them. The only raped women who tell us their tales, either directly through inner monologue or by telling their story to another character, are villains.”

The only two women who get to tell their story? Mirri Maz Duur and Cersei. They both get revenge on their rapists—Mirri Maz Duur effectively kills Khal Drogo and makes Daenerys lose her baby, while Cersei gets Robert Baratheon gored by a boar.

Martin has long defended including rape and sexual violence in ASOIAF. He has said that rape was a part of history, and that, as much fantasy as there is in his books, they are ultimately rooted in historical events.

“Rape and sexual violence have been a part of every war ever fought, from the ancient Sumerians to our present day,” he told the New York Times last May. “To omit them from a narrative centered on war and power would have been fundamentally false and dishonest, and would have undermined one of the themes of the book: that the true horrors of human history derive not from orcs and Dark Lords, but from ourselves.”