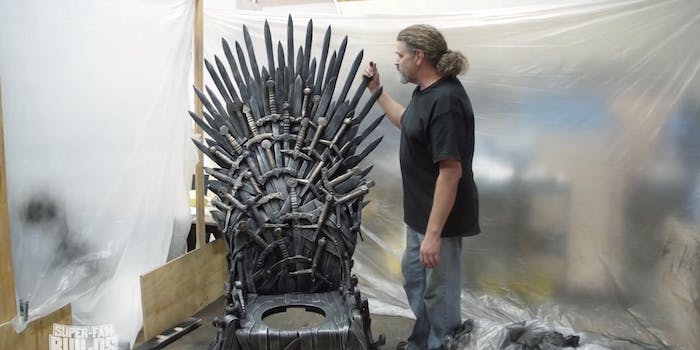 Someone finally built a ‘Game of Thrones’-inspired toilet

Now you can rule Westeros from the water closet.

From shredded carrots to sex toys, Game of Thrones fans never fail to find new ways to interrupt the Iron Throne. But not all versions on the show’s famous seat are so brilliant. Some, like this Super-Fan Builds version, are downright crappy.

So where did the idea for an Iron Throne toilet come from you ask? The creation of this awesome chair is all thanks to the mind of Chloe Dykstra. Dykstra got in touch with the folks over at Super-Fan Builds to see if they could outfit the water closet of her friend John Giovanazzi with the finest seat in all of Westeros.

Thanks to the expertise of Tim Baker Studios, the Iron Throne soon found its way from the Great Hall to Glendale, Calif., where it was promptly installed in the bathroom of Giovannazi’s bar. Surprisingly the whole thing was forged without dragons’s breathe.