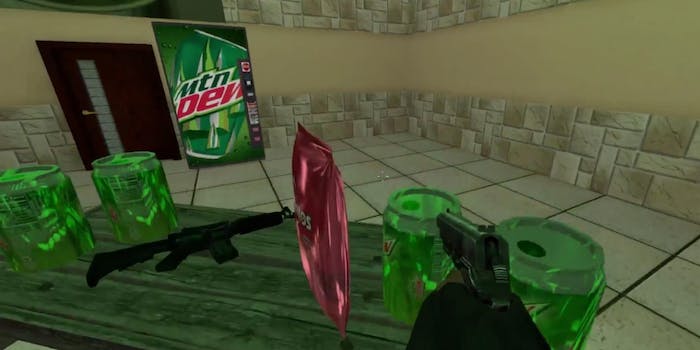 The results of the 7DFPS game jam are hilarious.

Ultra-conservative politicians and social critics wish they could take down violent, first-person shooters this harshly. To really accomplish the goal, you need a gamer.

Game Of The Year: 420BLAZEIT is a first-person satire that takes on the disposable, consumer-centric nature of the triple-A game industry, the terrible behavior of young first-person shooter players online, and the inherent silliness of the entire FPS genre. It’s a product of this year’s 7DFPS, a game jam organized by Jan Willem Nijman of the Dutch indie studio Vlambeer, which challenges participants to design a first-person shooter game in only seven days.

This game is so insane that when we first saw the YouTube video, we didn’t believe it was actually a game you could play. Game Of The Year: 420BLAZEIT is featured on the 7DFPS website, however, and we found a video of popular YouTube gamer PewDiePie giving it a go.

You may want to turn down your volume before you watch the video. Skip ahead to 5:12 to see a run that is slowed down to show you all the different mechanics at play in Game Of The Year: 420BLAZEIT. Then start the video over again to watch a playthrough at full speed, and you’ll have a better idea what the hell is going on.

You might think about Mountain Dew when it comes to gaming because the high caffeine and sugar levels have long been a standard fuel for competitive first-person shooter players. In fact, Mountain Dew has for the past few years offered a limited-edition version of its product called Game Fuel, which has even higher levels of caffeine than the standard version.

Doritos and Mountain Dew were also involved in a controversy when Geoff Keighley, host and producer of some of the biggest video game journalism shows and productions on video, appeared in late 2012 in a segment flanked by bottles of Mountain Dew and a bag of Doritos. The video was part of a promotion for Halo 4. And some people didn’t like the fact that a journalist was appearing in such a blatant product advertisement.

It sparked what became known (chillingly, in light of recent events) as Doritosgate, and inspired some intense conversations about tight relationships between video game journalists and game publishers and whether game journalists existing as an unofficial club led to bland, lockstep coverage (issues you may recognize, also in light of recent events).

Game Of The Year: 420BLAZEIT is obviously a call back to this conversation. It also takes aim at the terrible behavior of some young FPS gamers online, demonstrated by some of the vile messages plastered all over the screen. Notice that the messages are triggered when the player makes a kill.

The game’s title itself refers to the relationship between marijuana use and gaming. It’s often taken for granted by casual observers that gamers are potheads. It’s a charge that’s difficult to dismiss, if you spend just a few hours playing any online FPS game. Note all the login names with references to 420, bong hits, blazing, and weed. You’ll find it all in Halo and Call of Duty lobbies.

There’s even a reference to MLG, or Major League Gaming, which hosts professional first-person shooter events and doles out some hefty prize purses. MLG is so influential that Halo lobbies set up to reflect MLG rules have become commonplace. There are also cultural references like the dog from the Nintendo Entertainment System game Duck Hunt, and a golden AK-47 that’s a reference to GoldenEye 007 on the Nintendo 64.

All this satire is very on the nose. What may be less obvious to casual observers, however, is the way Game Of The Year: 420BLAZEIT mocks FPS design itself. FPS levels usually funnel people down a narrow path, without giving them any room for exploring the environment. The cacophonous nature of FPS sound design practically turns the audio into white noise when so many guns and explosions are going off.

Considering this game jam is supposed to inspire unique and strange experimentation, Game Of The Year: 420BLAZEIT is a strong argument for why it’s worth paying attention to.