Meet Erica the game developer, Tumblr's ghost in the machine.

Erica seems like a nice enough girl, albeit kind of demanding for someone you’ve never met. In her first Tumblr message, she calls you “darling” and asks you to test her new video game, barely pausing to ask how you’re doing. (She’s a game developer, by the way. Erica the Game Developer.)

Except, of course, Erica isn’t real, and neither is her game. Anyone with an ounce of Internet savvy can tell that Erica is a spambot, and she just wants you to download a virus.

Tumblr is relatively good at discouraging spam messages, but a handful manage to make it through. And for some reason, Erica is the most persistent. Armed with a legion of disposable accounts, she circumvents Tumblr’s maximum message policy and worms her way into thousands of inboxes. Over the past few months, she’s developed into something of an urban legend. In the end, Erica comes for us all. 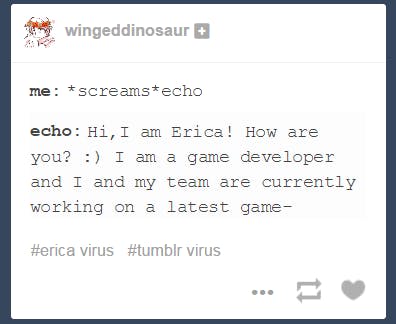 Thanks to her ubiquity, Erica became a meme. There are audio recordings of her messages, at least one fake social networking profile (complete with Erica’s instantly recognizable userpic, which is actually a photo of a real game designer named Alicia Crawford), and an increasing number of parody posts. Erica also provides a handy solution to other annoying messages on the site: simply paste the Erica Message into your reply, and post. 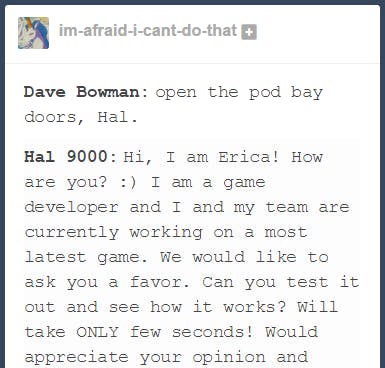 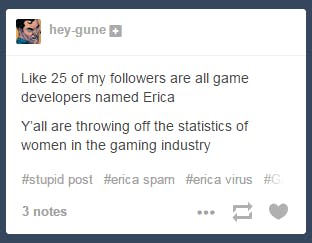 The Erica virus recently branched out into using other names, but it doesn’t seem to be fooling anyone. Spambots with names like Lori and Clarise showed up with similar messages, and were quickly written into the Erica mythos as her sisters or cousins. Honestly, the fact that Erica is the best known Tumblr spambot is pretty encouraging for Tumblr itself. For all its faults, the site is pretty good at avoiding spam. Erica can spawn as many new accounts as she wants, but there’s still no way to embed a link into a Tumblr askbox message, and there’s still a limit to the number of messages they can send each day. Plus, even though Erica’s creators chose a seemingly Tumblr-friendly avatar (a cheerful female game developer who just wants some feedback on her game), very few people are falling for the ruse. It may feel like Erica is everywhere right now, but in the end she’s fighting a losing battle. 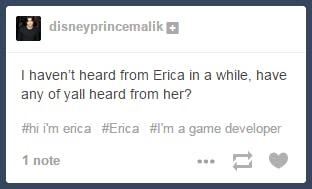 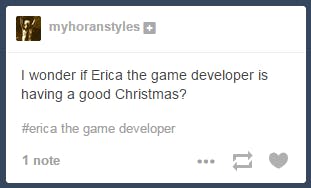 It’s only a matter of time before she fades into legend.