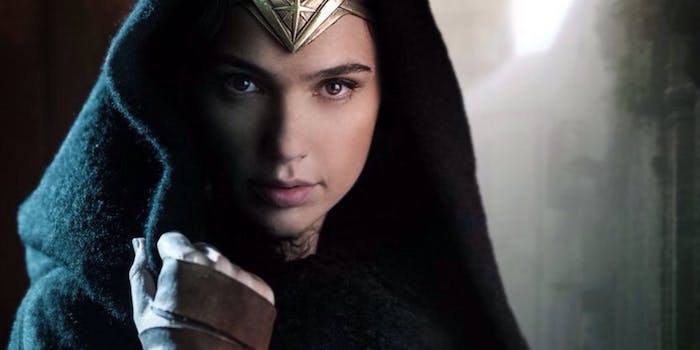 She's ready to take on the world.

Gal Gadot, the star of Wonder Woman, has marked the beginning of principal photography by giving fans a look at the first female superhero to get her own film.

On Saturday, she posted the photo to Twitter, and acknowledged how long it took for this day to come. It shows Wonder Woman standing near what appears to be Big Ben in London, and we see only a small peek of her iconic costume, but we’ve already seen the costume Diana dons after it debuted last year at San Diego Comic-Con and appeared in the most recent Batman v Superman trailer. Diana looks ready to take on anything that comes at her.

Almost 75 years in the making… #WonderWoman is underway. pic.twitter.com/jCa0qRzuW8

Set photos have also given us our first look at Chris Pine, who will play Wonder Woman’s love interest, Captain Steve Trevor.

Chris Pine on the set of #WonderWoman! It's finally happening…. pic.twitter.com/J7bmjYbT4m

Although Pine’s casting was rumored for some time, Warner Bros. recently confirmed it with its announcement that production of Wonder Woman has begun. Also joining the cast are Robin Wright, David Thewlis, Danny Huston, Elena Anaya, Ewen Bremner, and Lucy Davis, but none of their roles were provided. The casting confirmation also said nothing about recent news that Nicole Kidman was cast an Amazonian warrior. Patty Jenkins will direct.

The Wonder Woman film was first announced more than a year ago, but even that doesn’t always guarantee a film will get made. With Marvel’s Captain Marvel movie being pushed back until 2019, the news of principal photography starting is a great reassurance for fans that this film is finally happening.

We're finally getting a #WonderWoman movie! It's legit happening this time! 😭 pic.twitter.com/WHhWaG6JqR