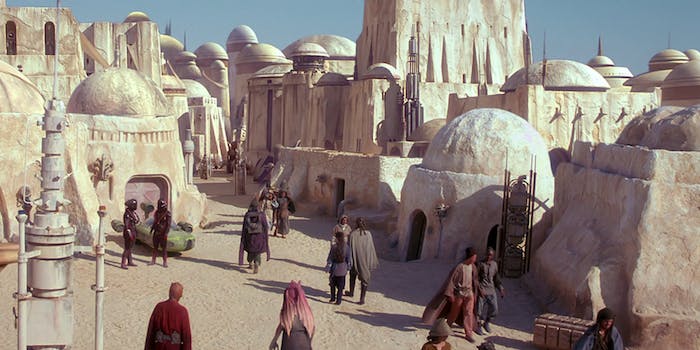 Fund, or do not fund. There is no try.

Tatooine’s iconic city of Mos Espa has survived pretty well in the years since Star Wars was filmed, but now it’s under threat of being engulfed by shifting sand dunes.

Mos Espa’s real-world location is in Tunisia and shares its space with the Ong Jmel-Nefta heritage site, making it a tourist attraction for Star Wars fans and regular tourists alike. Sadly, the nearby sand dunes are shifting so fast that this geek culture pilgrimage site may not be around for much longer.

Inspired by a successful fundraising drive to save Luke Skywalker’s home back in 2012, there’s now an Indiegogo campaign to rescue Mos Espa from being swallowed, Sarlacc-like, by the desert. The goal is $45,000, supplemented by the Tunisian government, with Indiegogo backers being given the title of Padawan, Jedi, or Master Jedi if they go so far as to donate $1,000.

The donation drive hasn’t got very far as of yet, but with Star Wars Day coming up on May 4 and a new movie on the horizon, they might just make it. After all, how often do you get the opportunity to visit an alien planet?