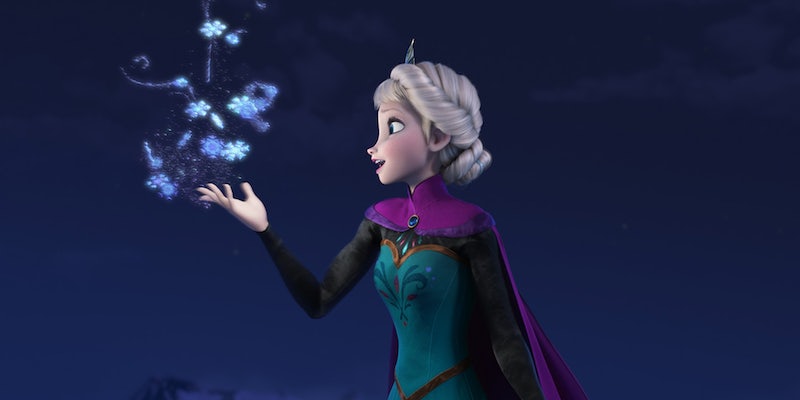 How Disney turned ‘Frozen’ into a snowy wonderland

Every snowflake is truly unique. And due to the alternatively solid and fluid-like properties of snow, animating it requires attention to very fine details.

You wouldn’t know it from watching Frozen on the big screen. It’s an animated classic that’s captured the imaginations of fans of all ages. Perhaps its greatest accomplishment, though, is its breathtaking portrayal of snow, creating a world viewers can retreat into. The feat required a fresh kind of collaboration between both the effects and creative teams at Disney.

The smashing, falling, and crumpling of snow in Frozen was achieved by an advanced simulator the effects team called “Matterhorn.” It works by taking a particle, like a snowflake, and creating parameters of how that it behaves, or rather, how it moves. A typical snowball is made up of millions of particles. To create realistic movements, like a collision or, for example, Princess Anna trudging through the snowstorm, a powerful computer takes into account each particle’s mass, density, and velocity, and then sends it flying. Meanwhile, this information is mapped on a grid that evaluates the logistics of moving in that grid square—important when you’re dealing with a solid like snow.

Matterhorn’s designers were tasked with starting at a place of simulated reality, which they could then makes changes to in order to suit the style of the film. The technology behind Matterhorn’s actually based off of a sophisticated simulator 20 years in the making, called MPM, or the Material Point Method.

This technology has a long history, starting at the University of New Mexico and slowly being adopted worldwide as a method of simulating destructive collisions. Initially, its purpose was to simulate impacts to gain information about potential building materials in case of explosions or blasts. For MPM, the researchers refined two older methods, the exotically named Eulerian, the grid form; and Lagrandian method, which calculates particle movement.

Joseph Teran is an associate professor in Applied Mathematics at the University of California, Los Angeles, and acted as an advisor for Disney as it was tailoring Matterhorn for Frozen.

“Snow is a finite collection of particles, so you can move these along on various trajectories,” he said, explaining why MPM is an ideal tool for creating snow. “Behind that, though, there is a background grid which computes [how these particles will move in relation to one another].”

Teran said that it’s actually the problems with MPM that make it very suitable for simulating snow. Back in the ‘60s when this technology was in its early stages, it was being used to simulate water (“fluid dynamics”). However, making the leap from liquid to solid is not as straight-forward as say, popping water into the freezer. The method hasn’t been perfected yet, but “it’s the numerical errors which actually represent how snow behaves.” Thankfully, snow does act a little bit like a liquid; it’s what the researchers call “plastic,” just like their model.

For Disney’s purposes, the team created a “user controllable elasto-plastic constitutive model”—a combination of the Eulerian grid and the Lagrangian particles to make the snow act in this “plastic” manner that looks more realistic. 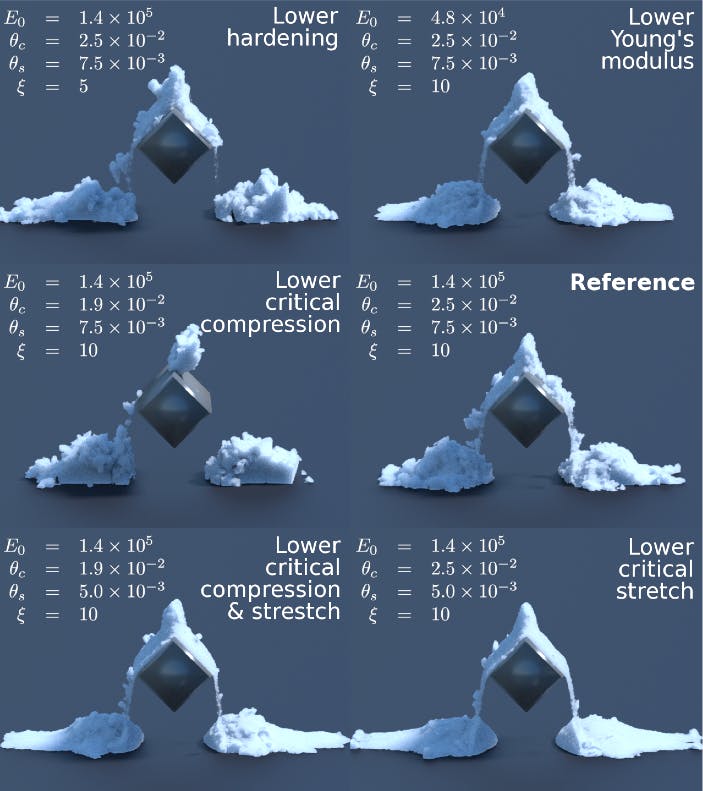 These parameters can be adjusted to be powdery, chunky, or icy by changing the parameters for each particle. In the image above, all blocks hit the metal bar at the same speed, but how dense they are makes all the difference to what happens.

It also shows how this technology can take two different objects, like snow and metal, and simulate how they interact. It was important in the film that the simulated snow should be able to interact with other objects. For example, the team had to think how hard it would be Anna’s feet to penetrate the snow as she climbed the mountain in search of Elsa. 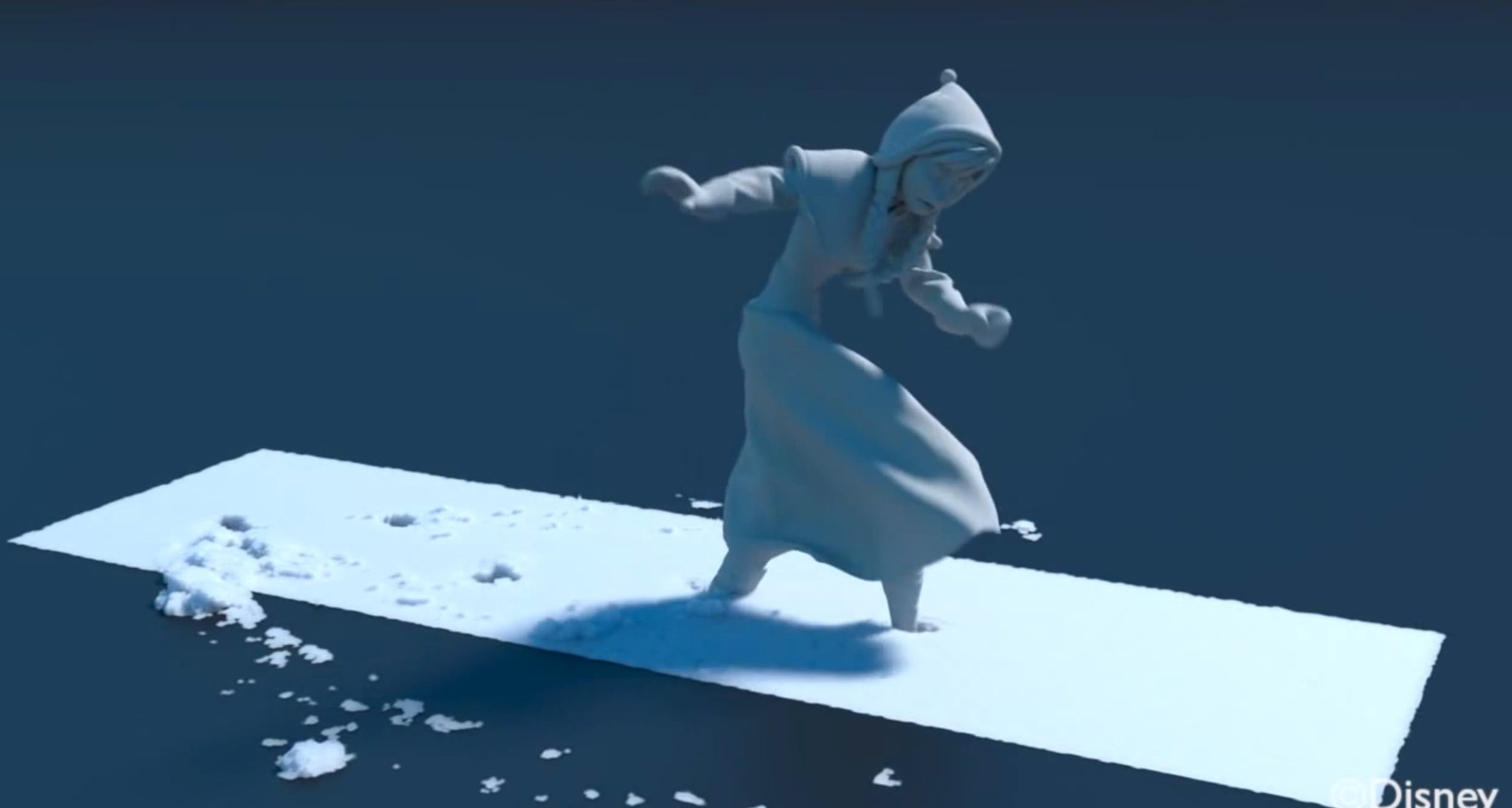 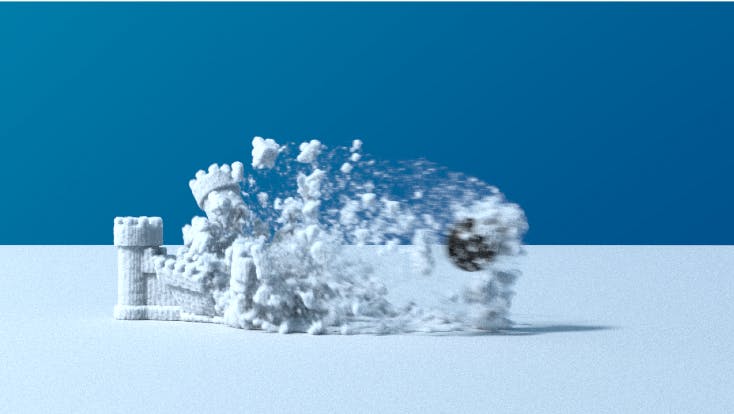 Breaking down such scenarios was essential to making a realistic snowscape. Even with an effects crew of more than 40 people, doing so wasn’t easy. They had to develop a visual glossary of all the different types of snow (powdery, icy, etc.) and calibrate each to simulate the unique interplay of characters and effects, as in the picture above.

That was particularly true for the Ice Sorceress Elsa, whose magic is a combination of snow and ice manipulation. The researchers had to make it visually apparent that her work was not only different from the natural snow around her but also representative of her emotional situation. To do so, they actually relied on a far less technical strategy, one that started with pencil and paper.

“Every week there was some discussion about combinations of Elsa’s magic or how her performance would affect an effect,” said Dale Mayeda, one of the effects supervisors on the project, speaking to CGMeetup.

“For Elsa’s magic,” Marlon West, another of the supervisors, explained, “there was a lot of hand-drawn exploration, that our 2-D animator Dan Lund did, and our directors really liked that look.” The end result: the elegant spirals and crystalline shapes seen at many points in the film. 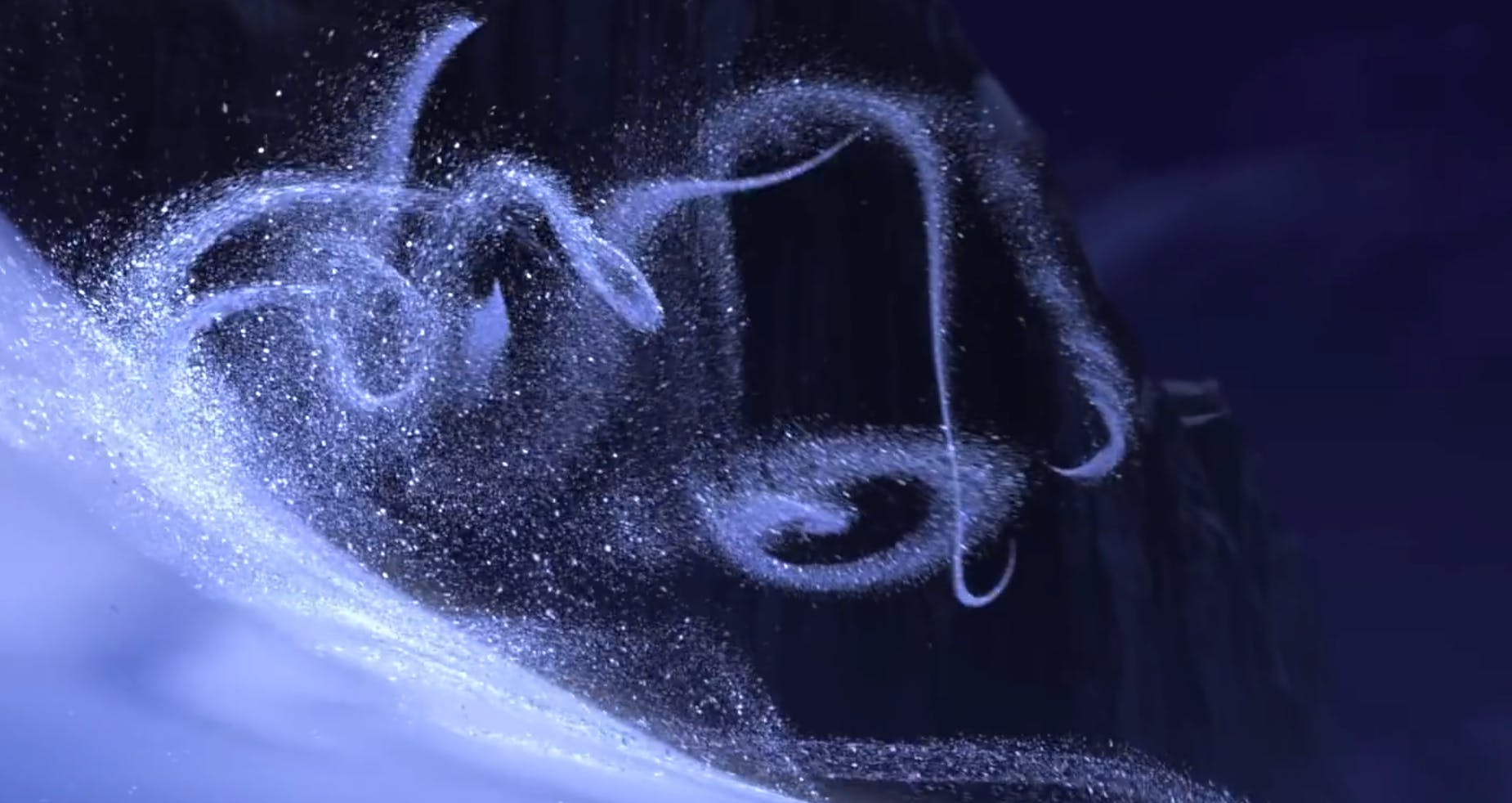 Moving these effects into computer-generated imagery (CGI) was difficult. It had to have artistic flair and follow along with the wintry style of the film. Designing the magic so it was believable, Mayeda said, was crucial. Once they felt they had created a sense of both power and elegance, they incorporated elements of Norwegian traditional design to bring it closer to its setting.

“As far as effects animation,” Mayeda summarized, “it’s definitely a combination of art and science.”

Similar to the detail and thought that went behind Merida’s hair in Pixar’s Brave, Frozen shows that amazing CGI is a fusion of art, mathematics, physics, and raw computational power. The effects team’s challenge was to bring a snowstorm to life, one snowflake at a time.

Technology like MPM is what marks the line in realism between hand-drawn and CGI film. One relies on being stylistic to create an effect, as in Elsa’s magic, while the other can use cutting-edge technology to realistically render aspects of our world. The result raises the bar for future animations—and the expectations of their audiences.