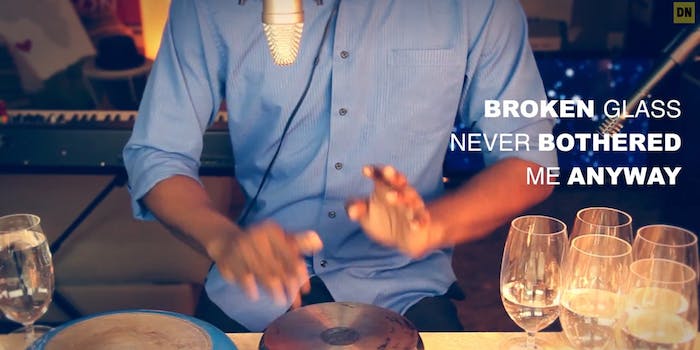 What's the best way to cover a song about learning to (literally) chill? With ice water and breaking glass, of course.

It’s “Let It Go” like you’ve never heard it bef—no, wait, stop, where are you going?

All right, we know you’re a little sick of the Internet dishing up amazing renditions of the hit theme song from Frozen, but just hear us out.

We’ve heard hundreds of covers “Let It Go,” but now we realize that all the other versions of this song about learning to cool off and chill out lacked the most crucial element of all: actual ice water.

Dan Newbie and his “musical glasses” are a recent YouTube sensation. After his first video, a cover of Pharell Williams’ “Happy,” did well on YouTube, Newbie tuned the xylophone-like quality of his collection of wine glasses—not to mention a few pots, pans, and bags of salt—to the Frozen hit. Between the tinkling crystal and the televised snow in the background, we practically need mittens.

The best part? At 1:55, one of Newbie’s wine glasses accidentally crashes to the floor, landing exactly on the up-beat. The only effect more perfect would have been an actual avalanche.

Newbie’s new fans are already clamoring for a new cover. Some have suggested the string-heavy theme from Game of Thrones, in total contrast to the sparkling tone of his musical glasses.

As for us, we’re begging him to do the entire Frozen soundtrack.