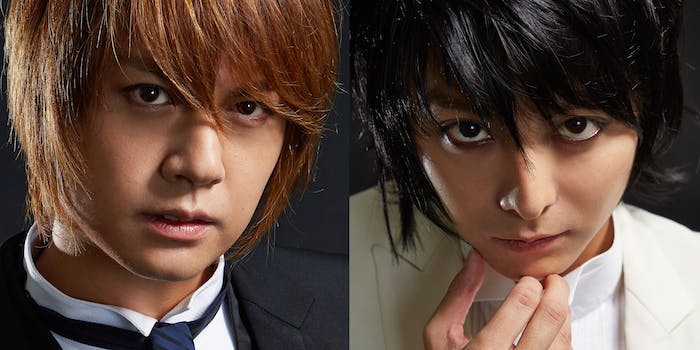 The ‘Death Note’ musical promises to be a veritable train wreck

'Death Note' fans wanted new material for their fandom. Be careful what you wish for.

The Death Note musical is here, and even though it’s just a practice sequence of numbers from the show, we’re already enthralled by the train wreck of melodrama and schmaltz in our future.

If we could pick one composer we’d love/hate to turn hit anime Death Note into a musical, it would be pop hit songwriter turned Broadway composer Frank Wildhorn. Wildhorn is best known for the inexplicably popular Jekyll and Hyde and its overblown, ready-for-Billboard musical numbers, which one critic accurately summarized as “music to (figure) skate by.” Wildhorn’s insistence on writing easy pop hits into his shows sadly predicted musical theater’s demise into an endless parade of popular revues, variety shows, and musicalizations of already-proven films and Disney musicals.

But oddly enough, Wildhorn’s over-the-top poppery might be an unexpectedly perfect match for Death Note. The mega-popular manga/anime series by writer Tsugumi Ohba and artist Takeshi Obata focuses on a bored, overachieving high school student, Light Yagami, who falls under the sway of a supernatural reaping tool. With unlimited power to kill at will, Light rapidly gives in to his inner megalomaniacal sadist. He proceeds to go totally off the rails for the rest of the series, in a transformation that might actually warrant a sweeping Wildhorn musical number. Or five.

At the very least we should at least get a few sweeping love/hate scenes between Light and his nemesis, quirky detective L, right? Right???

Much like Wildhorn’s Jekyll and Hyde, the Japanese production features two actors, Kenji Urai and Hayato Kakizawa, playing Light and his transformed alter ego “Kira,” the god of death Light fashions himself into once he has the note. In the eight-minute video shared on YouTube, we see both Light and Kira, as well as L (Teppei Koike) and the entire ensemble, performing a selection of songs from the show.

The musical’s production company also briefly released a number of English-language demos for the songs in January, presumably for the show’s eventual New York tryout. They’ve since been deleted from the musical’s website, but you can still catch them making the rounds on Tumblr. The demos feature a number of Broadway veterans, including Tony nominees Jeremy Jordan and Jerrod Spector as Light and L:

The Japanese production of Death Note will open in Tokyo on April 29 before touring in Osaka and Nagoya. A different cast will premiere the musical in South Korea later this year. Death Note is directed by Tamiya Kuriyama and features music by Frank Wildhorn, lyrics by Jack Murphy, and book by Ivan Menchell.