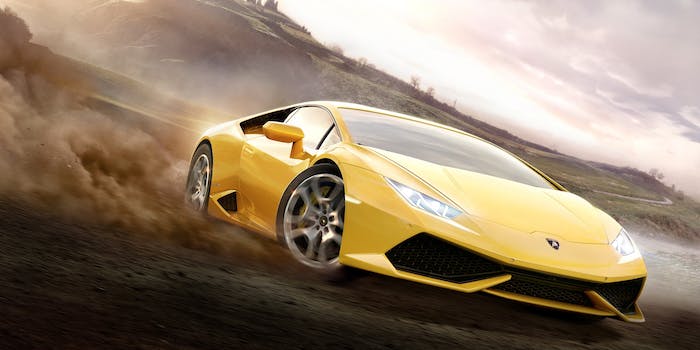 To drive or to race: Forza Horizon 2 offers both

Forza Horizon 2 is the most accessible driving game in recent memory.

Driving enthusiast Yu Suzuki has stated that his landmark arcade racer, Out Run should be classified as a driving game, not a racing game.

It’s rare to find such titles today where soaking in the open road is more important than placing first. Playground Games is an ambitious studio for wanting Forza Horizon 2 to be both.

Very few releases live up to the marketing-speak and promise of “play as you like.” It worked for Splinter Cell: Blacklist, which rewarded you equally for being an out-in-the-open killer or a stealthy phantom. In racing games, switching between simulation and arcade-style controls is often as easy as toggling switches on an option screen.

Like a sincere-sounding, no-pressure salesman, Forza Horizon 2 easily communicates this open-end approach right from the start. As with the previous game, there’s a thematic hub in the form of a music festival, aptly named the Horizon Festival. While it adds personality and continuity to the series, I am glad that it’s more understated this time around. The festival host—who looks like a sibling of Spike TV’s Geoff Keighley and exudes with charisma of late-90’s Jude Law—kicks off the game with a leisurely road trip, stressing that this drive is just to enjoy the scenery. It’s at the end of the road trip that the player is introduced to actual competitive races. Again, there’s something for everyone. Even though, I don’t prefer cockpit views in racing games, the stress-free design of Forza Horizon 2’s road trips makes the first-person perspective more inviting.

In the way that free-roaming is as enticing as competing in structured races, so too is the accessibility of how you drive. Although the name Forza is often associated with simulation-style driving, not once did this game make me feel like I shouldn’t customize my controls to suit my more arcade-style preferences. All I wanted was to activate the stability control and traction control; turning on auto-breaking would significantly dumb down the experience.

Influenced by the risk-taking incentives of the Burnout series, free roam offers the potential of earning skill points based on daredevil behavior and by simply driving well. It’s a feature that seldom delivers the nitro-induced, pupil-dilating rush of Burnout Paradise—an arcade-style racer that rewards death-defying behavior exponentially—which is just fine for a Forza game.

Those who are able to balance hazardous and sensible driving will yield the highest rewards. That’s because skill points are banked if you haven’t done anything risky for a couple seconds and haven’t hit any cars or objects. The points you manage to bank make up the currency of the game’s Perks system, which offers bonuses such as skill-point multipliers, greater race winnings, and surprisingly enough, multiplayer enhancements. For instance, one perk grants you invisibility for 15 seconds. That’s a lot of time to find a safe hiding place in a minigame where the object is to avoid getting hit by other cars.

Playground Games is presumptive that you won’t tire of the game’s scenic view, assuming most players would be happy to trek half a dozen miles to the next group of competitive races. Yet if you’ve come to Forza Horizon 2 for the races and only the races, you can pay your way to fast travel throughout the map. It’s an unorthodox approach to an otherwise open-world convenience. In this game’s context, it makes sense: If you’re wholly dedicated to racing and its rewards, then you should have the winnings to afford fast travel.

In a contrast to the landlocked Colorado setting of the first Forza Horizon, developer Playground Games wisely moved the Horizon Festival to the southern coast of Europe, where France and Italy meet. The studio’s interpretation of this Mediterranean region includes all the expected creative liberties taken with the map size. Driving from Nice to Castelletto in real life would take two and a half hours; it takes just 10 minutes in Forza Horizon 2.

Despite all the pretty and effective car commercials shot along coastal routes, such scenic drives are often the minority in a given racing game’s roster of tracks. To have seaside roads take up one whole side of Forza Horizon 2’s map is immensely refreshing, echoing the ambitious but ultimately underwhelming island design of Ibiza in Test Drive Unlimited 2. I would jump at the chance to play a future Forza Horizon that emulated the scenic Highway 1 of the California coastline, even if it called for an unusually narrow game map.

Forza Horizon has always felt like a complementary spin-off rather than a foil to Forza Motorsport. Both have abundant race opportunities, but the open world of Forza Horizon offers the obvious freedom to roam beyond the tarmac. That fact that you can do this with any car in your garage should be one of the game’s very few divisive aspects. Areas usually meant for Hummers and Subarus are now accessible to Ferraris and Lamborghinis. Golf courses to vineyards are fair game, so too are steep hillsides, especially if you have a penchant for wicked jumps. It’s an open-world game that some would consider to be too open.

Like the road trips, the host teaches you early to think beyond the pavement and to consider shortcuts on the unbeaten paths. This is further reinforced by the many off-road competitions, which are given structure through checkpoints. It’s a completely different story in off-road free-roaming, where you’re faced with countless split-second judgement calls in a given multiplayer race. The host has marked the goal: Do you stick to the relative safety and familiarity of the highways or risk the unpredictability of hills and fields in the hopes of a more direct route? I’ve often opted for the latter, feeling my pulse quicken as I drive head first into a forest, hoping that I would thread the needle between a few dozen pairs of trees. It’s stimulating stuff, all the more so if you manage to win.

Turn 10 Studios’ Dan Greenawalt has stated that his company did not intend for Forza Motorsport and Forza Horizon to take turns releasing sequels every other year, though he admits it might turn out that way anyway. There’s a lot of benefit to this alternating release schedule, especially if you prefer Motorsport over Horizon or vice versa. There’s comfort knowing that you have at least 24 months to win every championship, find every collectable, and get that multiplayer fix before the next Horizon festival takes you to another part of the world. And while one can appreciate a good binge session from time to time, Forza Horizon 2’s immensely accessible design makes 20-minute sessions just as attractive.