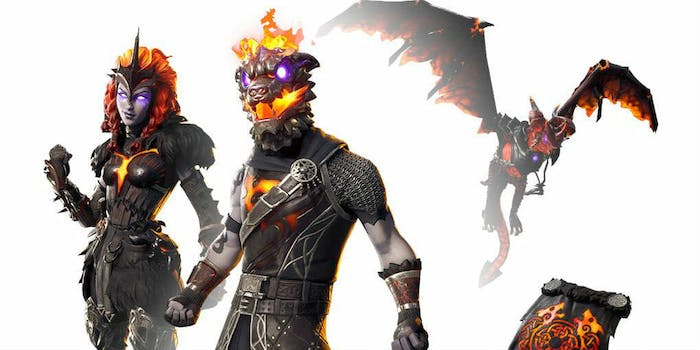 Things are heating up.

We’re well into season 8 of Fortnite, but that won’t stop the leaks from pouring when it comes to upcoming skins and items to battle with. Aside from a new “The Floor is Lava” limited time mode, a leaker has discovered and confirmed a new set called the Lava Legends pack, and it looks like it’ll be a hot item when it releases.

According to Fortnite leaker Lucas7Yoshi, the Lava Legends pack evidently includes a pair of new skins to earn, along with some lava-themed items, all of which are legendary in terms of rarity.

Chief among them is the Molten Battle Hound and Molten Valkyrie skins. Both are clad in chainmail and clearly infused with some red hot lava and feature glowing eyes.

There’s also new back bling, like the molten crested cape and the molten valkyrie wings. The wings look like the far cooler option here, since they’d fit right in with your favorite death metal album cover.

Additionally, there’s the Lavawing legendary glider, an armored red dragon that will almost definitely strike fear in the hearts of your enemies.

Twitter user Dakotaz managed to post a video featuring a 360-degree look at the Lava Legends skins if you want a clearer look at them.

Dakotaz’ tweet said the update is coming March 29, but we haven’t seen a confirmation of that, so exercise caution.

The new cosmetics weren’t the only thing leaked. 8.20 will also feature Shaman and Nightwitch skins and two new pirate skins, among other items.