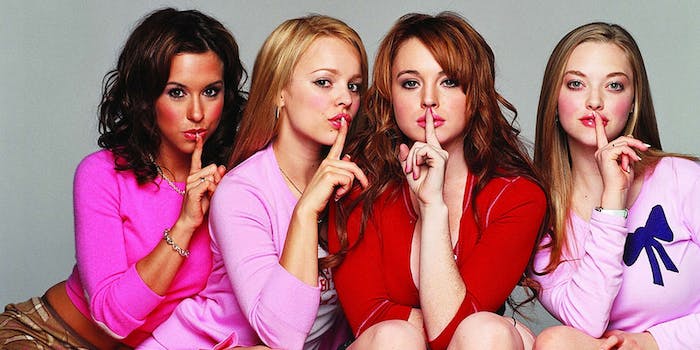 Embrace your love of all things girlie at this Austin-based festival.

In Austin, sometimes a great idea for a festival happens while you’re at another festival.

Brandy Fons, a publicist for Austin’s Alamo Drafthouse movie theater, and Sarah Pitre, a head programmer at the theater and force behind the Forever Young Adult website, noticed last year that the men’s bathroom line was much longer than the women’s at the annual Fantastic Fest film festival.

“And at the time I was obsessed with Pitch Perfect,” Fons told the Daily Dot. “And I started to think there wasn’t a festival celebrating the Pitch Perfects of the world, and I wanted to see the ladies’ line really full as well. Sarah already had an audience with [the Alamo Drafthouse series] Girlie Night.”

Their collective vision came together with Forever Fest, an annual “celebration of girlie pop culture,” which they launched over a weekend last year. This weekend, they’re focusing on the enduring legacy of Mean Girls 10 years after its release. On Friday night, they’ll host a Mean Girls quote-along with stars Daniel Franzese, Jonathan Bennett, and Daniel DeSanto.

“The power of Mean Girls has to be the fact that Tina Fey based it upon a nonfiction book about what it’s like to be an adolescent girl and the cliques and bullying and self-esteem issues,” Pitre explained. “And because it’s based on reality, it still really resonates with people. And with the Internet, I think every scene has been turned into an animated GIF.”

On Saturday, attendees can also take in a Nails Y’all workshop with nail artist Meghann Rosales (and yes, there will be a Forever Fest version of the mani-cam). Amira and Sam, the new film starring Martin Starr (Silicon Valley) and Dina Shahibi, headlines the fest.

Also on Saturday is the Meme Girls: Women on the Internet panel, featuring the Toast’s Mallory Ortberg, the Hairpin’s Jazmine Hughes, Huffington Post Teen’s Taylor Trudon, and Hello Giggles’ Jennifer Romolini. After some general geeking out about how much we all love the goddess Ortberg, Pitre explained why a panel like this is important.

“And one of the things I love about Mallory is that she’s wholeheartedly a feminist, but she’s also got a great sense of humor,” Pitre added. “And I think sometimes people think those things can’t go together.”

Since Forever Fest is focused on women in books, movies, and TV, I asked Pitre and Fons what shows are getting women right. They aptly called out two Comedy Central shows: Inside Amy Schumer and Broad City.

“Broad City is what I wanted Girls to be,” Pitre said. “Not only is Broad City funny and subversive, but the friendship on the show is a really great, strong friendship. I’m hoping that one year we’ll be able to get those girls to Forever Fest.”