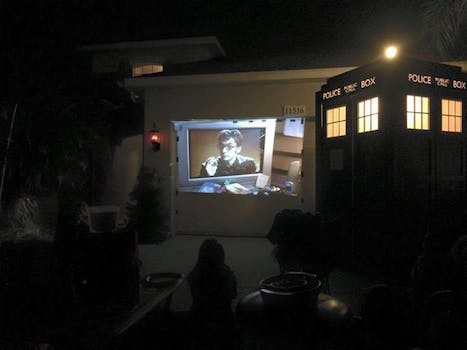 When the local homeowners’ association made a Florida family remove their giant TARDIS from their property, they threw an intergalactic lawn party first.

Doctor Who fans on Facebook turned LeAnn and David Moder into local celebrities after the pair received a notice from their local HOA—just before Christmas, no less—giving them 15 days to remove the giant science-fiction prop from their driveway.

“It has been brought to the attention of the Association that you have a blue call box that needs removed. This is in violation of the Governing Documents.”

As a way of thanking the Who fandom for its support, the family spent the past week hosting a series of epic farewell parties for Tampa-area fans in honor of the police phone box’s short-lived tenure in front of their garage.

“This is a mode of transportation, I should be allowed to put it in my driveway!” LeAnn Moder said in response to the Parrish, Fla., HOA’s request.

Even among the world’s many replica TARDIS machines, this was no ordinary blue phone box. LeAnn’s father built the TARDIS especially for her and David’s gorgeous Whovian wedding in 2012. 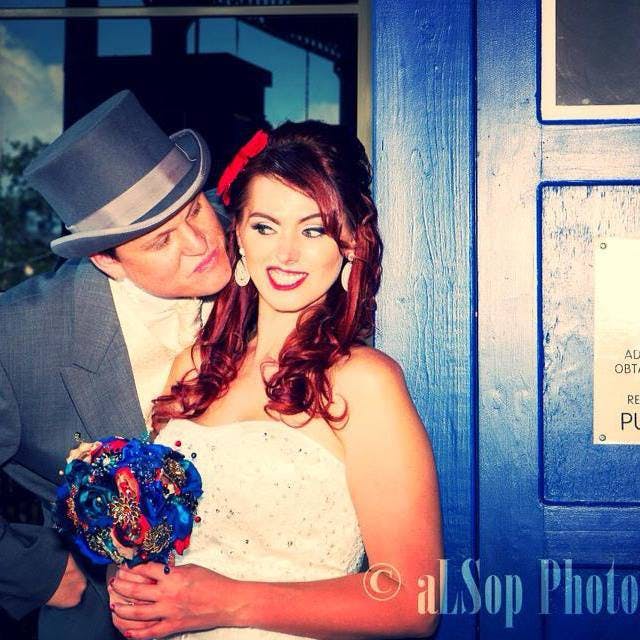 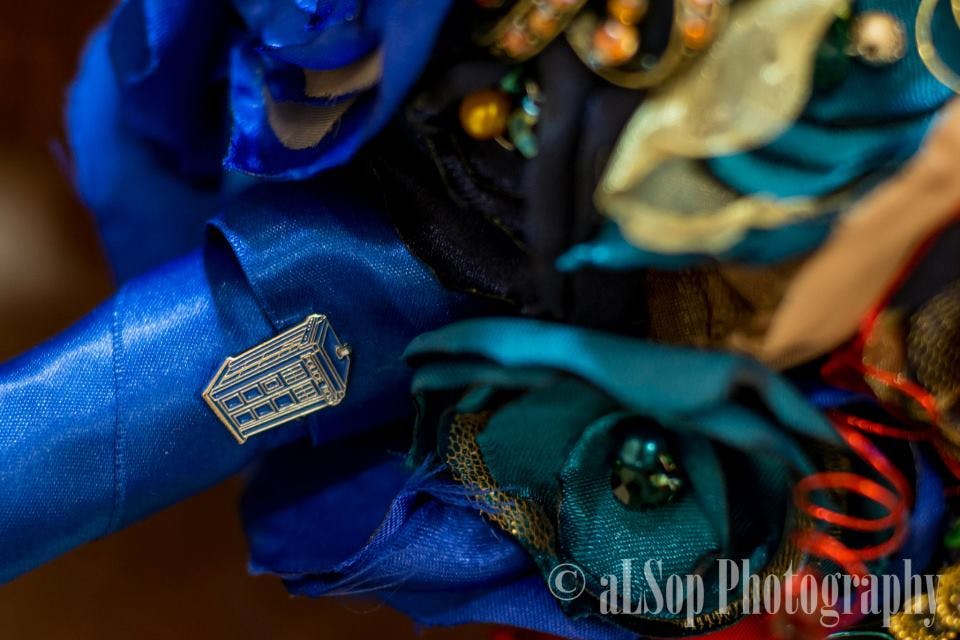 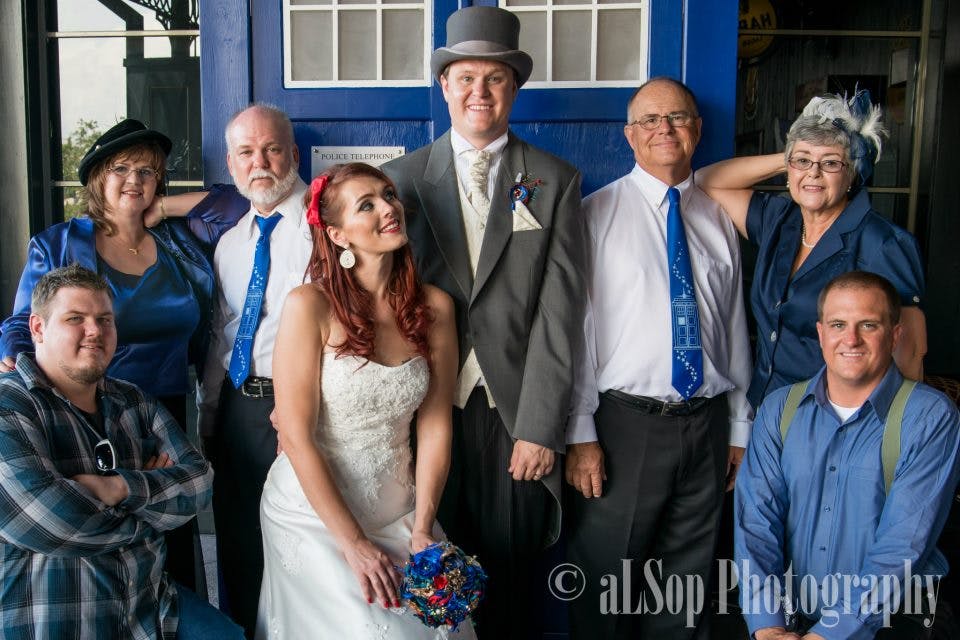 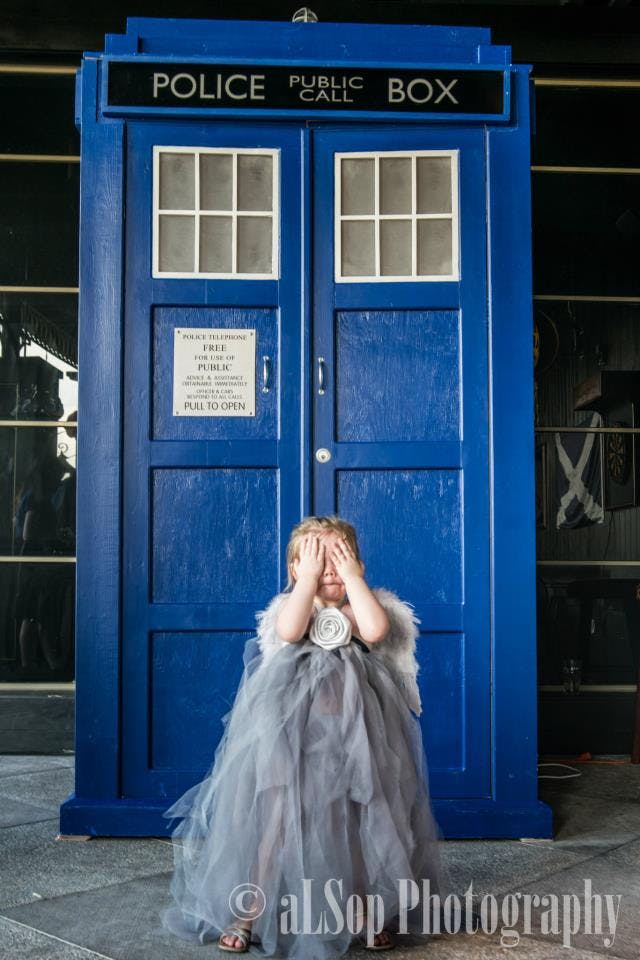 The Moders didn’t just keep their TARDIS all to themselves after their wedding. They offered it up for use in area events, including a local fandom convention last fall, where they made it available for photos. 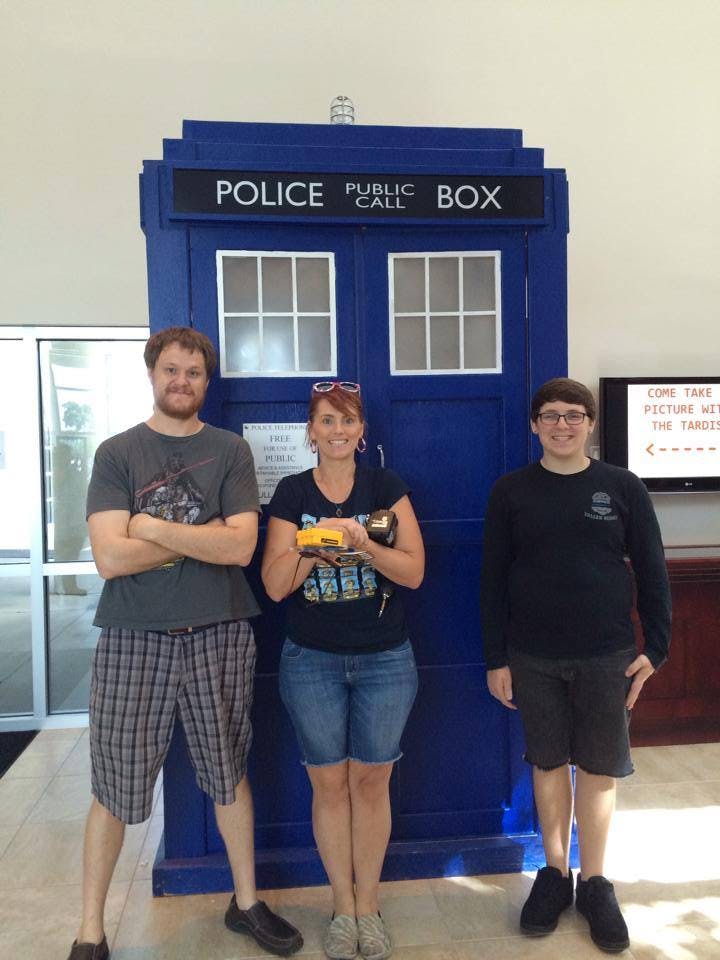 According to a note that LeAnn Moder left on the geek site NerdBastards, the Moders also made the box available for a church mission week, library events, and their neighborhood’s own annual Halloween festivities.

But the neighborhood apparently wasn’t all that grateful for the intergalactic fourth-dimensional puddlejumper in their midst. On Dec. 23, the Moders received an unpleasant Christmas present—a stern notice from their HOA:

“In an effort to improve the overall appearance of Lexington HOA and to enhance property values throughout, the Association continually surveys properties in the community for compliance with existing deed restrictions and standards.

It has been brought to the attention of the Association that you have a blue call box that needs removed. This is in violation of the Governing Documents.

The Violation Committee therefore requests that if you have not already done so, that you take action to correct the above violation within 15 days from the date of this notice.”

The family reacted to the situation in classic Whovian style, namely by pointing and laughing at their detractors. LeAnn Moder posted the “who-viction” letter from the HOA on a local Whovian fan group, where it was shared by an avid replica and cosplay group, the RPF.  As their situation made the rounds on Facebook, the Moders decided to turn the incident into an event. On Saturday, they hosted a “Who-viction” screening of Doctor Who on the lawn of their house. 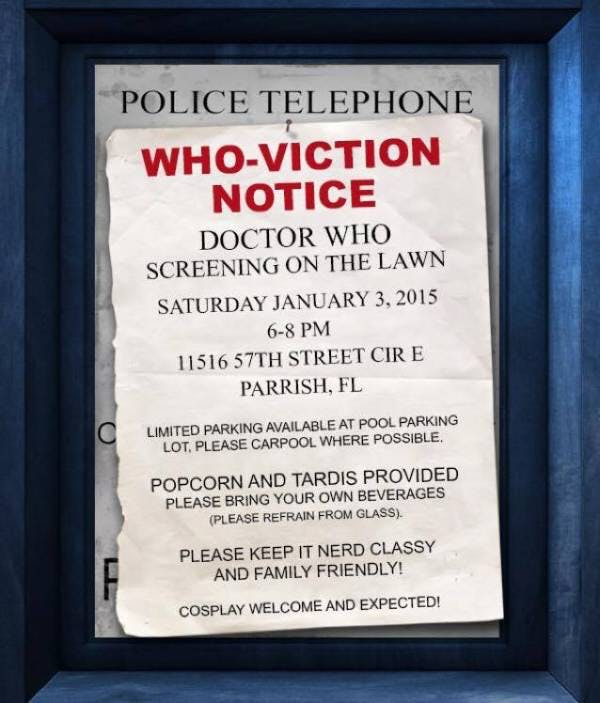 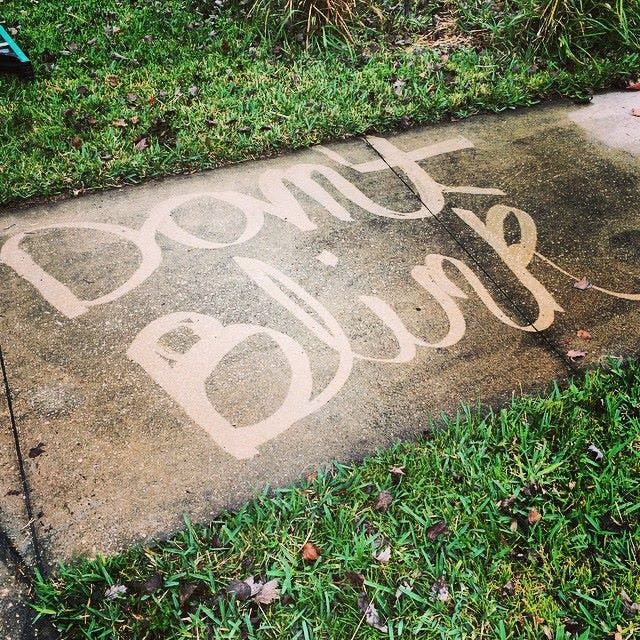 The Moders broadcast the popular Weeping Angels episodes of the show onto the side of their garage. Fans from around the region showed up, and several people posted pictures of the event on Facebook. 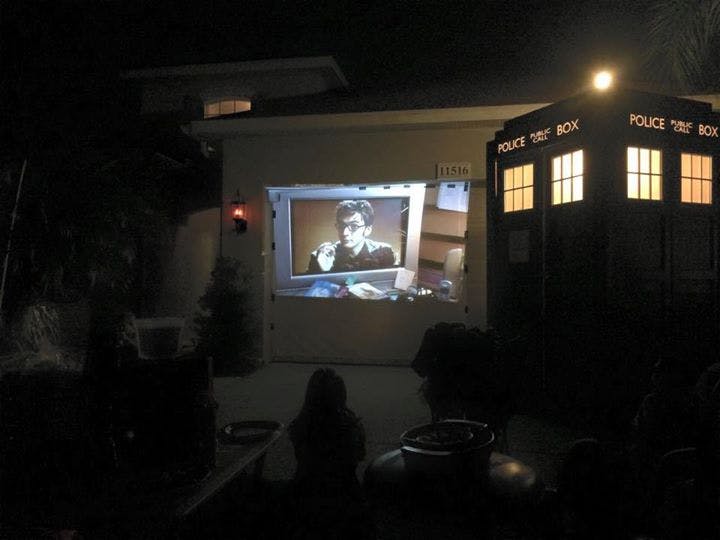 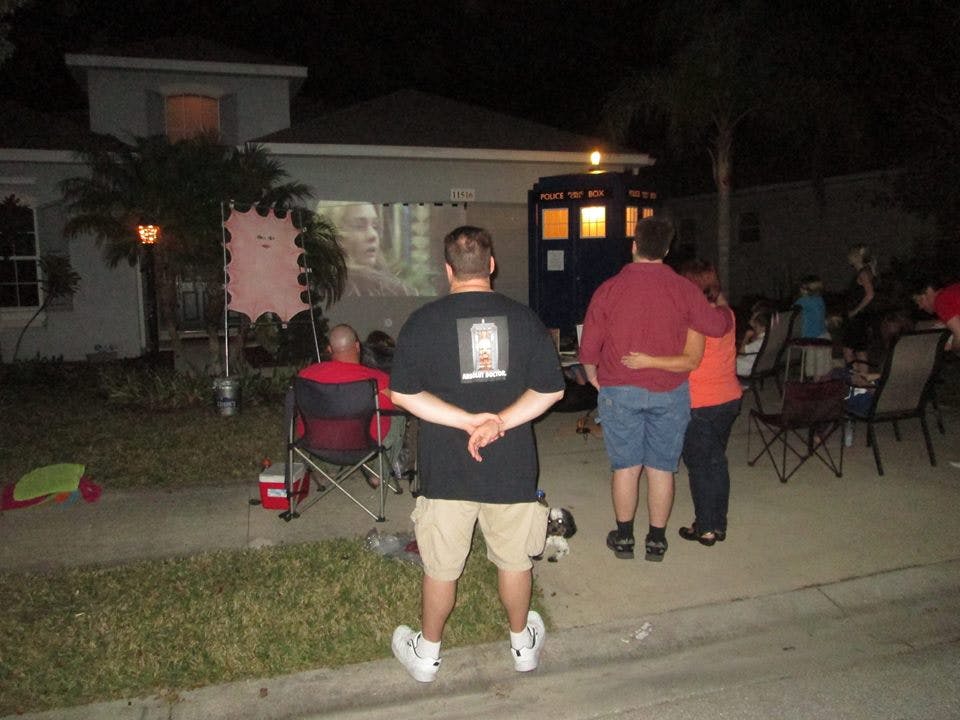 The Moders’ story was picked up by local news and area geek communities. LeAnn Moder even appeared on a Whoniverse podcast to discuss the hubbub.

But the Moders weren’t done. They still had to actually comply with the HOA’s demands. So they turned that into a party, too. On Wednesday, the last day they had been given to remove the TARDIS from their lawn, they threw a moving party and invited the whole neighborhood. 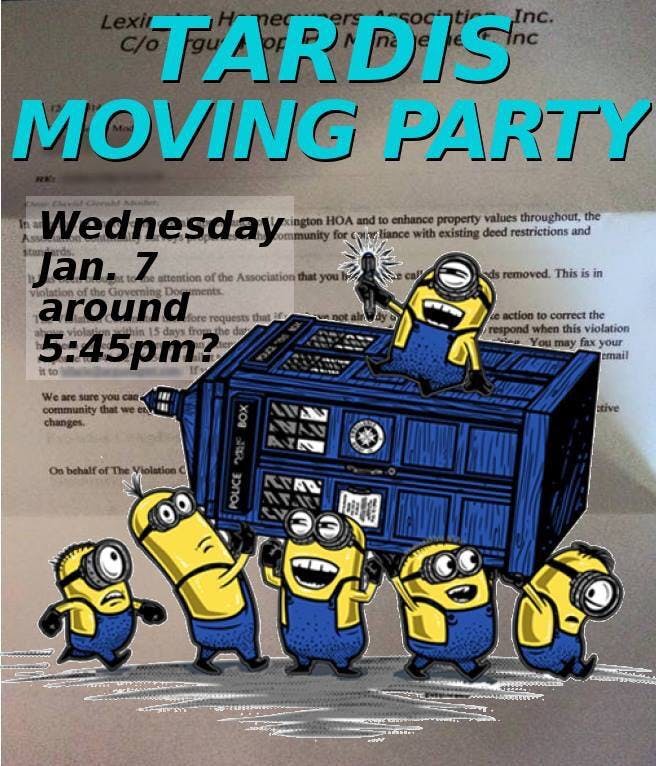 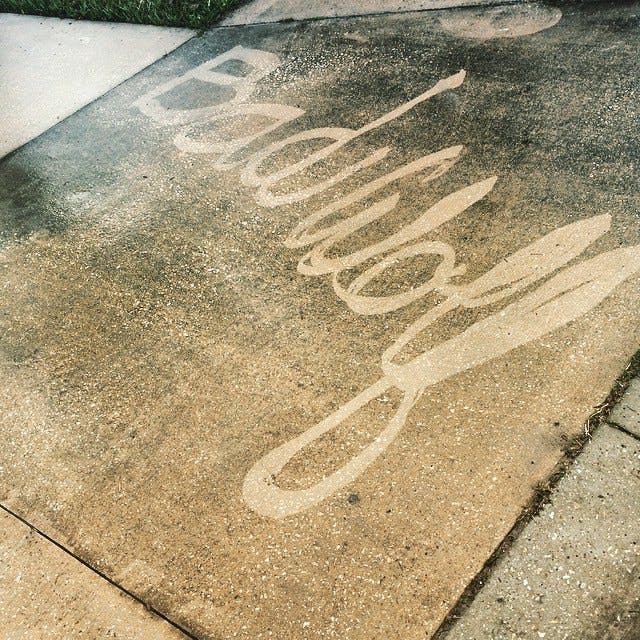 Though the Moders never intended to leave the TARDIS in front of their garage permanently, LeAnn Moder doesn’t harbor any ill will against her HOA. At NerdBastards, she wrote that her neighbors had actually done a lot to make her family’s life wonderful, including banding together to help buy their son an Xbox One after he opened his own lemonade stand.

On the Mark42 podcast, however, she noted the whole concept of the TARDIS box was probably “over the head” of the local HOA president.

The TARDIS will be going back into the Moders’ garage for repairs and refurbishing, after which it will most likely continue circulating at conventions and other community events.