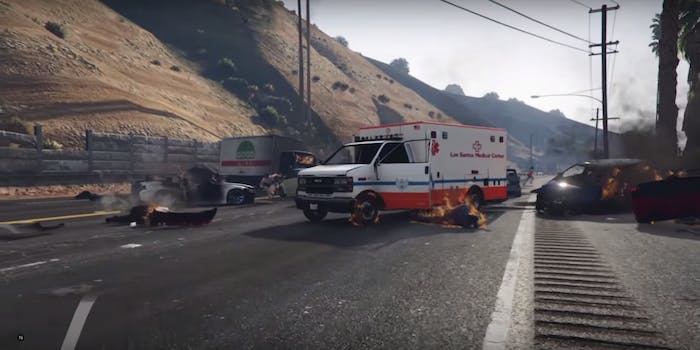 Everyone dies in the biggest Grand Theft Auto freeway pileup ever

The deadliest weapon in Los Santos is the automobile.

This pileup on a Grand Theft Auto highway was so bad that even the fire trucks and ambulances sent to help the victims wound up smashed and on fire.

YouTuber Hookser Don’t has offered documentary footage of one of the longest accidents we’ve ever seen in Grand Theft Auto V. Car accidents in the fictional state of San Andreas are like highly communicable diseases or wildfires in parched forests, and the bigger the road on which the accident takes places, the faster and deadlier it spreads.

The accident in this case started on the main highway on the west side of San Andreas, one of the largest and busiest roads in GTA V, and was therefore a glorious disaster that lasted almost a full five minutes.

New idea for a drinking game: Take a drink for every foiled rescue effort. You might want to skip the hard liquor for this one.