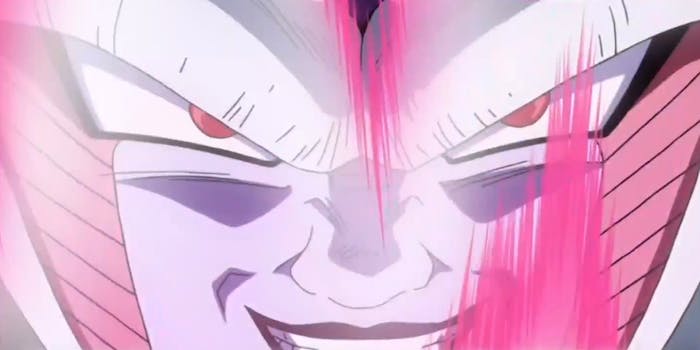 Frieza is back in new Dragon Ball Z movie footage.

In November, Dragon Ball Z fans learned that Frieza, one of the anime’s most well-known villains, would be returning for the upcoming film Dragon Ball Z: Fukkatsu no F. Now, thanks to footage released in Japan, we have our first look at what we can expect from the 2015 movie.

According to Kotaku, the footage below premiered in Japan on the morning show Mezamashi TV. In it, we get a glimpse of the indomitable Frieza, as well as other classic DBZ characters like Goku and Vegeta.

The Anime News Network (ANN) offers the following translation of the Japanese text and narration in the video:

Text: The old enemy wished for by Dragonball fans.

Narrator: The latest footage from next year’s Dragon Ball Z: Fukkatsu no F film has arrived.

Piccolo: He became a monster from another dimension and came back!

Vegeta: What is going on!?

Frieza: Let me show you… My next evolution!

Narrator: Akira Toriyama, who is writing the scripts, brought back Goku’s old enemy Frieza. Frieza is very popular among fans, and the film will be filled with so many action scenes that Akira Toriyama has called them “fierce.”

While there’s no word yet on a U.S. release, it’s likely to happen eventually, given that the last DBZ film, Battle of the Gods, made it to America. Dragon Ball Z: Fukkatsu no F is set for a April 18, 2015 premiere in Japan.