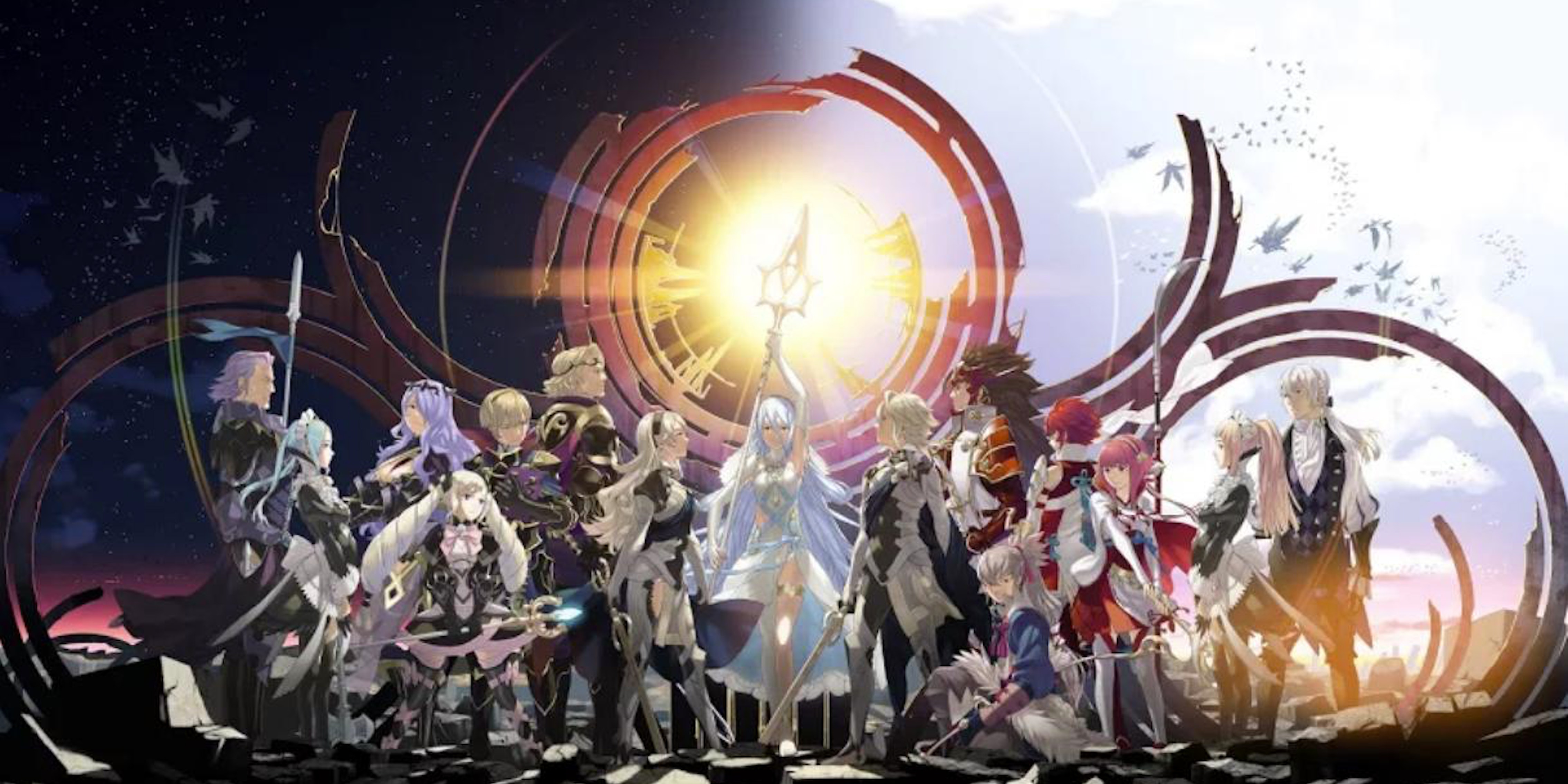 The follow up to the lauded Fire Emblem Awaking on Nintendo 3DS doesn't disappoint.

Fire Emblem Fates is an outstanding pseudo-trilogy that demands both time and mental acuity.

That’s what makes it such a fitting sequel to Fire Emblem Awakening. Both games in the tactical role-playing franchise for Nintendo 3DS employ a “kitchen sink” approach to their designs, albeit in different ways. Developer Intelligent Systems incorporated every appealing gameplay element from the entire, long-running Fire Emblem series into Awakening, propelled by the sense of urgency that it would be the last installment if it didn’t sell more than 250,000 copies. (It ended up selling almost 2 million, and was widely praised by critics and fans.) The way Fates capitalizes on Awakening’s strengths feels more natural than ambitious, expanding a crucial life decision of the protagonist into three paths, resulting in what is essentially three games.

Fates offers a non-critical view on the subject of nature versus nurture. Your avatar/protagonist is the victim of a conflicted identity, due to her childhood kidnapping by the militaristic, European-style kingdom of Nohr. The avatar originally came from the peaceful nation of Hoshido, a land reminiscent of feudal Japan. The initial chapters not only lead up to a renewed conflict between the two sides, but also the avatar’s discovery of her lineage. This presents a branching point. Your choices: side with your blood family, side with the family that raised you, or more intriguingly, take neither side. 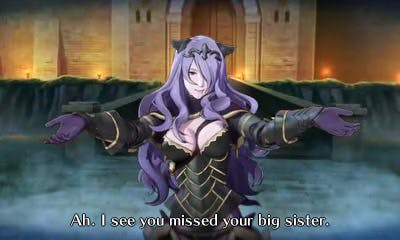 The strategy RPG genre has long since evolved from its basic tactical roots. It’s more than just pitting two opposing soldiers in a two-hit duel and letting stats and a bit of luck decide the outcome. Every long-running series in this genre stands out by the specific set of variables each game presents to the player. For XCOM, the fog of war is one such variable. For Disgaea, it can be the stat boosts from the revenge system. In Fates, classic variables like terrain or which side of your opponent you’re attacking aren’t factors to consider, but don’t think that it’s a simple game.

Success lies in the bonds you make with your comrades in battle—sometimes romantic ones. Those connections grow when characters are standing next to each other or paired up in a single square during combat. Planning a series of moves to optimize a specific relationship creates movement and action limitations that can impact the battle as a whole. Fire Emblem fans will tell you that such challenges are what make the series great. Considering that the neutral path can result in 21 combat-ready offspring from relationships, Fates is certainly not bereft of these stimulating tasks. Fates so effectively drives home the importance of relationships that any attack without a partner or an adjacent comrade feels like a wasted move. 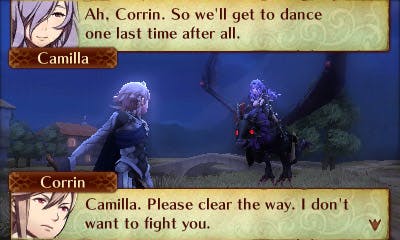 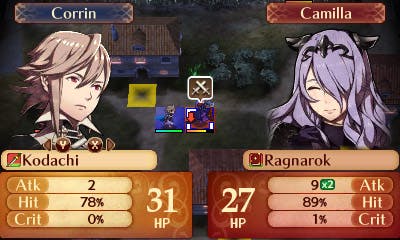 These kinds of turn-by-turn strategy games have always had puzzle elements at their core. A seemingly innocent action can unleash a slew of possibilities and outcomes, many of which can and cannot be anticipated two or three moves in advance. Even at the normal difficulty setting, the enemies are smart and will often focus on the weakest reachable member of your team. How do you maintain specific team members’ health while also taking the fight to the enemy (especially during scenarios with limited moves)? It’s a constant stream of value judgments where employing classic SRPG tactics can only help so much. In Fates you don’t always have to ensure a healer is insulated within a one-tile buffer of stronger comrades. Some healers are perfectly capable of holding their own, like Jakob, the avatar’s butler who also happens to be skilled with a dagger. Even with a full cast of characters to choose from, having the best chance at success isn’t as clear cut as having at least one operative per class.

Told using the eye-catching character designs of Y?suke Kozaki, Fates creates a visually thematic bridge to Awakening, which also features Kozaki’s work. With combatants coming from multiple regions, Fates appears to have been a massive undertaking. The majority of these comrades would not look out of place in Awakening’s equally compelling universe. It also helps that nearly every character exudes personality, including some who initially seem like they would clash with the rest of the growing ensemble. Yet all it takes is a few bonding conversations to see how well each member fits within the team. Some of the best personalities of Awakening included the seemingly dark but highly supportive Tharja and the unassuming yet highly skilled merchant Anna. It’s no surprise that Fates has equally memorable comrades to match, such as the aloof yet immensely talented Orochi, and Reina, whose gentle outward expressions aptly counter her homicidal tendencies. 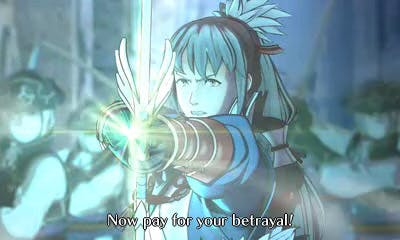 It’s an ensemble cast that excels in diversity, where their collective entertainment value is only exceeded by the unique variables each operative brings into the field. One of the beauties of the Fire Emblem series is how a single character swap at the start of a battle can significantly affect the outcome of the current conflict. In a field with nothing but foes flying on horseback, it’s not unheard of to let the weakness of that enemy type—an archer—take point.

There’s a sense of heightened ownership and control in choosing the 12 troops you take into the field, especially because adjacent characters will bond through their successes in battle. Their traits and how they complement other comrades breeds tons of experimentation. Repeating a failed battle hardly ever feels like a waste of time. When you do lose (and learn), it’s not unusual to laugh because the outcome is always your fault. Fates bombards you with information—from enemy capabilities to your squads’ stats. Any failures are the result of simply not paying attention to all the relevant data. Of course there are scripted twists and unexpected events, but the mid-match surprises the game throws at you seldom impact your characters at your current turn (i.e. new foes attempting an ambush are still a couple turns away from harming you). There’s often time to adjust to these curveballs, and I can’t think of any instance where the enemy AI resorted to genuinely cheap behavior. 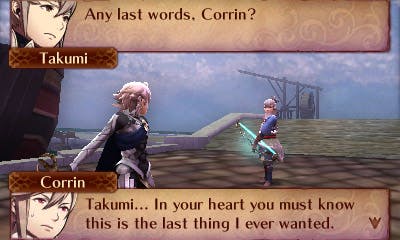 Fates’ three narrative paths are engaging enough you wouldn’t be blamed for sticking to each of the main stories. Yet it doesn’t take long to realize that there’s equally engrossing optional content, not the least of which includes online matches and invasions of your homebase by the AI. Dubbed “My Castle,” this headquarters is a highly customizable haven that allows for added bonding between love interests. This includes meaningful small talk and for the avatar to enjoy private time with a suitor. This fortress functions as a multi-purpose source for activities beyond life and death warfare, where you can do everything from stocking up on gear to betting on friendly arena matches. Don’t be surprised if some of your shorter play sessions are spent more in the castle than in battle, which is a perfectly acceptable way to spend time on Fates. This is especially the case when addressing the needs of your crew, many of whom will have relationship-building conversations or find goods after time passes in the real world.

These options, particularly in the story paths Birthright and Revelation, are indicative of Fates’ superb level of accessibility and appeal beyond combat. Departing from the series’ hardcore origins, Fates has the widest selection of challenge options, so much so that they had to be separated into two categories: difficulty and how character death is treated. You can endure the heartache that comes from permadeath or make things easier with one of two revival options.

Customization isn’t limited to the challenge level and avatar herself (or himself). There’s a noteworthy degree of flexibility on how you choose to see these dramatic attacks unfold. You can see your characters in their 3D model form do battle or keep the bird’s eye view while you simply watch both sides knock off hit points. These options are most welcome, especially if you want to complete a scenario but only have 10 minutes available. And on the subject of visuals, Fates belongs in that small group of 3DS games where keeping the 3D slider at maximum level at all times is actually a joyous viewing experience. This is in partial thanks to the adept camera work that transitions in and out of combat. The only missing feature is a Japanese dialogue option, a very minor issue given that dual audio in Japanese RPG releases has been a common perk in the past decade. 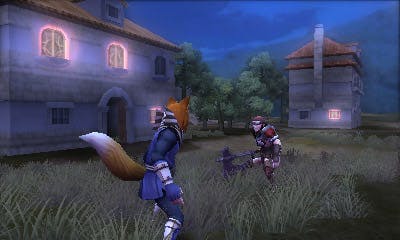 Any critique of Fire Emblem Fates would not be complete without addressing Nintendo’s release stratagem. Along with special edition version that contains all three story paths, Birthright and Conquest are each available as standalone products while Revelation is a downloadable option (available two weeks after Fates’ release). It is a relief that Nintendo’s pricing scheme avoids the dubious label of “triple-dipping.” Whether you buy Conquest or Birthright first, buying a second path via download as well as Revelation comes at a discount.

And aside from the initial five chapters that Birthright and Conquest share, there’s no significant content overlap across the three games. Choosing a side (or no side at all) has ramifications that rival the most meaningful decision outcomes of any Bioware RPG. Each story presents its own unique narrative. It’s not just countless conversations exclusive to each path, but how each story unfolds, driven in part by the successes of your avatar’s battlefield campaigns and how your enemies respond in kind. Moreover, the paths’ branch point was designed well enough that you need to experience those first five chapters only once. Ideally, every Fire Emblem fan should experience it as a single release via the Fates Special Edition, though the disappointingly limited number of copies means that some players will have to settle for downloading Revelation.

Beyond its impressive robustness, Fire Emblem Fates complements its size with substance. It’s not quite the equivalent of getting three Fire Emblem Awakenings in a single release, but it’s nonetheless an impressive follow-up. Fates fine tunes Awakening’s best combat and relationship aspects while carving its own identity with the My Castle home base, creating a rare Fire Emblem that delivers immense value outside the arenas of war. In a month that has already seen another long-awaited sequel to a beloved tactical RPG series (XCOM 2), 2016 is giving fans of the genre a happy problem in terms of managing all the time they will need to beat these games.

Fire Emblem Fates will be released in North America on Feb. 19.